Why Were Seattle Police Far More Restrained During This Year's May Day?

The answer is probably the Department of Justice, which is pushing the Seattle police to make reforms. Among other alarming findings, the DOJ concluded that 57 percent of baton usage by Seattle police was unnecessary or excessive. On May Day, there were tons of cops with batons. But I didn't see any of them swinging.

While anti-capitalist protesters lingered in the middle of the intersection of Broadway and Pine late last night, transparency activist Phil Mocek spotted three men holding cameras in collared shirts leaning against a wall, looking on. Mocek asked them to identify themselves (as they are required to do by law if they're police). After hemming and hawing, Karim Miller stepped forward, introduced himself, and said they were all Seattle Police Department employees. He told us his team was there to document Seattle police's use of force for the Department of Justice, and that an official from the federal monitor's office "was here earlier."

Seattle police were markedly more professional and judicious in their use of force this year compared to last year. In 2013, when anticapitalists and anarchists gathered at Westlake Plaza on May Day, the police response was immediate and aggressive. The march had scarcely turned the corner when police with batons and riot gear began making arrests (for no discernible reason that I could see) and confiscating things people were holding, including pogo sticks. By the time the march worked its way around the block to 5th and Olive, SPD was intent on breaking up the demonstration, hurling flash-bangs and shooting pepper spray at protesters. The police advanced in formation—macing journalists and protesters as they did so—buffeting the crowd up Pine and Olive towards Capitol Hill. That riled the crowd, and some of the demonstrators reportedly broke windows.

This year, none of that happened—even though SPD had indicated it would use the same tactics as in the past.

The anticapitalist march wound its way from the King County Juvenile Detention Center into downtown, crossed I-5 on Pine, met up with another contingent (whereupon it became far more racially mixed than it had been), then went downtown again. Seattle police, wearing lightweight armored suits and riding bikes, simply followed the marchers from behind and on the sides. They did nothing to agitate the crowd, even as protesters shouted invective at them, including chants of "All cops are bastards." The march often felt more anti-police than anti-capitalist. 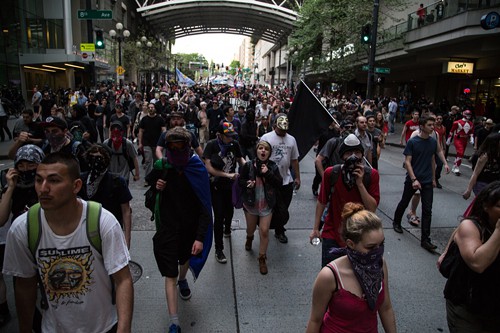 Besides offering a chance for disaffected youth to vent their frustration with our oligarchic, anti-democratic form of government, the march felt aimless. Random people at the head of the procession would arrive at an intersection and shout, "Left!" The march would go left. Tensions shot up, though, when two men in expensive convertible sports cars driving through Belltown suddenly found themselves surrounded by hundreds of angry establishment-haters, who taunted the drivers, jumped on the hoods, and spit on the cars. Both times—it happened twice, on different blocks—police suddenly stopped being passive escorts of the march. They rushed in to form a line around the vehicles. In the case of a brand new white Mercedes SL500, Seattle police busted out the pepper spray and dispersed the crowd and cleared out the entire block.

I saw John Daugharty, an 18-year-old Seattle Academy student, get caught in the middle. "I'm not a fuck the cops guy," he told me, shaking and tearful after being dumped outside the cordon by police. "They were telling us to move back but I couldn't. I had a big pink smiley face banner. I tried to roll into a ball and I couldn’t, so they picked me up and dragged me." And a 19-year-old student, who asked that I not use her name, showed me a bloody gash on her left leg where she said a cop had hit her with a bike trying to move her back, even though she was up against a wall. ("Capitalism is a system inherently based on exploitation and the premise of indefinite growth," she said, "both of which have irreparably damaged human societies and life on earth.")

Other than that, the police were encouragingly chill and restrained. After the Belltown incidents and darkness fell, the marchers returned to Capitol Hill and settled at the intersection of Pine and Broadway, where they hung out in the street playing hackey-sack, blasting EDM music and milling about. They were blocking traffic, but SPD stood by (with paddy wagons around the corner to be used in the event of mass arrests).

Police say they arrested ten people, mostly for alleged assaults. The Blotter says protesters "lit dumpsters on fire and hurled bottles, bricks and firecrackers at officers throughout the night." That's misleading. For the vast majority of the time, both protesters and cops were either walking or standing around. Over the course of six hours, I saw one item—a brick—thrown towards police. It fell short and didn't hit anyone.

"We’re gonna stand here as long as they’re standing over there," Captain Chris Fowler, who directed SPD's May Day response, told me in the evening. "They want to have a street party, that’s fine." He was standing with a group of officers on bikes, chatting and looking relaxed, across from the protesters. Only when the group set a trash can on fire in the middle of the intersection did police deploy gas and clear the crowd away, then withdraw again. The protesters re-occupied the intersection and lit the trash can on fire once more (a really pathetic moment was when they added a second can to the blaze, hooting and cheering). SPD cleared them out again—this time remaining in lines to prevent the crowd from surging back into the street.

By midnight, most of the protesters had gone home, and the police withdrew. A bystander asked one of the cops, who I'd seen locked in an intense (nonviolent) stare-down with a masked protester earlier, how many miles he'd biked on May Day. "We started at 8:30 am," he said, working the marches earlier in the day, then laughed. "I don’t even want to think about it."