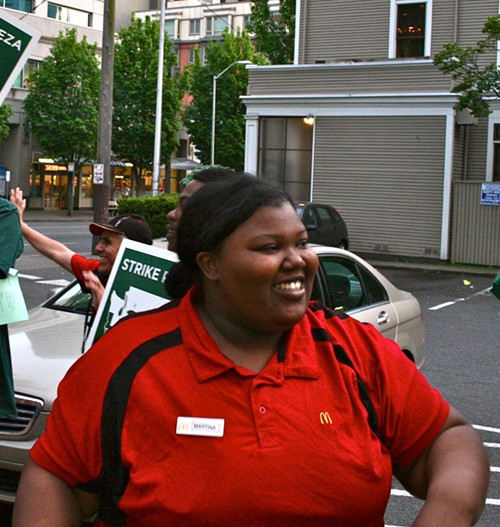 Martina Phelps, 22, works at the First Hill McDonald's. "I pretty much do everything," she told me. But when she walked off the job yesterday evening, she was at the register, "ringing up some customers."

Along with three other employees of the same McDonald's, Phelps joined the national and international protests against fast food working conditions, and for her a major motivator was frustration. "I feel like the owners of McDonald's are not giving us respect and dignity for what we work for," Phelps told me. "Like, they don't care. And that's the reason why me and my coworkers walked off."

In statements, McDonald's has said that the vast majority of its franchises are run by "small business owners" and that the parent company, worth an estimated $97 billion, supports the rights of its workers to protest and will welcome them back.

Phelps, who lives with her mother in the Seattle suburb of Skyway, said she will be going back, but can only "barely" get by on what McDonald's now pays her. "Like, I just had to borrow money from somebody else for bus fare," she said. This job isn't her first choice, but it's what she could find after graduating with an Associates in Art degree from Seattle Central Community College last June. Not long after graduation, Phelps told me, she incurred some major medical expenses. "I left the hospital with a $40,000 bill," she said.

She thought McDonald's might be a way to earn a steady paycheck, save up some money to help with the medical bills, and position herself to go back to school for a bachelor's degree in cosmetic chemistry. Her dream is to work on the creation of new products for a major cosmetics manufacturer like L'Oreal.

The launch of Obamacare has helped her somewhat. "In December I was approved for Obamacare," Phelps told me. "So now my medicine and all that is free." Still, she can't do a lot with what McDonald's pays. It took her two years to get a call-back for her current McDonald's job, so she's realistic about the challenge in finding other work, but she's also realistic about—and frustrated by—the limited possibilities of her current work. "If they paid their workers more, more people would stay," Phelps said. "But since they're not, people are, like, leaving their jobs. This is not a career goal for me... I have bigger dreams. I have bigger opportunities in my face that I know I can do, I just need the money to do it, and McDonald's is not gonna stop me."

In the meantime, she says, "I just simply deserve better, and they're not giving us the respect around the restaurant that we deserve."

Her overall message to people involved in—and following—the strike: "When we fight, we win."

More photos from today's protests in the jump...

This morning at the IHOP on Capitol Hill:

And at the McDonald's on Holman Road in Crown Hill: 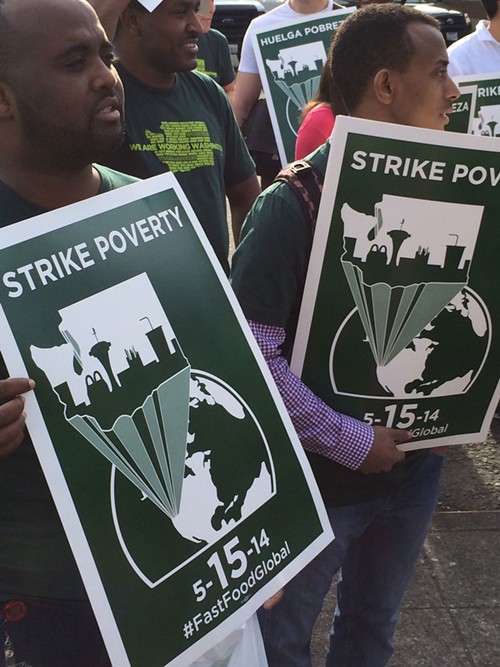 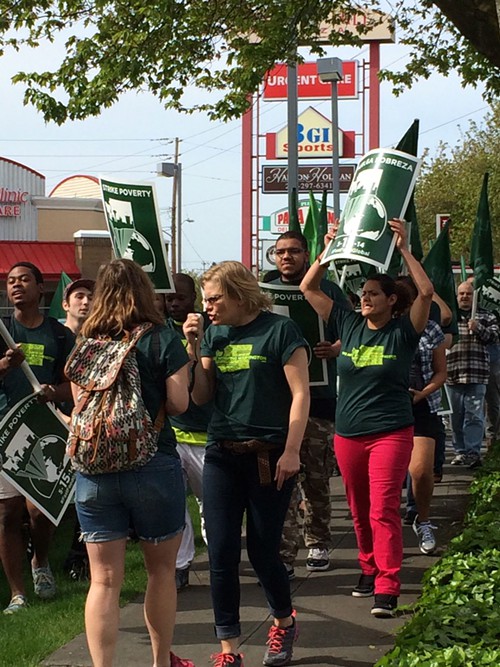