The Babies of Sasquatch! 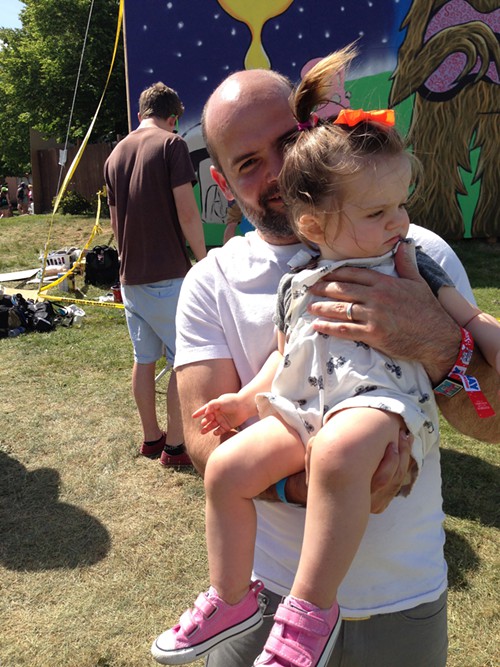 One thing I've noticed at this year's Sasquatch, is the strong baby contingent. People have real babies here, rocking out, having a great baby time. I have a couple of kids back at home in Seattle, and as parents do, I decided to ask these people about their kids, get some helpful tips for toting young children around on such a hectic weekend, and find out if the young'ns were having a good time. HERE ARE THEIR STORIES:
Sponsored

Zack: "We were worried about how she'd take it, but she's liking it. There's enough room so we can avoid super loud music if we need to. Other than that, there's such a variety of bands that you can see cool mellow stuff that she likes."

Stranger: She's having a good time, though?
Absolutely. It's all eye candy, you know. She loves watching people.

Manna and Clint were working at the Tread Light handmade footwear booth. They make all the shoes. Phoenix is naked, wearing sunglasses, dancing to Dude York in the grass outside of their booth. They travel around selling shoes at music festivals. Phoenix went to her first concert when she was seven weeks old. She is a seasoned festival veteran, and appeared to be having a great time.

The last baby I questioned was named Holly. Holly and her mom are from Victoria, B.C. They are camping, but sprung for the premier level to make it easier. It's Holly's second Sasquatch!. They had just enjoyed Cold War Kids, and were excited to see Rodriguez. Holly's mom recommended ear protection. Good call!

A pixel is worth a thousand words.