Nick Cave Brought His Patented Jazz-Punk Vegas Act to the Paramount. And It Was Good.

It's been 25 years since I've seen Nick Cave & the Bad Seeds in concert. I haven't been avoiding them; life just gets in the way sometimes. During that interval, Cave doesn't appear to have missed a step. To judge by his appearance at the Paramount last night, he doesn't look much different, either. He wasn't wearing a gold lamé shirt when I saw him in 1989, but it was a nice touch, especially since he performed 1985's mournful "Tupelo," which references Elvis, who was also fond of lamé. But the slim figure, jet-black hair, coiled-snake moves: some things never change.
Sponsored

Mark Lanegan, looking a little like Scott Walker in his all-black ensemble, opened for Cave, and proved to be as introverted as the marquee act was extroverted, but their styles gel smoothly. Other than "thank you," I don't recall that he said anything else. He performed around a dozen songs with electric guitar accompaniment, including covers of "Mack the Knife" and "You Only Live Twice." He also threw in a Screaming Trees song, "Where the Twain Shall Meet," from 1989's Buzz Factory. I don't know if he usually does that, but I'm glad he did. 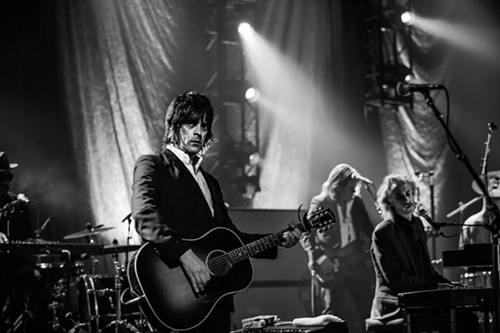 As for the Bad Seeds, the line-up has morphed a few times over the years, but that's no complaint. Cave always picks the best musicians, and this ensemble was no exception, from original player (and ex-Magazine member) Barry Adamson (keys, drums, percussion) to Cave's right-hand man Warren Ellis (violin, flute) with whom he's composed several soundtracks—Adamson looked particularly sharp in shades and pork pie hat. Unfortunately, I couldn't hear Ellis's violin playing on any of the louder numbers, but his flute playing always came though just fine.

"Tupelo" was one of a few songs from early in Cave's career. By this point, his discography is deep enough that he doesn't need to dig that far back for gems, but I'm sure the audience appreciated it as much as I did (I noticed plenty of people my age and older, like King County Executive Dow Constantine, who was positioned near the front of the stage). "From Her to Eternity," title track from Cave's 1984 debut, came off especially well. Other highlights included "Red Right Hand" and "The Mercy Seat," although I have to confess that I like the Johnny Cash cover so much I hoped Cave would use Rick Rubin's arrangement (he didn't).

In terms of his latest album, 2013's Push the Sky Away, Cave did the epic "Jubilee Street," but unless I missed it, he opted out of the spooky "We No Who U R," which I prefer (the videos for both are worth a look; The Proposition star Ray Winstone appears in the former; Into the Void's Gaspar Noé directed the latter). 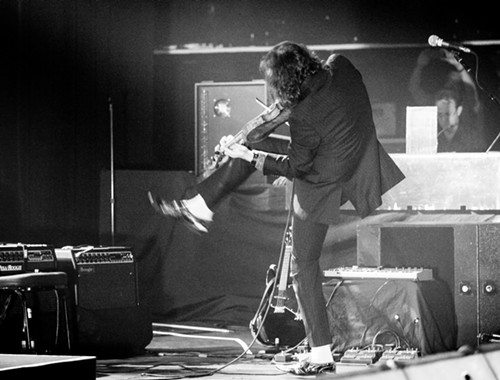 And then, just when I was thinking how nice it would be for P.J. Harvey or Kylie Minogue to drop by—stranger things have happened—he brought out Lanegan for "The Weeping Song." Mark sang the first half, Nick the second. Nothing revelatory, but it sounded good. "The great Mark Lanegan," Cave said as he left the stage (and if you enjoy the Cave-Minogue combo as much as I do, she appears with him in 20,000 Days on Earth, which plays the Grand Illusion on July 9 and 10).

If Cave performed some of my favorite songs—with the exception of The Mercy Seat's "Deanna"—he also performed some of my least favorites, but then, I'm just not down with the ballads, like "Into My Arms," which mars a great melody with cringe-worthy lyrics, like "I don't believe in an interventionist God / But I know, darling, that you do." I'm sure there are people who find that romantic, but I'm not one of them. Nonetheless, Cave's voice was in fine form—his piano playing, too.

It was also a fine night for T-shirt spotting. Naturally, there were a lot of Cave shirts, but some punters got more creative with tees featuring the Birthday Party (Cave's pre-Bad Seeds outfit), the Legendary Pink Dots, Les Rallizes Dénudés, and a vintage KCMU "400 Shocking Watts of Power" model.

Though some cities on the current tour have gotten as many as five additional songs—including fan requests—Cave's Seattle encore consisted of only one: 2004's junkyard operetta "The Lyre of Orpheus." Fortunately, it was a good one.