So Where Do I Smoke All This Legal Pot Again? 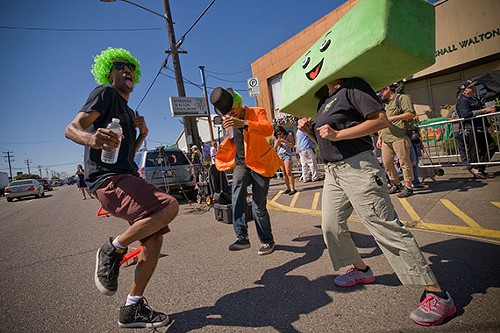 Legal, recreational retail pot sales have begun in Washington. Which leaves everyone with a very pressing, immediate question: Just where are we supposed to smoke this stuff?

The simple answer: in private.

Washington's Initiative 502 created the legal framework for a retail market, creating licenses that allow people to grow, process, and sell marijuana, and allowing people over 21 to buy and consume it. But it also said you can't consume pot (smoke it, eat it, vape it) in public and created no such licenses for bars, cafes, coffeeshops, or clubs that would let the public consume pot on their premises. People think of Amsterdam, where there have long been "coffeeshops" that sell pot and allow you to sit there and smoke it—it's not legal, but the government looks the other way. But here in Washington? "The law states you can’t consume within view of the general public," says Washington State Liquor Control Board spokesman Mikhail Carpenter. "There's no provision in the law for consumption in public. That's in the law, that's not something we can change."

However: If you don't have a liquor license, and you don't sell marijuana, the WSLCB doesn't have jurisdiction over your activity. In that case, says Carpenter, "if you want to establish a private club for the consumption of marijuana, that's between you, your local authority, and of course the Clean Indoor Air Act." (That's the state law that bans smoking in most indoor places.) The only way to change the state laws about public consumption and create public spaces for pot-smoking, like Amsterdam-style coffeeshops, would be through the state legislature.

On a local level, cities could potentially create licenses for private clubs, skirting the public-place rule and addressing what Seattle city attorney Pete Holmes has identified as a real problem: Where the hell are pot tourists supposed to smoke? And what about people who rent non-smoking apartments? In a letter to the WSLCB last June, Holmes said clearly, "For renters and tourists, allowing marijuana use in certain types of establishments other than private residents may be the only mechanism to enjoy marijuana. This is both a race & social justice and an economic development issue." Because: If you don't own property, you basically can't smoke pot anywhere. Damn right, Pete. In that letter, he specifically asked the WSLCB to study and create rules for private clubs. But as Carpenter says, that may be outside their jurisdiction, and something for cities to look into themselves.

Holmes's spokeswoman, Kimberly Mills, says he hasn't yet "drafted a formal plan," but he's "working in tandem with City Councilman [Nick] Licata" to create one this year. "Meanwhile," Mills reminds us, "Pete requested and the Council adopted a $27 ticket for smoking marijuana in public, consistent with the $27 ticket for drinking in public." 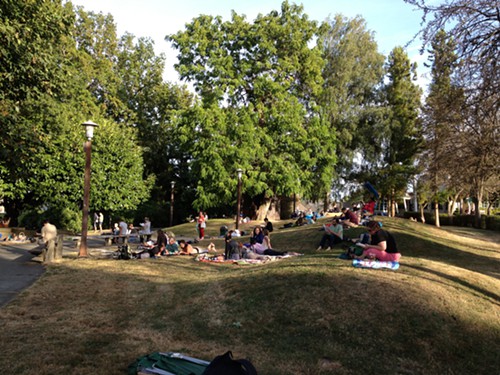 So for now, tourists and renters, Seattle says to you: Smoke in a smoke-friendly hotel or at your friend's house—or gamble with your chances and smoke on the street or a park, and potentially face a $27 fine.

How might it look in the future, when our slow-moving city or state finally realize they've put people in a weird catch-22? For that, we can turn to Colorado.

Cheryl and David Fanelli opened up the first legal, government-sanctioned pot cafe in the United States on April 20 of this year, in Nederland, Colorado. It's called Club Ned, and the Fanellis fought for 15 months for the right to open it, following a narrow private-club exception to Colorado's public-smoking law. Requiring patrons to become dues-paying members, having three or fewer employees, and not making more than 49 percent of their income in food and drink sales means Club Ned is following all the rules—though they did have to get state law changed to allow them to follow rules that were written for tobacco.

Cheryl Fanelli says she immediately had the same concerns that Holmes has defined here in Seattle when she saw Colorado legalizing recreational pot without legalizing any public places to smoke it. "That’s what I told lawmakers here," she says. "We're asking people to drive thousands of miles to come buy legal pot, and then they're supposed to become criminals when they walk out the door? That's really not fair."

She sent around a petition in Nederland, a small town of around 1,300 people, to demonstrate that there was public support for her pot club. "And I got 300 signatures in a week," she laughs. "I had people that signed our petition who were against cannabis, but they signed my petition so I could open because they felt that yes, this is supposed to be treated like alcohol, it’s legal, there should be a place where people can smoke it." Has she had any problems so far? "There haven't been any problems," she says. "Cannabis people are the nicest people." Later, she amends that a tiny bit to say the only problems they've had have been with patrons who arrive already drunk, who are asked to leave. They have game nights, live music, potlucks. It's much more peaceful than a bar, Fanelli adds.

"Nobody was ready for this, but they should’ve been. It really was an oversight, as far as I'm concerned. You have people coming to legally buy this stuff, where are they going to smoke it? This is an obvious question that they're just ignoring." And Washington State is, idiotically, following in those footsteps. Maybe eventually entrepreneurs like the Fanellis will find ways to bend state law here, or Holmes and the city council can make some local legal room for licensed private-use clubs.

In the meantime, in Colorado, Fanelli says they're going to start selling Club Ned franchises.