Dawn of the Planet of the Apes: An Interspecies Western Set in the Not-Too-Distant Future

I went to see 2011's Rise of the Planet of the Apes out of curiosity more than anything else. I'd never heard of the director, but he'd assembled a solid cast, so I thought, "What the hell" (I was also fond of the original films with Charlton Heston and Roddy McDowall). To my surprise: I loved it. Nonetheless, I decided to keep my expectations in check for the sequel, which turned out to be a wise move, because I didn't like it quite as much. That's how it usually goes with sequels, although every once in awhile, a Catching Fire comes along, which I found superior to the first Hunger Games in most every respect.
Sponsored

In this case, Cloverfield director Matt Reeves, taking over from Rupert Wyatt, sets the action 10 years after Rise. Caesar (the invaluable Andy Serkis), now a mate and father, leads his tribe, who lives in Muir Woods, much like Native Americans of the 18th century—right down to the horses they ride and the war paint they flaunt when they go out on a hunt. Due to the virus unleashed upon the world at the end of the last movie, most of the human population has expired, including Caesar's former minder, Will (James Franco, who appears in a brief flashback)—or at least that's what the three person-penned screenplay means to suggest.

So far, so good, except it strains credibility that the apes wouldn't know about the community of humans living only a few miles away in the ruins of San Francisco—and vice versa.

Instead, the apes assume they've all died. As Maurice notes, they haven't seen any in two years (Karin Konoval's orangutan is just as lovable here as he was last time around). But then, a small band of homosapiens enters their enclave hoping to bring a hydroelectric dam back to life, since their energy supplies are dwindling. The group includes Malcolm, a widower (Jason Clarke, very fine), his girlfriend, Ellie (Keri Russell, who worked with Reeves on Felicity), and his teenage son, Alexander (Kodi Smit-McPhee).

After a period of wariness, the humans and the apes make an uneasy peace, but both bands include troublemakers who ensure that there will be a third film. They include Dreyfus (an uncharacteristically off-key Gary Oldman), who lost his family to the virus; Carver (Kirk Acevedo), a trigger-happy idiot who holds the apes responsible for the killer strain (they aren't; human scientists created it); and Koba (Toby Kebbell), a former lab rat of a bonobo with a hatred for humans. 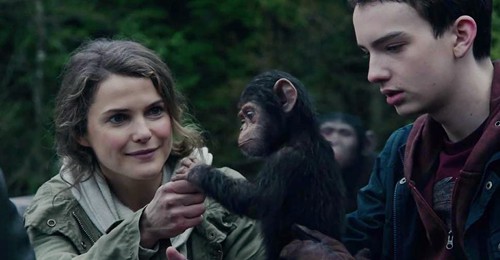 Due to a series of misunderstandings, any chance of lasting peace between the two groups comes to a swift end, leading to stabbings, shootings, and explosions, but the deaths are relatively bloodless in order to retain that all-important PG-13 rating. Caesar and Malcolm manage to forge a friendship, but the film ends with the possibility that they'll battle each other in the 2016 sequel, which Reeves is set to direct.

Consequently, the end doesn't satisfy the way it should, since it's more about setting the stage for the next film than bringing this one to a close, though I like the way it starts out as a western before seguing into a war picture. Also, Charles Burns's graphic novel Black Hole ends up playing a small role in the scenario. If Dawn of the Planet of the Apes does nothing else, I hope it encourages more people to read the book—which David Fincher intended to adapt at one point—and put some money in the coffers of this very deserving artist.

P.S. I reached out to Burns to find out how Black Hole made it into the movie. Aside from the fact that he got back to me right away—I wasn't expecting that—he directed me to this piece, which has the full scoop. Burns added, "I watched the original movie in Yakima, WA, when it came out, and even though it wasn't as good as I wanted it to be, I remember liking it—anything with Charlton Heston can't be all bad." (As a fan of Touch of Evil, Soylent Green, etc., I couldn't agree more.)

Dawn of the Planet of the Apes opens on Friday, July 11, all over the place, including SIFF Cinema at the Uptown. As for Charles Burns, he'll be appearing at Fantagraphics on Sept 19 to sign copies of his new graphic novel, Sugar Skull.