We saw more bands and wore more sunscreen for this fine Saturday edition of Capitol Hill Block Party Oh-Fourteen! All the bands! A lot of the bands! Bands bands bands!

This post was updated with fresh reviews and photos as they came in. We are now done reviewing Saturday. Enjoy! 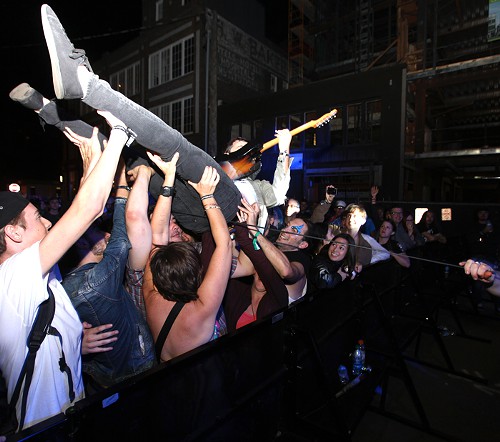 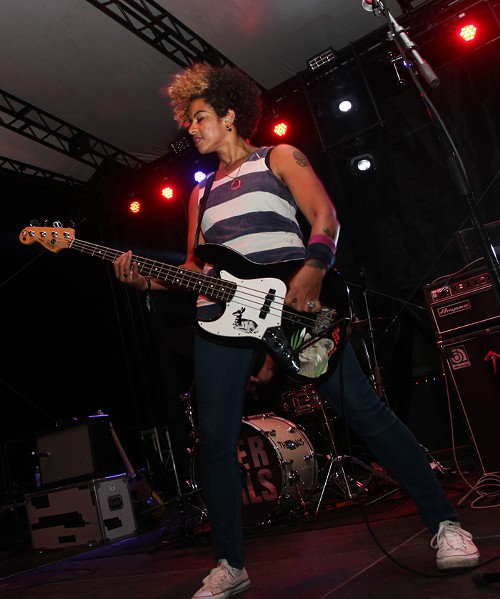 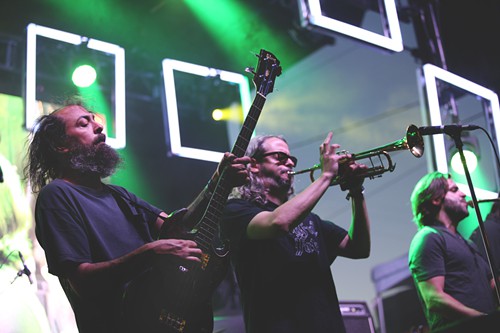 Budos Band: Dave Segal tells us, "The Budos Band seemed a bit drunker and sloppier than the last time they tore up Neumos in 2012 (baritone saxophonist Jared Tankel dropped countless F bombs between songs), but the nine-piece NY ensemble still sounded like a raucously funky amalgam of the Fania All-Stars, Fela’s Africa ’70, and the J.B.’s. 'Sorry,' a short woman dancing in front of me didn’t say after repeatedly bumping her backpack into my nuts. The things I do for you readers…'" 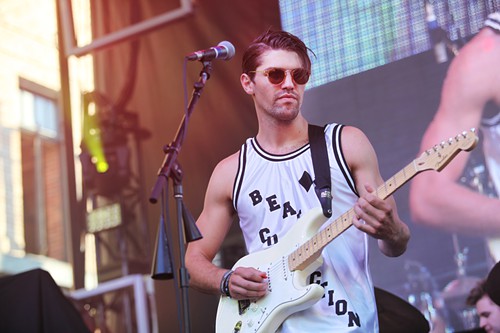 Beat Connection: Todd Hamm tells us, "Now there's a local group done good. Performing as a quad, the guys strike the perfect chord between Washed Out and Blue Sky Black Death, which is is pretty fucking good chord, yo. Also, has anyone else noticed the surplus of bodysuits in the crowd this year?"

Future Shock: Dave Segal tells us, "Wearing masks out of Eyes Wide Shut, Seattle foursome Future Shock fused Prince’s rock-guitar histrionics with Rick James-ian new-wave-y funque (ca. Street Songs), making me flash back to listening to the Electrifyin’ Mojo on Detroit radio circa 1982 (which was probably before any of these Future Shock dudes were born). One of the group’s vocalists, the Doctor, said with a degree of bravado, 'We just wanna take over the world.' Good luck with that."

CYMBALS: Kathleen Richards tells us, "CYMBALS' 45-minute set of pleasantly jaunty synth-driven pop was the perfect way to kick off the second day of Block Party. With songs hovering around a comfortable 110 bpm, the London band coaxed the early, still-sleepy crowd into swaying on its feet, and even taking a step or two. How did they do it? 'The guitar on the off beats made it so dancey,' noted one observer." 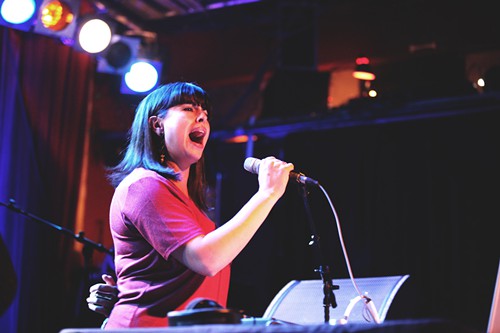 Natasha Kmeto: Kyle Fleck tells us, "Natasha Kmeto packed the house to capacity at Neumos and rocked a fair bit of new, sultry electro material. The bros with the camelbaks and lord knows what else rolling around in their system couldn't get enough."

Hundred Waters: Kyle Fleck tells us, "The hushed and sepia-toned melancholy of Hundred Waters' electronic folk kept the audience rapt as the sun went down on Vera Stage, in a dramatic example of atmosphere fitting the sound perfectly. Even the girls with the Pikachu face paint were swayed into silent, serene swaying."

Sashay: Kelly O tells us, "Merriam-Webster says Sa·Shay is an:

'intransitive verb'— to walk in a slow and confident way that makes people notice you
a : walk, glide, go
b : to strut or move about in an ostentatious or conspicuous manner

I say Sashay are the most gay hardcore-punk band you will ever see in Seattle. That's all I can say. (That, and go see Deadkill tonight, same stage—Cha Cha, 8:45 pm.)"

Great Goddamn: Kathleen Richards tells us, "The bass can be a very sensual instrument—apparently, even when that bass is incredibly loud and rumbly and feedback-y. And when paired with aggressively bashing drums. Case in point: The young couple that began enthusiastically making out (we're talking grinding and ass-grabbing and straddling) at the beginning of Great Goddamn's set. They danced and held up their tall boys as if they were at the sweatiest of frat parties. At the end of the set, a girl remarked, 'For two people—that energy?' although it was unclear which duo she was referring to."

Seattle Parks: Emily Nokes tells us, "Mayor Ed Murray is really repping this Seattle Parks band, but I don't see them on the schedule anywhere."

Bad Motivators: Todd Hamm tells us, "A combination of bad motivation and bad public transportation caused me to miss the Bad Motivators' set, but when I finally got to the Cha Cha, the band was taking a picture with a cardboard cut-out of a Tusken Raider and were in great spirits. 'I feel really good about it,' said bassist Nathan Chambers. He also said they finished with a Pixies cover, which is always a good move."

Audacity: Emily Nokes tells us, "I ran into the excellent Matt from Audacity after their show, and he did a sweet self-review of what went down: 'I borrowed an amp from Kate from Big Eyes, and during the middle of our set, I think the input… well I was trying to figure it out, and I hope I didn't break her amp. But the show itself was like a cherry without a pit—it was perfect. I mean, there was a pit… a bro pit [laughs].'"

High Ends: Dave Segal tells us, "For most of their set, Vancouver’s High Ends offered medium-energy pop full of melodic Vitamin D, but their final brilliant cut, 'Ocean Song,' came off like wistful motorik rock for British Columbia highways rather than the Autobahn. My attention was diverted by a persistent young man in a backward ballcap asking me if I had any coke or Molly; after telling him no, he said, 'Man, I have $100…' In retrospect, I should’ve sold him my caffeine pills."