It's the last day of Block Party! We're going to see pretty much every band today! All the bands! A lot of the bands! Bands bands bands!

This post was updated with reviews and photos as they came in. We are now done reviewing Sunday (and need to sleep for the next week). Enjoy! 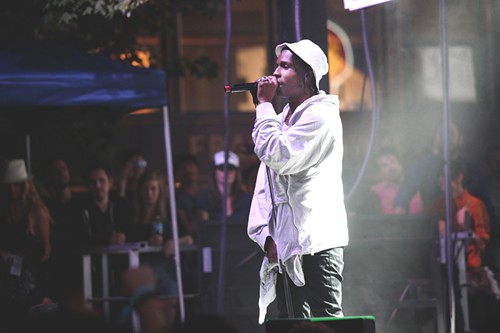 A$AP Rocky: Emily Nokes tells us, "Rumors of a missed flight and possible no-show circulated before A$AP Rocky started his set about an hour late. 'I fuck with Seattle,' said A$AP, when he finally got up there. 'He fucks with us!' said an excited twenty-something dancing next to me."

Dum Dum Girls: Kathleen Richards said, "Dum Dum Girls played their dark and smoky dream pop to an appreciative audience Sunday night, and while their set was clearly well rehearsed (the three- and four-part harmonies were especially impressive), it lacked any sense of spontaneity. Not that their fans minded. After their last song, a man (unsuccessfully) demanded, 'More music!'" 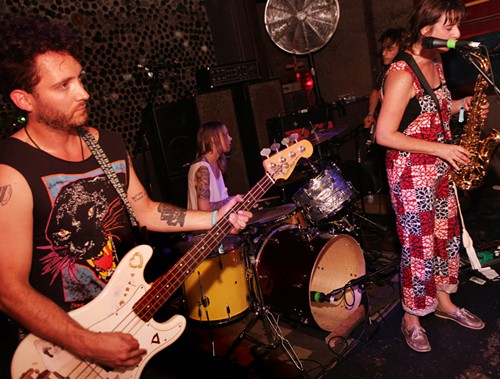 Stickers: Emily Nokes tells us, "Stickers sounded better than ever in the Cha Cha basement—the red, sauna-like room was the perfect setting to hear their new songs live; frontwoman Gabby's powerful voice and sax wail resonated through the humidity. 'I'll trade my soul for another song,' yelled a (somewhat annoying) crowd member before their last song. 'We might be able to PayPal that?' mumbled Emily from behind the drums." 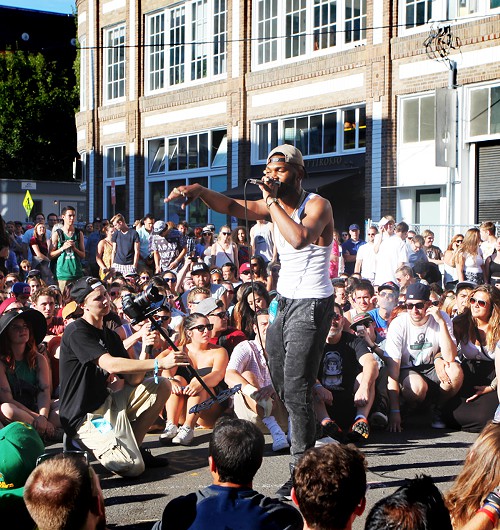 Raz Simone: Kelly O tells us, "Raz Simone told the entire crowd at the Vera Stage to just 'sit down.' And they did! He rapped in the audience, forgetting the stage completely. Eventually he told them to stand back up." 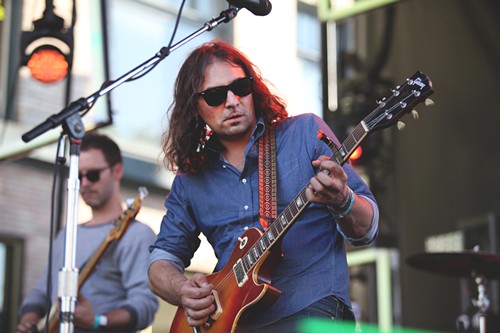 Pollens: Dave Segal tells us, "Pollens’ PhD-level pop—full of gorgeous undulations, unpredictable melodies, and outrageously brash vocal arrangements—should be way more popular than it is, but as they’re one of the few local groups looking outside of the Anglo-American sphere for inspiration, maybe that’s preventing more from grasping it. 'This?' singer/keyboardist/flautist Hanna Benn responded to an audience member. 'This is a sruti box—s-r-u-t-i box.' Devil horns!"

Dude York: Andrew Matson tells us, "Some say Block Party is out of touch with the neighborhood, but 'I walked six blocks for this,' said Dude York drummer Andrew Hall during their Neumos set. 'That's what we call #communityarts.' Someone in the crowd said, of the set, 'My first time seeing them. Good. I liked the drummer. Eight out of 10.'"

XXYYXX: Dave Segal tells us, "XXYYXX’s set triggered lots of smiles and dancing in the scorching sun by toggling between buttery bedroom R&B and fast-twitch footwork tracks—like if Flying Lotus or Traxman were more focused on seduction than complex beat science. A local electronic-music producer said, 'This is cool, but I’m getting tired of shows done with laptops and MIDI controllers; we need something more. I’d rather go see a bluegrass band at Nectar, to be honest.'"

Nacho Picasso: Andrew Matson tells us, "Nacho Picasso began his set on the 95 Slide roof with 'Phantom of the Opera' and just like a few years ago at #CHBP, hella people rapped along to the lyrics about not caring whether or not you have a college diploma—he should have been on the main stage. 'I fuck with Nacho,' said a local DJ in the crowd."

Gaytheist: Kathleen Richards tells us, "Every song is an explosive, tightly edited package of, in their words, 'totally fucking intense shit,' but with tongue-in-cheek lyrics about falling in love and the provincialism of Washingtonians, among other fun topics. And that drummer—what a monster!"

Haunted Horses: "Haunted Horses dug deep into the industrial music tote bag as Troy Ayala took a real-life power drill to his bass strings. I didn't even give a shit when they fucked up an intro ('We fucked up,' said drummer Myke Pelly), the Horses were clydesdale messengers of terror and brought the sweaty crowd to its collective knees."

Kithkin: Todd Hamm tells us, "Multiple singing percussionists, a loose band member playing a maraca in the (generally euphoric) crowd, deep-throating microphones—it's business as usual for Seattle's Kithkin. The chanting wears a bit, but the willingness to experiment, coupled with their powerful instrumental freak-outs bode well for the tribe of 'treepunks.'"

Ricky & Mark: Andrew Matson tells us, "A seemingly spontaneous combo of North Seattle emceeing over beats by Blood Brothers' drummer Mark Gajadhar (on guitar and e-drums), proved to be droning and upbeat at the same time. 'Not a big crowd, but they're fun,' said a photographer.'"

Manatee Commune: Todd Hamm tells us, "Grant L'Kayl Eadie, better known to non-Bellinghammers as Manatee Commune, supplemented A-grade knob twisting with live percussion, guitar, and violin (all played by him). His attention to texture, and successful integration of various sound sources set him apart from the sea of atmospheric electronic artists filling bills across the nation. The crowd was properly bedazzled."