Why Did Mayor Murray Bash a Veteran's Family After Intervening to Stop Their Eviction? 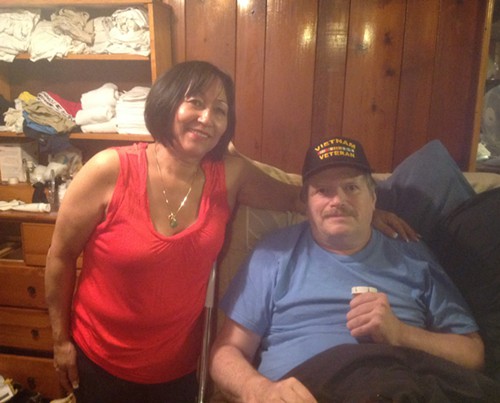 On July 21, Mayor Ed Murray sat down with anti-foreclosure activists, committed to ending veteran homelessness in Seattle by 2015, and instructed Seattle police not to remove Byron Barton, a disabled Vietnam veteran, and his wife Jean Barton from their home in West Seattle.

That made Triangle Properties, which Council Member Sawant has called a "developer that specializes in buying up foreclosed homes," really pissed off. Triangle bought the house at auction on April 11 after the Bartons were foreclosed upon by Chase Bank. After the mayor's intervention, the company filed a legal complaint to compel the city to enforce trespassing laws and evict the Bartons.

According to the mayor's office, a judge ruled yesterday that the city is within its rights to use discretion in applying the law. The judge said now it's up to the King County Sheriff to enforce the eviction order.

"The Bartons don’t belong there. They’re not the legal owners of the property," Sergeant DB Gates, a spokesperson for the sheriff, told me today. "It’s in the hands of the courts. And we will always follow a court order." She wouldn't say any more than that about the prospects for an eviction.

Meanwhile, the Bartons are challenging the legality of their foreclosure in court. Chase Bank and Quality Loan Services haven't responded to the suit yet, and it could be months before it gets resolved. But foreclosures have been overturned before because of malpractice by behemoth banks.

"The Bartons should not be removed from their home until the court can rule on these legal claims since these issues are currently in dispute and are the subject of litigation in King County Superior Court," Jill Smith, their lawyer, says in a letter citing several previous cases of overturned foreclosures sent today to Murray, the City Council, and City Attorney.

So far so good. The mayor wants to help vulnerable veterans (if he didn't, that would alarming). And he took action—after anti-foreclosure activists put their bodies on the line and created a damning spectacle as King County Sheriff Deputies attempted to evict the Bartons last month.

Here's where Murray's messaging gets weird and unseemly, however. His statement on the court ruling included this passage:

Representatives from the City’s Office of Housing as well as the Human Services Department have been in almost daily contact with the Bartons ever since, presenting the family with an array of health and human services for which they may be eligible at the city, county, state and federal levels. To date, the Bartons, however, have not pursued any of these options while choosing to remain in the home.

I want to add that, during these site visits, staff – who are mandatory reporters – observed conditions inside the residence that required them to submit reports to Adult Protective Services.

This smacks of a flimsy attempt to undermine the Bartons' credibility with the public.

Because according to both Jean Barton and Jill Smith, the family's attorney, Adult Protective Services personnel did visit the home and carry out an inspection on Friday. They found no problems. If they had come across any serious danger posed to Byron, they would have removed him from the home, Jean says.

What about the notion that city staff have been "almost daily contact with the Bartons" and the Bartons "have not pursued" any of the options presented to them?

"The city of Seattle came with two people who had a list with a couple of things [resources] on it," she explained. One of the phone numbers on that list, which she dialed, was disconnected. "I had just talked to the VA [Veterans Affairs] social worker an hour before they were there...the VA person was much more helpful than the city of Seattle."

She says she's already filled out a lot of paperwork and may qualify for Section 8 Housing. "If I do qualify, it’ll be very minimal help because we’re just over the amount for what I make and what Byron gets on disability. We’re not quite poor enough."

I asked Megan Coppersmith, a mayoral spokesperson, why Ed Murray now seemed to be slamming the family publicly, after standing up to prevent—or at least delay—this disabled veteran's displacement. Several news outlets have already quoted the statement. Why did the mayor "want to add" that sentence about Adult Protective Services?

The mayor's office then sent me this follow-up message: "We won't elaborate—in fact, by law, cannot elaborate on the Barton statement. But it happened, and the Mayor felt it was an important detail to the story." I've asked for clarification about the legal restrictions and received none.

"I’m happy he told the Seattle police to stand down," Jean Barton says. "What I’m not happy with is that he’s said publicly that Byron is in an unsafe environment."

"I’m extremely stressed," she added. "I’m trying to work, taking care of my husband, check out all these resources. So how do you think I feel? I didn’t want to be out here having to justify everything that I do. I'm just trying to make it day to day."

"I'm very familiar with exactly what communications went on between the Bartons and the APS," Jill Smith, the family's lawyer told me. "And I don't think there's any basis for the mayor to be claiming there are any problems at the house whatsoever. Maybe he got wrong information. I don't know."

"I've worked all my life and I've served my country for four years," Byron Barton said the last time the authorities attempted to evict him. "I want to stay in my home," he told KIRO 7.

Triangle Properties and Adult Protective Services did not respond requests for comment.

UPDATE Friday, 11 a.m.: Coppersmith clarified last night that her "low blow" comment was not intended to convey the position of Mayor Murray or his office.