What I Learned at Bumbershoot 2014 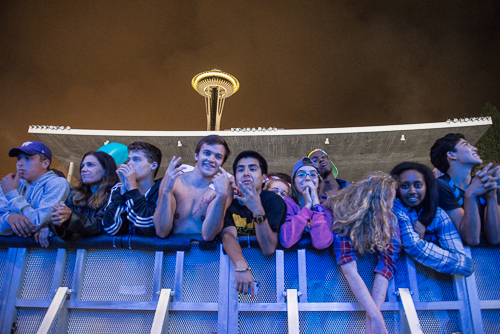 • Fuck the haters, rain boots DO look good with shorts.

• Anyone can have a booth at Bumbershoot. Even Bartell Drugs. And McDonald's. And it wouldn't be a Bumbershoot without the ability to buy SHEETS.

• Shishkaberry's are still the best thing at any Bumbershoot (even with the unfortunate apostrophe). The white chocolate one with sprinkles is the best and also the most impressive looking.

• The Mainstage this year was Memorial Stadium (instead of Key Arena). Memorial Stadium is good for: public weed smoking, making out on a blanket made of jackets, leaving your children to run wild into the legs of anyone in a 300-foot radius, a goth girl hula-hooping to the Replacements, dads patting their sons on the head during Elvis Costello, dads wishing they would have worn dorkier sunglasses, and dads wishing their sons liked Elvis Costello more.

• Speaking of shirts and dads, the Best Shirt of Bumbershoot Award goes to the 32-year-old wearing: COOL DAD AT HEART.

• While watching a Native American dance performance outside, you might be admiring the colorful feather headdresses when the first comment you overhear, seriously, is "I want one of those!" followed by (I am not joking): "This is cool. What country are they for?"

• "Am I gonna be this far back for Danny Brown? No, I'm gonna be up in the fucking mud!" —Horrible teen's reaction to the "we have a crush situation up here, everyone needs to take some steps back" warning from Danny Brown's stage security.

• If you find yourself accidentally too stoned to talk to the guy that may have crashed on your couch for a couple weeks a long time ago, but you're not sure because weed sometimes accentuates the prosopagnosia you feel you may have developed from said weed habit, you can always bolt to the “Bumbercade” exhibit and play video games indoors until the coast is clear.

• "No chick has ever looked at this shirt and known what it was." —Guy wearing pretty obvious patterned Wu-Tang shirt.

• "You're lucky it was you, I get pretty defensive about people grabbing my ass." —Girl in beer line, to an acquaintance that just grabbed her ass.