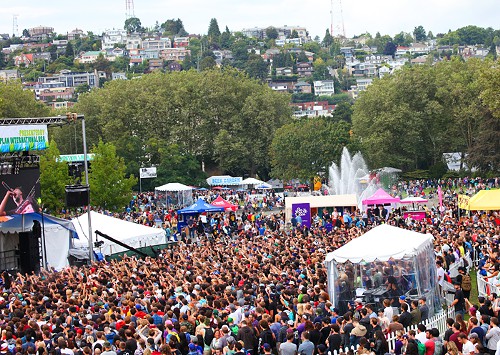 The Stranger spoke to One Reel executive director Jon Stone the day after Bumbershoot finished to find out how things went. He said he was “brain-dead and sleep-deprived.” We also found out what exactly goes on with the operation after the last note of the festival has decayed into silence.

The Stranger: How was attendance this year compared to the last few years?
Jon Stone: Won’t have hard figures till later in the week. [I'm still waiting to hear back from Stone about this.] Pre-sale tickets were tracking pretty much the same as 2013. Gate sales look to be on par with the last few years.

Did you get a general sense of the crowd this year, demographically speaking?
Anecdotally, the crowd this year was the ultimate crowd we’ve been striving to bring back. It’s literally a little bit of everybody. If we do our job right, the festival should be a reflection of Seattle. And I really saw that. Half the crowd is what you think is your typical festival crowd—18 to 30—but there were so many families with young children, teenagers. The 40/50/60 year olds were here in droves, and everybody was having a fantastic time. It’s an emotional thing for me. That’s the way I remember the festival when I first started coming as a kid. We kind of got away from that in the late ’90s and 2000s; it became more of a rock-festival crowd. We’re trying hard to make everybody understand that this is Seattle’s festival and there’s something for everyone here.

Were there any major snafus?
[laughs] There are major snafus every year. Did you hear of any?

Well, there was a minor scuffle at the Negativland show. I was way up front and didn’t hear about it till later, but there were a lot of young people in there expecting something vastly different from what they got. Maybe that contributed to a sense of frustration and some agitated feelings somehow led to a fight.
I didn’t hear about that. I was at Negativland for the first 15 minutes or so and then I had to run. I never expected to get to see Negativland, so it was awesome to be there. After the fact, I heard there were a lot of EDM-oriented youths who had some sort of idea in their minds about what Negativland’s all about and not getting it. I didn’t hear anything about altercations, though. We keep track of all the police and fire and medical activities throughout the festival, so those will be reviewed in the coming weeks. Sunday it seems like there were a couple of altercations that came to mind. I can’t remember the details; they probably centered around a beer garden. Any time you get large groups of people together, statistically, some things are going to happen. The goal is to be able to handle them as quickly and effectively as possible.

Were there any other major problems or did things generally go smoothly?
From our perspective, it’s always hard work and there are always snafus, technical problems behind the scenes, server crashes… I don’t know if there’s a year that goes by when that kind of stuff doesn’t happen. But overall, it was a pretty smooth festival.

On Saturday morning, it sprinkled a little bit. That’s problematic for us for a number of reasons. One, it causes people to think twice about coming to the festival. Bumbershoot is the only festival that gates the Seattle Center. Really, it’s the largest user of the Seattle Center. We put technology all over the place, like around the perimeter. We have to have ticket scanners and the ability to sell tickets and scan credit cards, security cameras they put up all over the place. To do that, we string a lot of Cat-5 cable. We do a lot of wi-fi stuff, but we always run cable, too, because you have to have that redundancy. We can’t afford for anything to go down very long. We use a lot of the existing Seattle Center copper for that, as well. Believe it or not, there’s still an awful lot of technical infrastructure that is actually World’s Fair vintage [1962]. There’s also a lot of state-of-the-art fiber-optic stuff that’s been upgraded over time, but the old stuff is still around. We have no choice but to tie in and use that stuff. The problem is when it rains, there are cuts in the cable or leaks in the pipes that nobody really knows where they are. And when it rains, it always kind of throws the electronics, the IP infrastructure, into a bit of a fit. Something shorting out somewhere, whatever. Murphy’s Law always prevails on this.

That's the festival model that the city mandated decades ago. The city used to fund Bumbershoot just like it does Folklife and others, but Bumbershoot is also prescribed by city ordinance to include top-tier talent, and the cost of that talent has risen dramatically over the decades. At some point the city didn't want to risk that kind of cash anymore so they said, “Thou shall fence the perimeter and sell admission tickets in lieu of city funding.” Or something like that.

Technical troubles always seem to pop up five minutes before the gates open on the first day of the festival. Either last year or two years ago, literally all of our scanning and field equipment crashed ten minutes before the gates opened. So we were late opening the gates. People had to stand out there an extra ten minutes. You hate that kind of stuff. We string something like 17 miles of Cat-5 cable all over the grounds, spend two weeks putting it in. You can test that stuff and test it and test it all week long, and it gives you nothing but a green light, but you can’t test it for 20,000 people trying to come in all at once. As soon as that load hits, things break. That kind of stuff is always going on behind the scenes. We just try to fix it as quick as we can and keep it all together for the weekend.

Other snafus? It was a pretty clean weekend. Wu-Tang Clan was really late getting to the venue. That’s problematic for a couple of reasons. It’s all about customer experience for us. Bumbershoot’s about sampling all sorts of different things. People like to come and see a few songs from an artist and move on to the next stage. When an act doesn’t go up on time, it can throw off people’s schedules. We hate it when that happens. Wu-Tang were the last act of the day on the Mainstage Saturday, and we have a sound curfew. The city of Seattle has a noise ordinance that we go to great lengths to abide by. They were a half hour late getting to the show. We were worried that they were going to try to run over curfew. But it wound up not happening, so it was all right. But it gets the adrenaline going, in the moment.

There are a lot of gears and cogs that make the whole machine work. It’s a constant maintain, repair, break, fix, maintain, repair… all weekend long. It’s a small team of us that do all of this. Our first priority is to break down the festival and get out of Seattle Center. Contractually, we need to clear everything out in three days. there are dozens of people out here, dog-tired, sleep-deprived, sore, out here busting their asses, packing all of this stuff up.