Two Mars Hill Church Branches in Seattle Are Closing: Churchgoers at the downtown and U-District branches were told the news during services yesterday. The downtown branch moved into that building in 2013. A church spokesman told the Seattle Times they've seen a "steep decline" in attendance and giving over the last two months, and will be forced to cut 30 to 40 percent of paid staff. A third branch in Phoenix, Arizona, is closing as well, and a fourth branch in Huntington Beach, California, is barely hanging on, but may close soon, too. "Some of this is our own sinning. Some of it is our own mistakes," the spokesman said. The downtown and U-District Mars Hill congregations will meet together at Mars Hill Ballard starting October 12.

Boeing Gets an $11 Billion Order from Dublin-Based Airliner Ryanair for 100 New Planes: With an option to buy 100 more, so the New York Times is reporting this as an "up to $22 billion" deal. The order came "after pushing the plane maker to develop a new version that squeezes in more seats." Ryanair had 82 million customers this year and expects to have 150 million by 2024.

New Bike Lane on Second Avenue: Opens today, finally. "A row of plastic bollards or parked cars separates bikes from other traffic... Until now, the bike lane has consisted of a couple stripes, between parked cars and moving cars." This is the road where cyclist Sher Kung was killed recently.

Destroying ISIS: Is going to take a while.

Port Angeles Driver Crashes into a Tree: And dies.

Youth Homelessness Is on the Rise in the US: And 40 percent of homeless youth are gay, lesbian, bisexual, or transgender. Here's a piece arguing we should stop spending so much on getting gay marriage passed and give these kids some help.

The Duke and Duchess of Cambridge: Are spawning again.

Baby Orca Whale: Spotted over the weekend in Puget Sound.

Andrew Sullivan went to Burning Man: "In the bowels of a throbbing, mobile homosexual sheep." 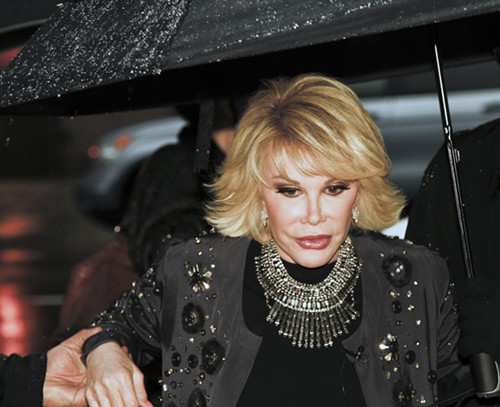 Joan Rivers Gets the Kind of Funeral I Would Die For: First of all, the New York Gay Men's Chorus sang "Hey, Big Spender" during the service. Then, "As the service ended around 12:30 p.m., a group of bagpipers and drummers from the New York Police Department marched down the center aisle playing 'New York, New York,' before pouring out onto Fifth Avenue, where they played 'Give My Regards to Broadway.'" (You can see video of the bagpipers leaving the service here; that's Judge Judy at the 2:50 mark and Alan Cumming at 4:03.) Also, Hugh Jackman sang a song from The Boy from Oz; here it is:

Apropos of Nothing: Here are the 100 worst white men, ranked.