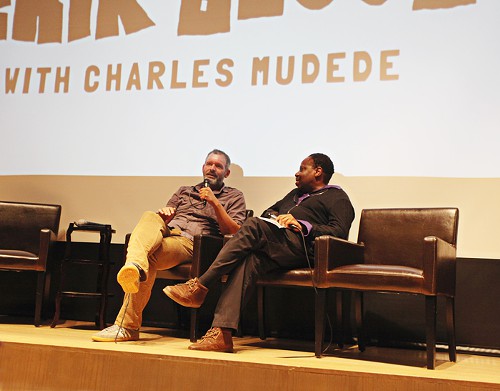 Erik Blood, man. He was the first Genius Award nominee to be interviewed at the Music Showcase at the Frye last night, and he blew the crowd away with his art, his story, and his insane personal grace. Charles Mudede did the honors, asking Blood to paint a portrait of his childhood in Tacoma as the son of a white father and a black mother. They listened to black music almost exclusively, he said—except for his dad: "I love my dad, but he had terrible records. I didn't want to hear Kenny Rogers"—until new wave arrived when his sister was a teenager. And then came hiphop, which "was all I was about for a little while."

Specifically, until he came out at age 15.

“When you're in hiphop culture and you come out in the early '90s," Blood said, "you kind of have to get out of hiphop culture. Luckily, Cocteau Twins and My Bloody Valentine were there. That changed my life.”

What's amazing about Blood is that he's a crack producer—for Shabazz Palaces and many others, and musicians love working with him—and he's also a songwriter. Growing up, he played piano, guitar, and had a four-track cassette recorder. He went to the Art Institute in Seattle to study sound production, where he "learned about really expensive things that I'll never have," he said. He learned to do it in a bedroom with one microphone; onstage at the Frye, he turned the mic over in his hands and looked at it. "I can make really good guitar sounds out of this mic," he said.

We heard two clips of Blood's work. One was the soundtrack he wrote for Steven Richter's short film Center of Gravity, shot in São Paulo. If you were in the audience and for some reason your sweetheart was not sitting next to you that night, this movie and song made you positively ache. What if he was already gone and you didn't know it?

"You make me wanna dance, and you make me sad," Mudede told Blood.

"All I'm doing is giving you what I hear," Blood said. "I'm giving you back the love letter that you're giving me."

Next up was the marvel of an art project that is Hollow Earth Radio, represented by founders Amber Kai Morgan and Garrett Kelly, who were also outrageously charming. (This does not always happen with Genius nominees, so please don't think I'm just throwing it around.) Hollow Earth started in part because Morgan wanted to expand an experiment she did for about a year with a "Sound Friend" she enlisted on Myspace. They'd call each other and just play a sound, no talking, no getting to know each other. They did this probably 40 times each over the course of the year. Morgan wanted to hook up other people with their own "Sound Friends," to give people a chance to circulate things that were amazing to someone but would never become popular. 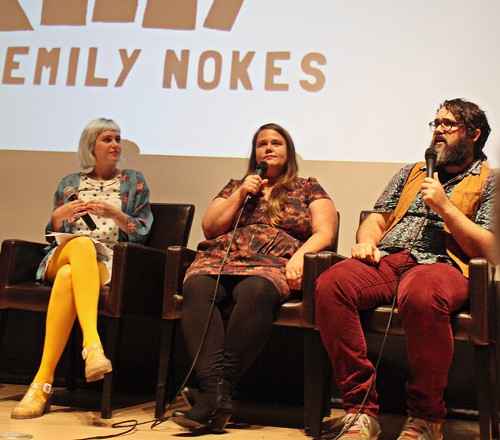 "We're all about strange human encounters," Kelly said, including: the conversations from answering machine tapes from thrift stores, a DJ recording the extraction of his own tooth, a man in prison DJing from the prison pay phone, and a happening that brought 17 bands and 50 performers to play on the light rail between the International District and Sea-Tac Airport one day. You should have seen the faces of the unsuspecting riders.

Hollow Earth Radio, to break it down, is a community-run (meaning all-volunteer-powered) online radio station that operates out of a space in the Central District. For nine years, they've produced the annual Magma Fest, which never books the same act twice, and seeks out completely oddball and underground musicians. Once, a 3-year-old drummer played. For another gig, Kelly googled "worst music video ever," and found the music of Jan Terri (here's some), which Kelly and Morgan adored, so they tracked her down over the course of several years and brought her to play in Seattle. Where the little crowd went bananas—we watched the footage at the Frye, and it was downright life-affirming (in a not-cloying-whatsoever way).

Hollow Earth is looking to get an actual spot on the dial. They've applied to the FCC for one of several spots coming available for Seattle concerns. THEY REALLY MUST GET IT. In the meantime, you really, really, really have to tune in. I had no idea of the greatness (I know, I am behind). 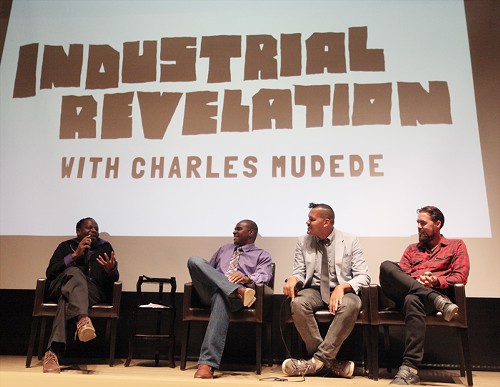 Good lord, Industrial Revelation is brilliant, both live and on recording. As Charles Mudede said, "If you haven't got a copy of Oak Head, I don't want to talk to you ever again."

Last night at the Frye, they didn't perform live but we heard two rich tracks, and D'Vonne Lewis (drums), Josh Rawlings (keyboards), and Ahamefule J. Oluo (trumpet) opened up about their history and what they're trying to do—just play like there's no tomorrow, even though they also are plainly very grounded in supporting each other, and also grounded in their deep knowledge of and intuition for improvisation that never loses its grip on the listener's heartbeat. (Evan Flory-Barnes, bassist, wasn't there.)

“We wanna make the highest music possible," Rawlings said. "We're in ecstasy when we play. Afterward, we're like, 'How the fuck did we do that?'”

Lewis's grandfather Dave Lewis was the first African American jazz player to gig with white musicians in Seattle in the 1950s and 1960s. All four of the players at one point studied or played with the legendary late Hadley Caliman, who taught at Cornish for a time.

Lewis met Oluo in high school. "Aham had a tone I'd never heard in a Seattle musician—an 'I don't care' attitude," he remembers. He came back together with Oluo, and met Barnes and Rawlings, just a few years later. Today, nobody's really in charge of the group. Mudede tried to ask about it and had to phrase it two ways to get it out. "Is it really democratic?" he started. Blank stares. "I really want to know who the fucking leader is," Mudede said. "When I listen, I want to know."

Each member brings a sketch for a song, then they all adapt it, Rawlings explained. In recordings, their goal is "making the thing that's perfect but not," retaining the core of the meaning of the word "recording" something that's actually an event, happening. "What do you want from an album?" Oluo said. "Refined ideas and simulated spontaneity."

Adorably, all three of the Genius nominees will present a joint show on October 4. Stay tuned.

Meanwhile, there's one Genius Showcase left at the Frye—for performance, next Wednesday night. Get your tickets now.

Here are our wrap-ups from Visual Art, Literature, and Film.

And don't forget to come to the actual Genius Awards and party—FREE THIS YEAR! (reserve a spot)—on Saturday, October 18, at the Moore. There, the winners will be announced. The one and only person in the entire world who knows the winners in advance is Stranger business manager Laurie Saito, who tallies the votes. We all get surprised together. Join us!