Mayor Murray Requested an Investigation Into Nickelsville's Relocation Plan. Why?

Mayor Ed Murray placed the future of Nickelsville in doubt by intervening and requesting that officials "investigate" the homeless encampment's proposed move from the Central District to Dearborn Street, records show—and at least one Seattle City Council member wants to know why.

The Department of Planning and Development now says it's "close to a yes" on providing Nickelsville with a temporary permit to move to their chosen location on Dearborn Street near Interstate 5—but that's a reversal from two weeks ago, when officials told me they were unlikely to give the camp the go-ahead on the move.

When I visited Nickelsville on Wednesday, the encampment was still without a home, after DPD stymied their plans to move with repeated requests for technical data. "DPD is not going to let us be on that site," said Richard Gilbert, a Nickelsville resident, standing at the camp's unauthorized, makeshift spot across from Seattle Goodwill and pointing down the street to where they want to move. "They just want to remove homeless people from the city of Seattle," he said.

On August 25, Nickelsville organizers e-mailed the Department of Planning and Development to tell them that a church was sponsoring and the landowner in question—Coho Real Estate—had approved the move onto its property.

But by the next day, the proposal was "being investigated/reviewed and considered at the request of the mayor's office," according to an email from Seattle Parks and Recreation Senior Property Agent MaryLou Whiteford to other city officials.

As Dominic reported, Murray has stepped up evictions of homeless people across the city and is opposed to encampments as a matter of policy.

A young man named Lee Varner, who said he wound up at Nickelsville after a man swindled him into selling much of his belongings, joked with other Nickelsville residents about renaming the camp Murrayville. "That would get his attention," Varner said, laughing. The camp is currently named after former Seattle mayor Greg Nickels. One of its goats, Sally Clark—named for the city council member who is dead set against homeless encampments—is currently off on a goat farm somewhere.

Officials working to end homelessness in King County say homeless encampments are a good thing. "We want an approach in our county that is inclusive of the strategy of encampments as part of our strategy for ending homelessness," says Mark Putnam, the Director of the Committee to End Homelessness in King County, which has recommended supporting them. Mayor Murray is currently the chair of organization's governing board. "The community fostered through the encampments which is supportive of each other, self-empowered," Putnam said, "is much better than living alone on the streets."

So why did the mayor decide to heap extra scrutiny onto Nickelsville, which faces suspicions and resistance every time it moves somewhere? Mayoral spokesperson Jason Kelly only referred me back to this statement, which was released on the mayor's website on the Friday evening before Labor Day weekend. (It's commonly known that if you want to announce something without anyone noticing, you put it out late on a Friday.)

The choice had an impact on Heather Dobson and Tatiyana Hampton, a couple who moved from Florida earlier this year, in part so that they could marry here. Dobson said she's worked in call centers all her life and had a position lined up when they drove out here with a tiny grey cat named Kasumi in tow. The job offer fell through and her car was towed, and they bounced around from place to place in Tacoma and Des Moines. Eventually, the man who was illegally subletting them his place was evicted. They had nowhere to go. A friend told them about Nickelsville. 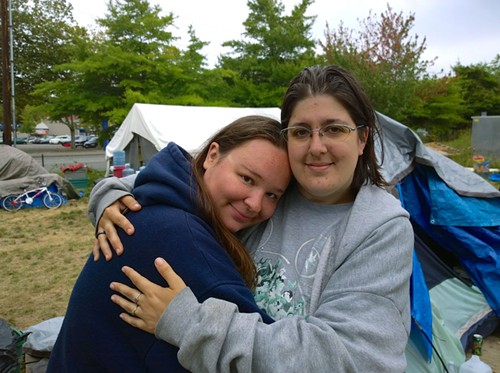 "When people find themselves in a horrible situation like us, it's so important. This place was really our saving grace," said Dobson, speaking in front of their Nickelsville camping tent. "I'd much rather be here than on the street. We were terrified. We'd never been homeless before," she said.

Asked about the wrangling around Nickelsville's relocation, she said, "I think there has been a lot of passing the buck."

The couple has an appointment with the Housing and Essential Needs program and expects to be out of Nickelsville in the next few weeks. But they plan to come back as supportive volunteers. Lately, however, downpours have repeatedly flooded their tent. Kasumi, the cat, poked her head out fitfully during our interview—afraid of the trucks and buses rumbling by on either side of the camp. Gilbert, another of the residents, told me that moving to a location of their choice would allow them to build more solid structures that don't leak, like this one, the only one of its kind at the current location.

"Either they need to follow what we passed, or we need to go back [to reconsider homeless encampment regulations]," Seattle City Council Member Nick Licata told me earlier this week. "I need to understand what the rationale is for intervening in this process."

Inquiring minds—or at least, those who recognize that places like Nickelsville are a vital stopgap solution for Seattle's growing homeless population—want to know.