Hosted by Stranger theater editor Brendan Kiley (who pushed through his sore-throat scratchiness to lead proceedings with wit and charm), Wednesday night's Performance showcase brought the final installment of Five Nights of Genius at the Frye, wherein the nominees for this year's Genius Awards are brought onstage to show their work and then talk about it. I fucking love these Genius showcases, even more than the crowning finale event itself, as showcases are devoted entirely to exploring how highly accomplished artists do what they do.

The Performance showcase was no exception, bringing three powerful theatrical entities—one director, one theater troupe, and one self-described 'gender performance artist'—to the stage, starting with....

Valerie Curtis-Newton is a Connecticut native, a University of Washington professor, and one of the most respected theater directors in Seattle. (Among her recent triumphs: productions of Arthur Miller's All My Sons and Alice Childress's Trouble in Mind at Intiman.) She's also an ace interviewee, as she proved onstage at the Frye, where she eloquently strove to "let you all into my head." Her first step on this endeavor: reading a Buzzfeed-esque listicle of "13 Things You May Not Know About Valerie Curtis-Newton," including her past experience as an insurance underwriter, her history of walking and talking in her sleep, and her love of golf, which, as she explained, allows her to do what she's always encouraging her actors to do: "Find the present moment and be present in it."

As Brendan put it on Wednesday night, Curtis-Newton has a reputation for being a "bomb thrower"—a term Curtis-Newton acknowledged with a smile then immediately set to clarifying. "I like to think I'm more of a conversation starter," she said, before explicating the diabolical process through which someone who points out a problem becomes synonymous with "the problem." For example, in over 20 years of working in Seattle, Curtis-Newton has been asked to direct "a not-Black play" only five times. But when she states this fact, the theater community typically doesn't strive to take responsibility for creating the world in which this problem exists, but rather equates Curtis-Newton with "the problem." It's a softer version of killing the messenger, and Curtis-Newton would really like it if there were more people delivering the message. "And they can't all be black people," Curtis-Newton notes.

About her work, Curtis-Newton spoke with an easy but hard-earned authority. "I'm a director. My job is to make all the stage work—acting, costuming, tech—land on the audience with maximum potency." Her forever goal: Making work that "connects people across all differences." She would also really, really like to direct a production of Alice Childress's 1966 play Wedding Band: A Love/Hate Story in Black and White, and the universe should immediately create the opportunity for her to do so. 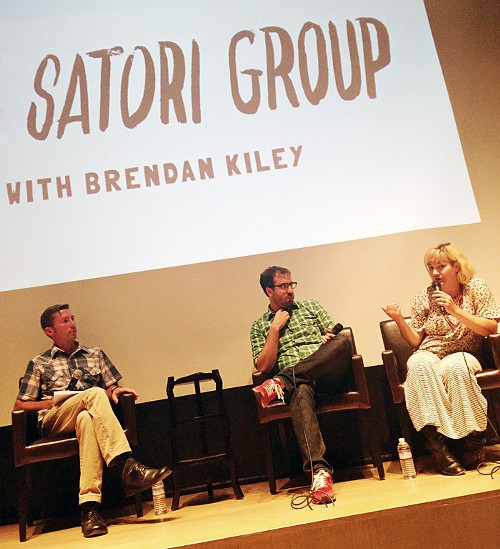 The Satori Group is, as Brendan Kiley put it, a "pack of performers, writers, and theater artists who moved to Seattle after graduating from various colleges east of the Mississippi," who sent out company members on reconnaissance missions across the country to find the troupe a new home. Seattle won the contest, the Satori Group relocated itself here in the spring of 2009, and has been making a name for itself with challenging and rewarding theater creations ever since.

Joining Brendan onstage were but two of the group's dozen-plus members: playwright Spike Friedman and company manager Clare Strasser, who screened video clips of a number of the Satori Group's works (the most impressive of which featured a huge-voiced woman singing her way out of bloody primordial ooze), then held forth on the group's creative process. Sometimes Satori Group builds shows around the words of others (texts by Will Eno and George Saunders have been given the Satori treatment), sometimes they commission plays from non-Satori playwrights, and sometimes they build whole worlds from the ground up themselves. Whatever the situation, Satori strives to give theatergoers something to make their journeys out of their homes and away from the million entertainments being beamed to their various screens worth the trip. Immersive experience is key, and as Friedman put it, Satori obsesses over "owning the theatrical experience from top to bottom."

Central to this ownership is a deep connection between performers and writers and the group's designers. "We train our actors how to talk to designers," said Strasser, with Friedman holding forth on the shared Satori vocabulary forged during the close work involving all members of a production team.

Despite the company's all-for-one/one-for-all structure, Satori Group has "no interest in becoming an institution," as Friedman put it, describing how the group recently became a 501c3 organization, but specified in writing the group's right to destroy the company at any time, without input from the board. But fret not about any premature pulling of the trigger—Satori Group's swimming in a handful of projects on track to hit stages over the next few years. 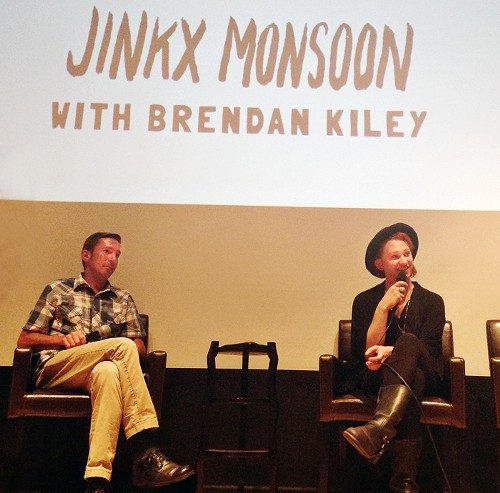 Jerick Hoffer is the creator and inhabitor of Jinkx Monsoon, the Seattle-based drag queen who dazzled America on season five of RuPaul's Drag Race, where she won the whole damn thing. But Jinkx is just one facet of Hoffer's talent. He's played Angel in Rent, Hedwig in Hedwig and the Angry Inch, and Velma Von Tussle in the musical of Hairspray. And on Wednesday night, before our very eyes, he summed up his whole theatrical self.

Things kicked off with Hoffer taking the stage to deliver a sweet, sharp mini-autobiography (born in Portland, put himself through Cornish College of the Arts, found his performer's soul in Seattle's experimental drag scene) that morphed into a monologue on the importance of drag, which Hoffer connected to Farenheit 451, in which books were kept alive through memorization and recitation. In a similar manner, "[d]rag queens keep icons alive for the next generation," Hoffer said, citing popular favorites (Barbra Streisand, Bette Midler, Cher) before addressing his own offbeat tastes in divas. "My secret gay icon is Joan Cusack," said Hoffer, praising Cusack's (admittedly titanic) performance in the film Addams Family Values, then launching into a live performance of "What About Debbie?," a track off Jinkx Monsoon's The Inevitable Album, in which the words of Joan Cusack's closing speech from AFV are set to gospel track. It killed.

Post-song, Hoffer sat down to answer questions. Among the highlights: discussion of how the style and values of drag are regional ("And Seattle is the right region for an experimental performance-art drag queen!"); a short overview of his time of Drag Race (and how his post-win performances of his musical The Vaudevillians has "tricked Drag Race fans into seeing some theater!"); and his dream to be allowed to play great female roles without irony (top of the list: Sweeney Todd's Mrs. Lovett.)

Huge thanks to all of the night's artists. See you all on Saturday, October 18 at the Moore for the music-drenched, liquor-lubricated, winner-revealing Genius Awards Ceremony and party.

And hey: Want to see the whole Performance Genius Showcase with your own eyes? Lookee here!