"Arresting Suspects Is a Team Sport": That's from a leaked SPD memo obtained by KUOW yesterday, from an East Precinct watch commander to East Precinct staff, telling officers they are expected to use force when necessary to protect their safety. It talks about troubling "trends" wherein officers are "hesitant to use force when force is clearly needed" because of a new use-of-force policy. But in the context of a current lawsuit from officers over that new policy and a big politicized debate, this seems like it could be as much a political document as a serious memo. We just don't know. Either way: A memo telling officers to use more force and calling arresting people a "sport" might not be a great publicity moment for the SPD, y'think?
Sponsored

Seattle's Hot New Helmet Dispensers at Bike-Share Stations: Will not actually be ready for the launch of our bike share, even though we're legally required to wear helmets to ride. The kiosks won't be available until at least February 2015, and in the meantime, the solution? Boxes full of helmets.

Speaking of Bikes and Sadness: Someone broke into nonprofit Bike Works last Saturday and stole a bunch of bikes that had been donated by the community and fixed up by neighborhood teens to hand out to underprivileged families. Then on Sunday, they did it again. Humanity, you get an F on that one. (Bike Works folks, y'all still get an A.)

Are You Getting Screwed Over at Sea-Tac Airport Right Now? A fire at an air-traffic-control center in Chicago that basically shut down the O'Hare and Midway airports is causing all sorts of problems, cancellations, and delays here. Don't worry, the rest of the country is totally screwed, too, if that makes you feel any better?

Our Very Own Glacier Peak Is "One of the Most Dangerous but Least Monitored Volcanoes in the Country": So says the Everett Herald, which reports that the US Geological Survey has "decided to keep a closer eye on" the enormous, dangerous volcano right in the backyard of a bunch of small towns. What a grand idea!

The UK Parliament Just Voted to Approve Air Strikes Against ISIL in Iraq: It was a seven-hour debate ending in a 524-43 vote. The BBC reported on it live as it happened over here.

A Second Straight Day of Bombing in Eastern Syria: The US and allies are trying to take out oil infrastructure that's funding ISIL.

New Social Media Site Ello Says You're Not the Product: But the Atlantic says there's basically no way that really works out. There are lots of ways customers become products, not just the Facebook model of selling all your data. “If Ello was serious about their 'manifesto' they'd be non-profit,” says Ian Aleksander Adams, some British IT/UXUI/internettery man. Kathleen Richards talked to Slog about Ello yesterday.

It's So Hard to Stop Looking at South Lake Union's New Fake Forest: Vulcan turned an alley into a forest with hot rocks for your butt and a fake tree canopy for your eyeballs. It doesn't quite keep out the rain, Jen Graves reports. No one else can stop looking, either—tons more pictures here. We're all gonna hurt our necks. 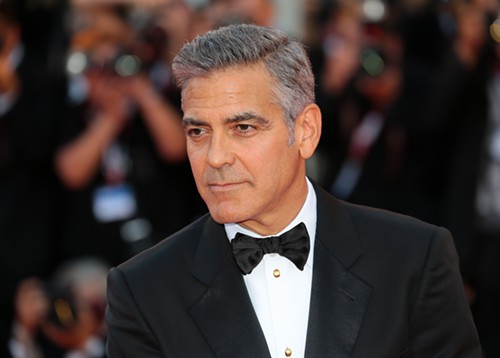 OHMYGODYOUGUYSOHMYGOD: GEORGE CLOONEY IS GETTING MARRIED!!!!!!!! "A-listers" are "flocking" to Venice! No, no—these people "descend." As you must realize, "the countdown is on, ladies"! Oooh, Clooney's fiancée was caught "strolling"! Close your legs and get out your Kleenex, straight women! Your lives are over now.
The Stranger depends on your continuing support to provide articles like this one. In return, we pledge our ongoing commitment to truthful, progressive journalism and serving our community. So if you’re able, please consider a small recurring contribution. Thank you—you are appreciated!
CONTRIBUTE NOW