Another legal weed store is (finally) about to open in Seattle. And this time, unlike SODO's Cannabis City, it's a ten minute bike ride away from The Stranger's offices! Plus, it's got everything. Uncle Ike's opens Tuesday at noon at 23rd and Union—2310 E. Union St—offering kush, edibles, cookies, trail mix, pre-rolls, two brands of vape pens, and a second storefront full of colorful pipes and bongs.

Will be there a huge line tomorrow, like on the opening day for pot stores around Washington?

"The truth is we have no idea," says owner and local business magnate Ian Karl Eisenberg. (The name Ike comes from his initials, he's a resident of the neighborhood, and he also owns the nearby building that holds The Neighbor Lady.)

Either way, he says he has enough supply to "stay open forever, I think." He wouldn't be specific about quantities for security reasons, and later clarified that he meant that among the whole product line, he expected to have at least one item in stock at any given time.

The main store is set back from street in a small building that looks like it's made from corrugated steel. Vintage posters from the 1968 film Mary Jane adorn the walls, menus flash on large monitors above the cashiers, and there's an ATM in the corner. Attention Congressman/professional concern troll Dave Reichert: Eisenberg says the state already made him set the cash machine so it doesn't work with welfare EBT cards.

Across the street at the historic barber shop Earl's Cuts and Styles, the barbers and patrons told me they welcomed the new pot shop on what some consider a "cursed" corner. "Get a little something, then get a haircut," said a barber named Stuart Reed. Three guys in Earl's said they hope, though, that Uncle Ike's hires some employees who are black and live in the Central District—and that so far, they hadn't seen any. 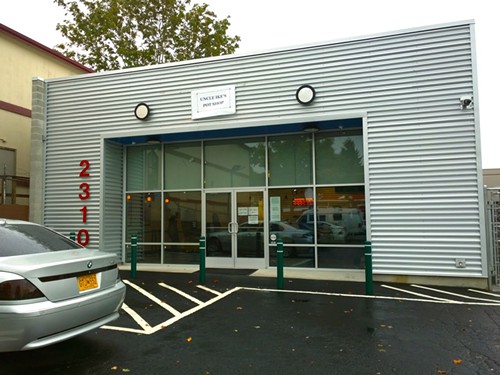 Uncle Ike's has about twenty employees at the moment, Eisenberg says, and he says he's hired "a couple" African-Americans.

As for the concerns from the guys down the street, Eisenberg responds with a more abstract question: Who is really local? "A lot of times, 'locals' means African American if it's a black guy saying that to you," he told me. "It depends who you're talking to... I could give the answer that everyone wants me to say, but that would be a bullshit answer. We're going to hire the best people we can hire from wherever they are."

That said, Eisenberg believes that businesses like his would generally want to hire people who live nearby because they're likely to be better employees.

"Everyone was talking about that today—does it gentrify the neighborhood? I guess any new business contributes to gentrification," he says. "Is this pushing out a local drug dealer? Well, I sure as hell hope so. That's the whole point of I-502. If that's considered gentrification, then the word's getting misused to the point of being asinine."