Shortly After 4:20 Yesterday, Ocean Greens on Aurora Got Its First Weed Delivery 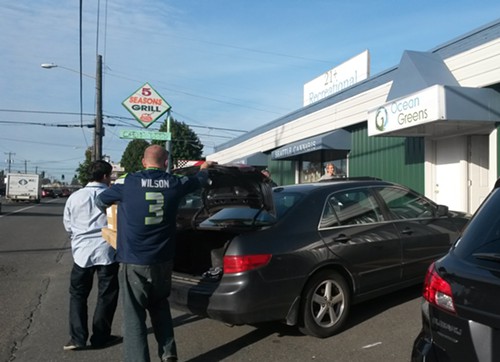 Nestled between Burgermaster and Quiring Monuments Custom Headstones is Seattle's third legal weed shop, Ocean Greens. I stopped by 9724 Aurora Avenue North yesterday at 4:20 p.m. to watch them make their first sales. It wasn't a prohibition-style street party or anything; the grand opening isn't until October 18. The first Ocean Greens customers I encountered were an elderly couple with paper cups of gas station coffee making their way to their car.

I was ID'd at the door by a guy who looked like security jobs weren’t hard for him to get. The owner, Oltion Hyseni, introduced himself. The pronunciation of “Oltion” is almost the same as “Ocean.” When asked if there were any products for sale he would consider favorites, he replied, with a laugh, “The ones containing marijuana.” I was a little early. The only THC-containing items for sale were Juju Joints, which are cigarette-sized disposable weed vaporizers. These were going quickly.

The gas fireplace and the employees chatting with a small, unhurried handful of customers gave the opening the atmosphere of a party in a living room—the living room of someone who happens to like paintings of naked ladies made of pot plants. Ocean Greens is in a former Thai restaurant, and there's a hardwood bar that's belonged to the space since the '60s. There were a variety of vintage lighters, including one shaped like a passenger plane. Hyseni is from Armenia, and before acquiring Ocean Greens, he worked primarily in real estate. He circulated the room, striking up conversations.

When a cheerful employee at the bar (bathed in neon green light) told me there would be flowers within an hour, I decided to stick around. I was in the parking lot when the car bearing weed arrived. A guy in Seahawks gear popped the trunk and the entire parking lot was awash in pot fragrance. I was surprised I didn’t get high from standing there. It took four people to carry the packed boxes into the store.

I met a guy who had just moved to Seattle from New England. I initially assumed he was really high or possibly just bored, until a brief interaction revealed he was in awe. A guy wearing Marvel superhero-print pajama pants and a Superman T-shirt was perusing the bongs with a woman in Hulk sneakers. When I told them I'd love to take their picture, the guy said, “I'd love that, too, but because of my job I'd better not.” I overheard more than one person murmur, “This is awesome.”

Chef Edouardo Jordan Delivers His Syrups, Mixes, and Stocks to Your Pantry