The Wrenchies Is a Comic Book That Doesn't Need a Story 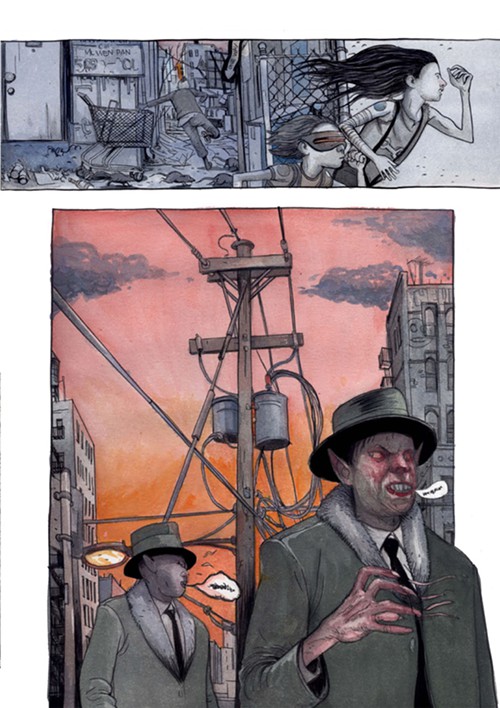 I've read The Wrenchies, the new graphic novel by Farel Dalrymple, and I don't know if I could begin to tell you what it's about. But I can tell you that I liked it. Wrenchies falls into a very small club for me: It's a high-concept comic book that's propelled forward not so much by its narrative as by its art. There are only a few other books that scratch this particular itch for me, and most of them are written and illustrated by Jack Kirby—OMAC, Kamandi, Mister Miracle. With Kirby's books, you didn't particularly care why the characters were doing whatever they were doing, you were just thrilled to be along for the ride. Most artists just aren't imaginative enough to get away with this kind of thing; Darymple has that kind of talent and then some.

Press materials indicate that The Wrenchies is about a pair of kids who go to the future to fight the evil shadowsmen alongside The Wrenchies, a group of super-powered teenagers. And that's in the book. The Wrenchies also exist as a comic book in the past. There's a dorky comic book fan in the book who dresses up like a superhero, and a giant robot, and maybe the best secret headquarters of all time (it features The Stellar Chamber, Theatre of the Upset, and The Hangar of Mostly Broken and Failed Things). There's a ghost in the story, and an eternally morphing line ripped out of "The Love Song of J. Alfred Prufrock." It's a dense, thick book smashed full of themes that keep bouncing back and careening off each other, and I'm not entirely convinced there's a coherent narrative here.

But it doesn't matter. Dalrymple's got to be one of the liveliest comics artists in the business today. His characters leap off the page. There are tiny little details scattered everywhere on the page that reward investigation—it's possible that The Wrenchies does, in fact, have a narrative and I just was too repeatedly gobsmacked by the art to stay on track with it. This is a book I'm going to dig into again and again, because it feels as though there's an entire world in there, waiting for me to see and to understand it. This kind of pleasure is something that only comics can deliver.