Wanna See Performances by Jinkx Monsoon, Erik Blood, Industrial Revelation, and the Seattle Rock Orchestra and Pay Zero Dollars to Do So?

Then by all means get your (free!) tickets to the Stranger Genius Awards, which will be landing at the Moore the evening of Saturday, October 18. Not only is it the biggest, funnest, artiest party of the year, it's the night The Stranger's field of 15 Genius finalists are whittled down to the year’s five winners, who’ll be announced live, feted onstage, and sent off with $5,000 each. 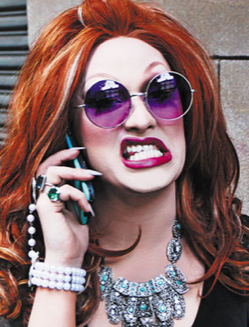 But that's just the tip of the Genius Night iceberg. The Seattle Rock Orchestra will be on hand to play orchestral versions of beloved pop hits, provide interstitial music, and inject the proceedings with old-school awards-ceremony glamour. Along with SRO, the Genius stage will also feature performances from four of the night's Genius finalists, including all three music finalists—producer/musician Erik Blood, boundary-bending jazz combo Industrial Revelation, and the visionary audiophiles of Hollow Earth Radio—and one performance finalist, the one and only Jinkx Monsoon!

And did I mention the whole thing is free? Reserve your $0 ticket here, rustle up your swankiest cocktail dress, shine your shoes, and see you at the Moore on October 18!

(And if you'd like to see the Genius performers perform before Genius Night: Erik Blood, Industrial Revelation, and Hollow Earth Radio's Garrett Kelly and Amber Kai Morgan are joining forces for a night of performances at Hollow Earth Radio at 9 p.m. tomorrow, and tonight Jinkx Monsoon creator Jerick Hoffer begins performances of his hit cabaret play The Vaudevillians at Seattle Repertory Theater.)