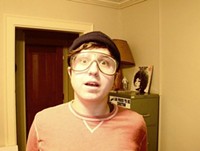 4
Ted Cruz is such an embarrassment to the GOP.

Net-neutrality does not go against the grain of conservative or libertarian principles.

5
Obama's plan to "save" the internet:

Step 1, appoint a cable industry lobbyist to head the FCC.

Step 2, wait until the Republicans have complete control of Congress.

Step 4, Internet saved!
Geocrackr on November 10, 2014 at 10:46 AM · Report this
6
Seems like this would be a useful club to beat the Republicans with if they are going to hand it to the Dems. I think there may be an overestimation about how much the public cares about this issue however. An electorate that has absolutely no idea what the difference is between climate and weather is not likely to have any idea what net neutrality means.
Rhizome on November 10, 2014 at 11:02 AM · Report this

7
Maybe it means 'Something most people support, unless it's called "Obamacare", since that's case with the A.C.A.....

There's this joke about the boy who's deathly afraid of kreplach....
Gerald Fnord on November 10, 2014 at 11:19 AM · Report this
8
Paul, you nailed it perfectly: Cruz is merely looking for money from the telecom industry and his paper-thin argument is piggybacking on the small-government/anti-government message of the Tea Party as well as the Libertarians. Fortunately most Americans realize Cruz is a representative of the far-right, the extremists, but in this case that doesn't matter because his message isn't for them, it's for big donors like Comcast and Century Link.

The only real danger in Cruz's statements is that they will be adopted by the only real contender in the race, Rand Paul and then they might get some traction from the corporate donor base. Cruz, however, will always remain an extremist who should be considered as dangerous to America as any right-wing fundamentalist is to the Middle East. He's our own internal terrorist.

@6 - You are correct. Most voters don't understand what the phrase net neutrality means, but considering that one third of registered Republicans still think that President Obama was born in Kenya I'd say they believe anything they are told. The more crazy the message, the more they will believe it as long as it denigrates our current President. Throw in a little "Jesus said ____" and they will lap it up.
Seatleblues on November 10, 2014 at 11:29 AM · Report this

For people celebrating Obama's statement. Why? (See Charlie Brown/Lucy Football)
CC-Rob on November 10, 2014 at 11:30 AM · Report this
10
Did you guys see the ST editorial against net neutrality on Sunday? They're apparently idiots.

Also, the internet should definitely be considered a utility.
Hanoumatoi on November 10, 2014 at 11:40 AM · Report this

11
The internet isn't pumped back and forth through pipes. It's done through a series of tubes.

Oh, and it's not a big truck you just dump stuff in either.

Serious. Fucking. Business.
Urgutha Forka on November 10, 2014 at 11:51 AM · Report this
12
A teabag candidate? Saying something utterly divorced from reality?

Tax Cuts are the Freedom Fries of the Economy.

Bombing Iraqi children is the No Child Left Behind of the War On Terror.

More Guns is the Star Wars of Three Strikes You're Out.

16
@14, don't forget, "Reagan's tough stance needs to be re-asserted against Putin." The right's new way to pump money to munitions manufacturers is to re-start the Cold War.
biffp on November 10, 2014 at 1:30 PM · Report this

18
My ears aren't as good as they used to be, but I think I heard a dog whistle in Cruz's twit.

The Internet is an information utility service. That was obvious in 1996, & is even more true now. Like electricity and clean water, equal access to information is critical to a democratic country, because INFORMED DEMOCRACY! Privatize this, and Authoritarianism kills another kitten, and laughs...

Do we have special, faster roads for "Higher Paying" citizens?
Q.E.D.

The ST editorial board has consistently been in favor of net neutrality. "Net neutrality is understood and valued."

on November 10, 2014 at 3:15 PM · Report this
23
@8, Jeb Bush in all likely hood will be your guy that all factions of the republican party will close ranks behind when he declares. The only candidate that will have the polish, the smarts, the arranged "math", and campaign mastermind Karl Rove in his corner to beat Hillary if anybody.
neo-realist on November 10, 2014 at 8:01 PM · Report this
24
I never realized the depth of Obama's cynicism until now, and I can't but admire the way he uses it. That sense of deja vu you may be feeling is the drubbing that North Carolina took in 2010 when they passed an amendment barring same sex marriage. The fucking day after was when Obama's "evolution" on the issue began. Now, a few days after the 2014 elections, he does the same thing with an issue that only techies and the under 30 crowd even realize is a major issue setting up a youth stampede to the polls in 2016 (assuming Hillary and the rest of the Democratic braintrust don't fuck it up).


There is now no way for a Republican to win the nomination in 2016 without opposing net neutrality.
usagi on November 10, 2014 at 9:20 PM · Report this
25
@23 - You are the second person I've heard today mention that Jeb Bush might be the next contender, instead of Paul Rand. That's not news I wanted to hear. No more Bushes, please. Two was more than enough.