5:36 PM: We have a couple more reactions to the speech from some of the folks who gathered at Casa Latina tonight to watch President Obama's speech. (Please note that quotes in this post do not reflect the opinions of Casa Latina as an organization; they're personal responses.) 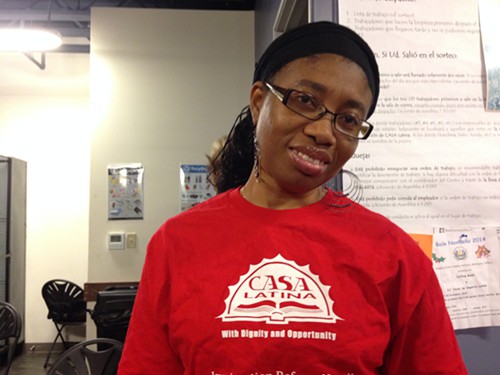 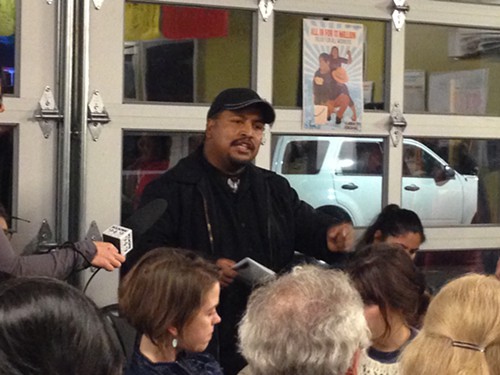 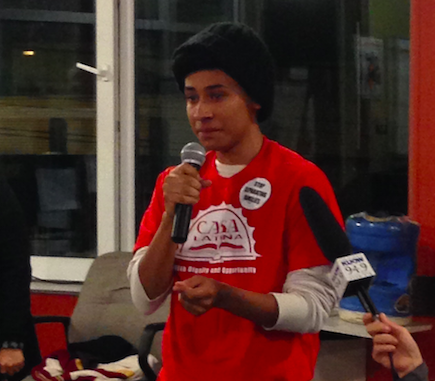 Another woman is in tears; even though she qualifies for Obama's immigration plans, she knows a lot of people who do not. They're still going to live in the shadows.

5:28 PM: President Obama did what he had to do here and, like most of his second-term speeches, he sounded a little disappointed that he had to do it. "Let’s be honest," he said, "tracking down, rounding up, and deporting millions of people isn’t realistic. Anyone who suggests otherwise isn’t being straight with you." It's almost as though you could see him blinking "DON'T LISTEN TO FOX NEWS" in Morse code. He railed against the current (for lack of a better word) system we have in America right now, with "millions of people who live here without paying their taxes or playing by the rules, while politicians use the issue to scare people and whip up votes at election time." The vast majority of the speech was made up of trying to pre-assuage racist white people, even though you can tell President Obama knows it's not going to work. But he still managed to whip up some of his old public speaking skills, building to a climactic proclamation that "to be an American is about something more than what we look like, or what our last names are, or how we worship." He appealed to "our shared commitment to an ideal—that all of us are created equal, and all of us have the chance to make of our lives what we will." I believe that President Obama believes his words. But I also believe he knows he's going to be shoveling Republican shit as soon as the sun comes up tomorrow.

5:15 PM: President Obama again has to make the case that immigrants are human beings. In 2014. He says they came here to work, to study, to fight in our military. "Are we a nation that kicks out a hopeful, striving immigrant," President Obama asks, "...or are we here to invite her in?" He quotes scripture, saying "we shall not oppress a stranger, for we know the heart of a stranger—we were strangers once, too."

5:12 PM: The crowd at Casa Latina is still listening intently, although some of the kids are a little impatient to have some fun. 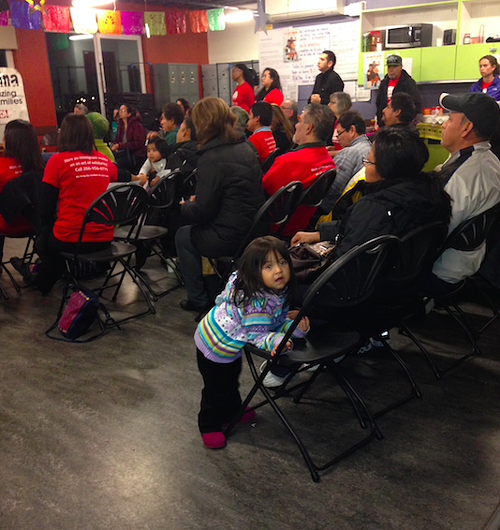 5:10 PM: "Congress certainly shouldn't shut the government down just because we disagree on this," Obama says. I can't believe he had to say that out loud, but there you go. Obama throws a sop to the "they took our jobs" crowd and says we can have a debate "without impugning each others' character."

5:08 PM: "This doesn't apply to anyone who's come to this country recently," Obama says. He says it applies to people who have been here for some time and who have ties with the community and are willing to pay their taxes, "come out of the shadows and get right with the law."

5:05 PM: First, Obama says, we'll reinforce the border. He'll make it "easier and faster" for more skilled immigrants to become Americans. He says it doesn't make sense to "round up" all these immigrants and "send 'em home." Then he quotes President Bush as saying "they are part of American life."

5:03 PM: President Obama says "we haven't done much" to help undocumented workers. "Overall," he says, the total number of people coming to America is going down. He says Congress refused a "commonsense" compromise that would "grow our economy and shrink our deficits."

4:59 PM: KC at Casa Latina says the crowd at there is, for the most part, "optimistic" about what Obama will say tonight, although "some people are talking about those who will NOT benefit and urging us to keep them in mind." Casa Latina program director Araceli Hernandez says "all of these standing men and women are here from 6:00 in the morning, working hard."

4:55 PM: The good folks over at Casa Latina (mission statement: "to empower Latino immigrants through educational and economic opportunities") are hosting a viewing party tonight. Looks like they're ready to roll:

4:50 PM If Ted Cruz is right, President Obama will declare himself monarch of America in about ten minutes. Exciting! You can watch Obama's speech right here:

We already know that what Obama will propose tonight will potentially protect more than four million undocumented immigrants from deportation. And conservatives are not happy about that. Twitter has already been home to promises that Latinos will be closely watching the Republican response to the speech online. Twitter has also been a sewer of conservative anti-Latino racism all day long. Based on ugly experience, this speech is probably not going to assuage Republican racism. In fact, tonight might be the beginning of the next great Republican government shutdown. And Speaker John Boehner just released a pre-address message accusing Obama of acting like an "emperor."

Let's watch Emperor King Monarch President Obama together, shall we?