No Charges Against Officer Darren Wilson in the Death of Mike Brown; Seattle Protesters in the Streets

If you're looking for up-to-date news from reporters on the ground in Ferguson, the Los Angeles Times is posting live updates (with some unfortunate auto-play ads running alongside the post). The New York Times has created an update page.

And if you prefer to get your information directly from live streaming video, Twitter user @AdrianChen has assembled a Twitter list of the most reliable live streamers in Ferguson. Chen also recommends streaming video site SMoKeeGyRL for Ferguson live streams.

We'll be following the protests and reactions here in Seattle.

6:03 pm: People waiting for the verdict at Westlake Park:

6:26: The grand jury has found that no probable cause exists to charge Officer Darren Wilson with any crime in the shooting death of Michael Brown.

6:33: Seattle mayor Ed Murray has opened the city's Emergency Operations Center. The center's director, Barb Graff, said in a statement: “Seattle has a reputation as a city where people express their beliefs and values publicly and safely. It’s our job to support people when they do this. We understand some demonstrations may happen organically and we will support these events as they happen.”

6:40: Protesters at Westlake Park are chanting, "Same story every time, being black is not a crime," and are lying down at the intersection of Fourth and Pine. 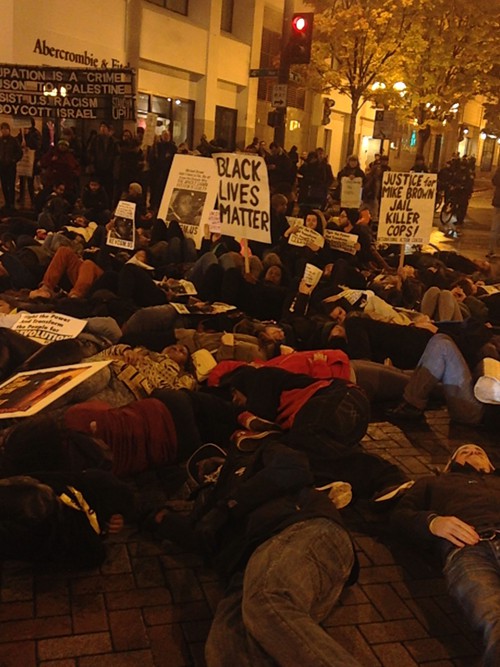 6:48: King County Executive Dow Constantine says in a statement: "We all mourn the loss of a young man's life. This is a moment to say what is in our hearts, with tolerance, respect, and restraint, as we were asked to do by Michael Brown's family."

6:50: President Obama will deliver a statement in about 10 minutes. 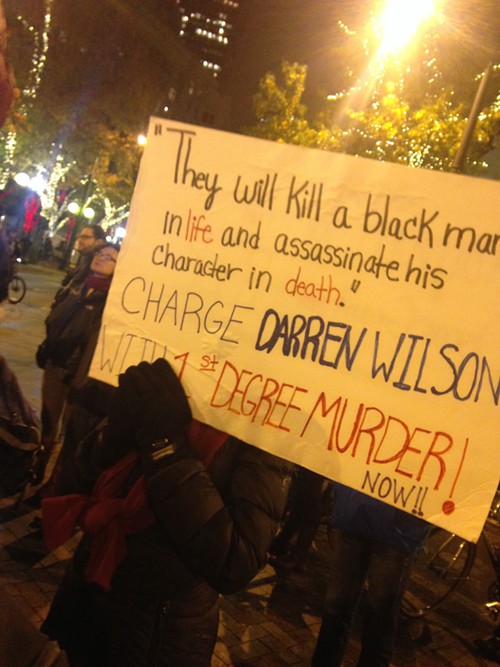 7:11: After appealing for calm, President Obama says: "The situation in Ferguson speaks to the broader challenges that we still face as a nation." He encouraged Americans to use this moment to address real problems in the relationship between many police departments and the communities they serve, and he encouraged people to listen to Mike Brown's family, who said in a statement: "We ask that you channel your frustration in ways that will make a positive change. We need to work together to fix the system that allowed this to happen." 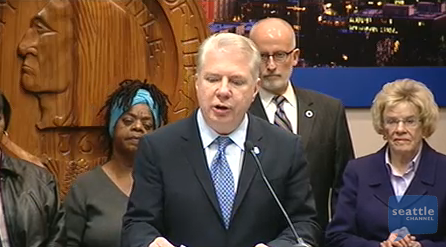 He stated flatly that "we are failing our young African American men," and he said to people upset by the grand jury's decision: "In this hour of pain, your city is absolutely committed to moving forward so that together we can bring a greater sense of justice."

8:01: Demonstrators are at the intersection of Pike and Broadway. There was a moment of silence for Mike Brown. There were chants of "Hands up, don't shoot." When a TV news reporter asks a demonstrator what he wanted, the demonstrator replied: "Revolution." 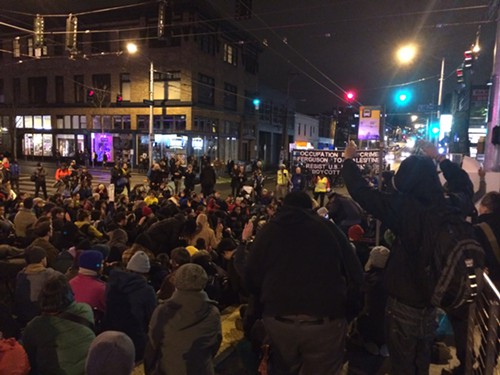 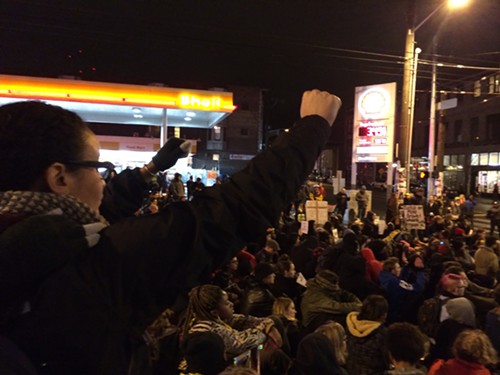 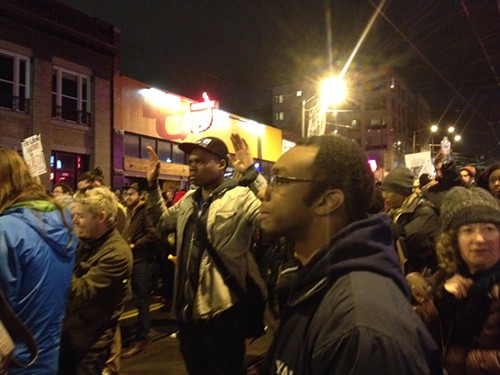 8:30 pm: Demonstrators disagreed on where to go next. "Fuck downtown," someone said. "Let's go to the CD." 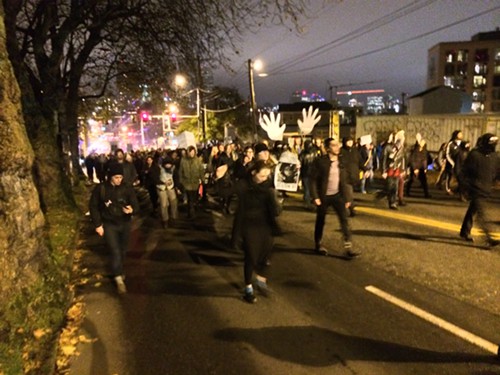 At one point, protesters massed briefly at the barricades of the SPD's East Precinct: 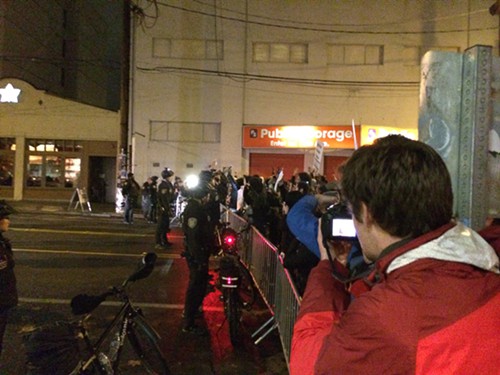 8:37 pm: At 23rd and Union, protesters kneeled down, saying: "I prayed for Mike Brown. He was kneeling on the ground." 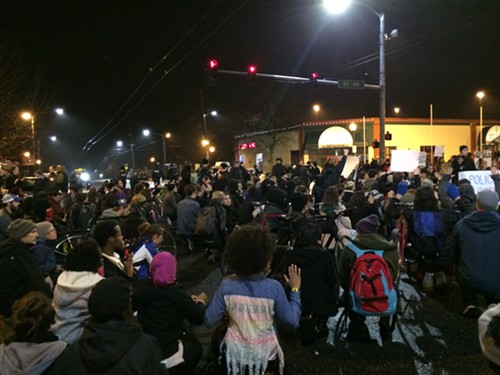 8:45 pm: The Seattle Emergency Operations Center has closed. Meanwhile, the march was just at 23rd and Union where this firework lit the sky: 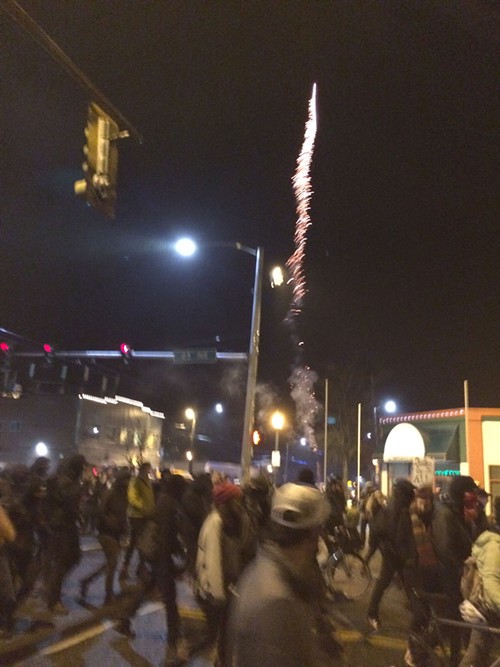 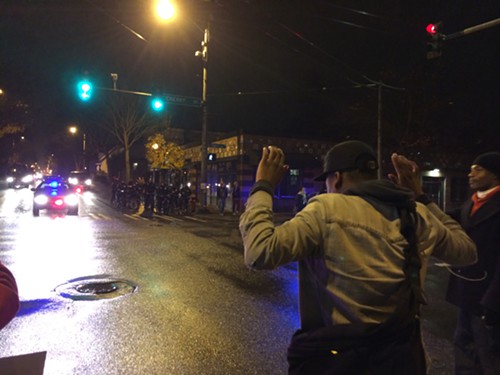 From somewhere in the crowd, a protester shouted: "Seattle, you know your hands aren't clean."

.@ElisaHahnK5 Correct. Peaceful gatherings. No arrests or other incidents to report at this time.
— Seattle Police Dept. (@SeattlePD) November 25, 2014

Cops pepper spraying protesters as they try to get on the on ramp approx 9:50 PM #Ferguson #Seattle pic.twitter.com/kKwRsTqf6U
— Bettina Hansen (@bettinahansen) November 25, 2014 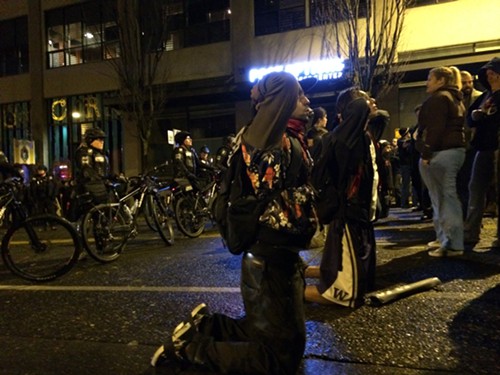 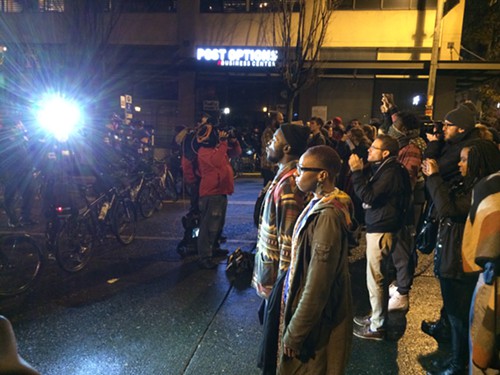 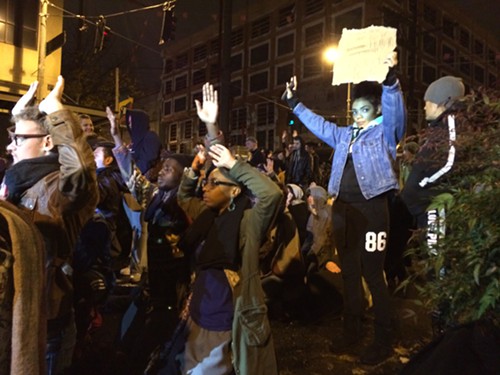 11:52 pm: Officers have backed away from the protesters at 12th and Pike. "It seems like they're doing everything they can to seem calm and reasonable," Brendan Kiley reports. 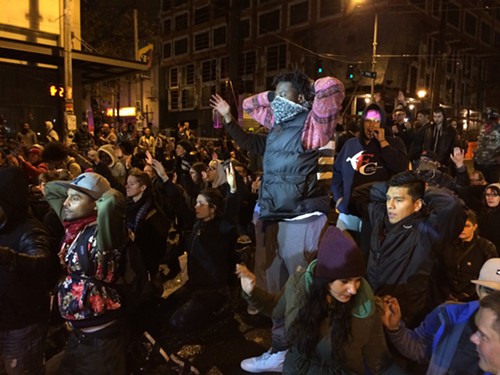 Ferguson: Why Announce the Grand Jury's Decision at 9 PM?