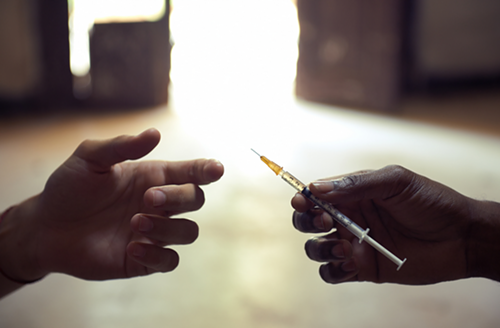 The United States poured a century's worth of hysteria and bad policy into ginning up the drug war. Disarming it is going to take a while, and there is no master plan to point to. But master plans are overrated. When dealing with a phenomenon as complex as this one, it probably makes the most sense to move forward where you can, then adjust tactics once you see what works and what doesn't.

Whenever progress is made on the popular front—the falling dominoes of states legalizing cannabis, for example—the question always comes up: What about harder drugs? We can't just legalize cocaine. We don't want kids buying heroin at 7/11. (Never mind that kids are already buying heroin at 7/11—in the parking lot out back.)

This step is just as important as the headline-grabbing mass legalization of marijuana. Maybe even more important.

Back in May, Vancouver-based doctors won an injunction to start prescribing heroin to around 120 "entrenched addicts" who had been part of a clinical trial to see whether getting clean, consistent, and regular doses of medical heroin would be less dangerous to themselves and others than continuing to score drugs through the black market.

The results of the study, published in the New England Journal of Medicine, showed that 95.2 percent of the research participants receiving heroin stuck with the program while only 54.1 of those taking methadone did.

Dr. Scott MacDonald, who was involved in the trial, has told reporters that bringing stability to the participants' lives gives them the opportunity to reconnect with their families and perhaps even begin building towards further educational or job opportunities.

"I think all the clinicians at the clinic have seen the great beneficial effect that this treatment can have on people — hard-to-reach populations that may have been using on the streets for 15, 20, 25, even 30 years," he told the CBC. "It is very dangerous and life-destroying to have to ingest in an alley, to use illicit heroin three, four times a day. That destroys lives. This is an alternative."

Vancouver has long been an epicenter of progressive thinking about drug policy and drug use. Dr. Martin Schechter, president of the School of Public Health at the University of British Columbia, has argued for years that the most destructive harms of heroin use don't come from the drug itself—they come from the fact that the drug is illegal.

To illustrate the point, he uses these slides (which he shared with me earlier this year) in lectures and panel discussions. The first slide lists the primary harms of heroin:

And the third slide lists the primary harms again, this time segregating them into columns:

It's a simplistic-looking exercise, but the point can't be made often enough—drug use can be risky, but drug prohibition is exponentially more dangerous.

And this is just the users we're talking about.

Why Is This Rogue Needle Exchange Handing Out Meth Pipes?

The People's Harm Reduction Alliance is one of the most daring and innovative needle exchanges in the country. And it's run by users. Five years ago, they started giving out crack stems. Now they're expanding services for methamphetamine users.