The Seattle Police Officers Guild (SPOG), has a rather nasty record on racial issues. Its internal newsletter had called opponents of racial profiling "the enemy" and has defended the right of cops to call citizens "bitch" and "n***a," and the union sued last year to block federally-decreed reforms of Seattle police.

But for a while, it seemed like Ron Smith, the new head of the city's largest police union, was trying to turn the page. Earlier this year, he opened up to Anna Minard, insisted that his union supports the reforms, and talked about the need for dialogue between citizens and police.

SPOG's Facebook page, however, hasn't exactly been a bastion of nuanced, progressive thinking on policing. As protests against police brutality and the non-indictment of Ferguson police officer Darren Wilson swelled last week in Seattle, an unsigned post went up on the SPOG Facebook page on Friday night that read: "Tough day downtown for ‪#‎SeattlesFinest‬ dealing with same old professional riot crew pretending to be legitimate protesters."

Dismissing all the protesters against racism and police violence as not "legitimate"? That's not a good look for a police union representing a force found to have engaged in a pattern of excessive force and racially-biased practices—as Smith quickly realized. But before the post was taken down, at least two Facebook users whose names matched those of active SPD officers liked the status.

Ahead of last night's Ferguson demonstration, I asked Smith why the post was deleted. A staff member posted it without permission, he said, and in any case, "I didn't like the generalization made of the 'same old riot crew.' There is a bright distinction between people exercising their rights and those agitators bent on violence." Smith said after the mishap, he adjusted administrator privileges on the account.

But yesterday, again, a SPOG Facebook post went up with a casual, lazy generalization about Ferguson demonstrations, seemingly in the same voice: "May St. Michael, the patron saint of law-enforcement keep Seattle's Finest safe tonight, during another round of protests/agitator circus." It's still up.

Then Smith took to the airwaves of KING 5 last night with a message that seemed calibrated to stir the fears of suburban shoppers coming downtown. "We saw the same people, the same troublemakers," he told the station, referring to last week's protests. "Even I think someone sitting home watching television, watching news coverage, you're going to see the same people."

What happened to the "bright distinction" that needed to be made between law-abiding dissenters and frequent-flying agitators?

Right-wing radio host Dori Monson piled on today with this bit of brilliant, critical analysis: "There is no way I would bring a family into downtown Seattle right now. The criminals have won. The gangs have won. The protesters are out of control."

Here is the one of the protesters from last night: 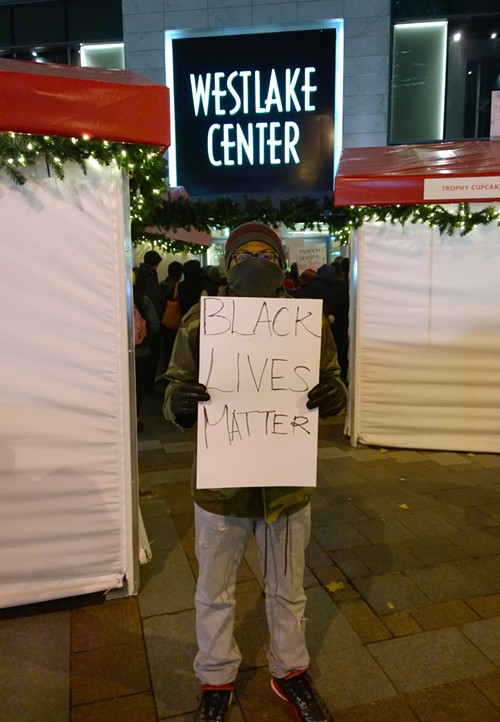 Why is this he wearing a bandana over his face? Is it because he was out to break windows, or to hide his identity from police?

"Because it's cold outside," he told me simply, in a way that hinted at another question: "Why the fuck are you asking me why I'm wearing a bandana on a freezing night in Seattle?"

His name is Koha. He's a spoken word artist, a student at Seattle University, and he just turned 20 years old. "I'm here," he said, "because I'm a young black male in America and I'd like to be able to walk down the street without being harassed or possibly killed, without repercussions or consequences, and no one having a problem with that."

There is both "whispered" and "institutional" racism at play, he said. "It shows, when he [Ferguson police officer Darren Wilson] wasn't [indicted], that this country doesn't value black life."

After the protesters got a few blocks away from Westlake, they were were blocked by lines of Seattle police in riot gear who prevented them turning back toward the mall. Eventually, the demonstrators dispersed in all directions and reconvened at Westlake Center. A 45-year-old cab driver named Abdinasser Omar stopped his cab in the middle of the street to join the protest and took the bullhorn, saying, "People need to come out and stop the system of bullets."

The crowd, including Omar, knelt down and held a moment of silence. As they stood back up, they chanted, "I pray for Mike Brown, he was kneeling on the ground." They passed around a yellow hat to collect donations for Omar, who was taking time off from his nightly shift. Warm hugs were exchanged, and he honked as he drove off, as the protest ended without incident.

Last night's protesters were, in large part, not troublemakers, and not just the same old crowd, either. But Smith's narrative—blending protest with criminality in the public mind—is insidious. It inhibits movements of people like Koha and Omar from gaining traction with an even wider swath of the citizenry, ironically reinforcing exactly the idea that Smith purported to repudiate: that these are the same protesters over and over again.

People have been protesting American police brutality for the better part of a century. Starr Temple, a young woman who had just gotten off work last night, voiced support for the crowd as she watched them march past her on Olive. She didn't seem to think they were a "circus" or an unruly group.

In fact, she said the heavy police presence seemed "a little absurd" to her.

"There comes a time when this"—and by "this," she said she means white privilege and police brutality—"needs to get addressed." It's also a chance for SPOG to set itself apart from other police unions and play a constructive role in that process. So far, the union seems to be missing it.