You Know What The Stranger Should've Suggested?

On the Boards's 30th birthday party. From our calendar:

Intermission Impossible: A Party Celebrating 30 Years of On the Boards
When: Fri, Feb 20, 8 pm
Price: $15

A big party for the theater that won a Stranger Genius Award a few years back. It begins with a 7 pm showing of the cult film Shredder Orpheus (with performances by Carlo Scandiuzzi, now the executive director of ACT Theater, and Steven Jesse Bernstein, now deceased), continues with a cabaret (starring Allen Johnson, Erin Jorgenson, Amy O'Neal, Pat Graney, Waxie Moon, Joe von Appen, Degenerate Art Ensemble, and others), and concludes with a big karaoke party.

That big karaoke party will probably look a lot like this: 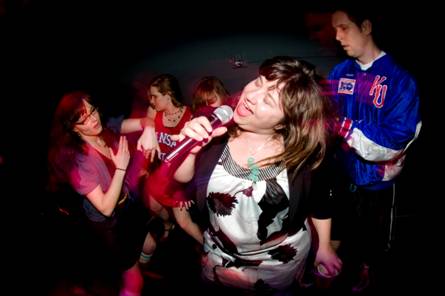 Tags: Theater Blogs
The Stranger depends on your continuing support to provide articles like this one. In return, we pledge our ongoing commitment to truthful, progressive journalism and serving our community. So if you’re able, please consider a small recurring contribution. Thank you—you are appreciated!
CONTRIBUTE NOW