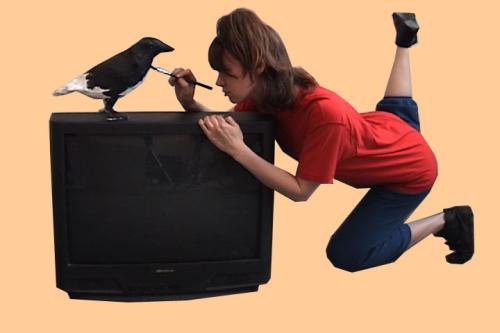 The event of this week and this coming weekend is definitely Wynne Greenwood's video-sculpture-performance Sister Taking Nap, which continues tonight through Sunday at 8 at On the Boards.

I still can't decide whether it's a strength or a weakness that the show left me wanting more—not more from it, but more of it. It was 30 minutes long. I could have watched Greenwood for an hour easy.

Greenwood, last year's Stranger Genius in Visual Art, is hilarious, deadly serious, inspiring, and insanely vulnerable. Her singing voice is painfully beautiful—and she only breaks into it only once in Sister Taking Nap, in an ecstatic three-part harmony with onstage collaborator Gina Young and a recorded version of herself. The tension between what's recorded and what's live is central here, as it was in Tracy + the Plastics (Greenwood's former video "band," which actually consisted of Greenwood live and two other characters, performed by Greenwood, beamed in on video).

The "story" of Sister Taking Nap is a straight-up allegory: a woman visits her sister to find her asleep on a mountain of pillows, no pens to be found for the poetry she once wrote. There are 10 kinds of jam—get it?—in the fridge. Greenwood takes advantage of the flat-footedness of her own puns to make the audience laugh; other times she is in a personal reverie, smiling to herself in the dark as Young shines a flashlight on her. Greenwood is the most lost, most found woman on earth. She's the dream the early feminists had, interdisciplinary, fearless, and fighting with love.

My one complaint: What's up with the plaster crow that gets painted black in the middle of the show? Who knows. I'm not for it. The rest of the symbols, meanwhile, have orbits and orbits of meaning.

Here's Wynne's interview with Artforum, including an audio snippet from the performance; a couple of thoughts on Seattlest; and Regina Hackett's take.

Comments 4
Tags: Theater Visual Art Blogs Arts
The Stranger depends on your continuing support to provide articles like this one. In return, we pledge our ongoing commitment to truthful, progressive journalism and serving our community. So if you’re able, please consider a small recurring contribution. Thank you—you are appreciated!
CONTRIBUTE NOW