You'd think the idea would sell itself: Four grants, $10,000 each, given to dance companies in New York, Philadelphia, Chicago, and Seattle based on audience votes during a weekend-long showcase/competition. Local dance geeks get a tour of new work by knowns and unknowns; dancers get publicity and money. Everybody wins. Right?

But The A.W.A.R.D. Show!, coming to On the Boards this weekend, has got people all riled up. (The acronym stands for “Artists With Audiences Responding to Dance”—a boring name for a controversial idea.)

The show, funded by Boeing, began in 2006 at the Joyce Theater in New York. It follows a basic reality-show template: 12 companies perform 15-minute dances over three nights. (A panel of artistic directors from all four cities collectively picked the contestants.) Each evening ends with a Q&A—moderated in Seattle by dancer/choreographer Tonya Lockyer—and a popular vote that graduates one company into the finals round. On the fourth night, the audience and a panel of dance experts choose the $10,000 winner. The runners-up get $1,000 each.

But dancers have voiced all kinds of oppositions to the format: it’s a beauty pageant, it’s a popularity contest, only the fluffiest and most crowd-pleasing pieces will win. Some purists insist that competition is for philistines. In Philadelphia, one company was accused of buying up all the tickets to rig the vote. (That company made it to the finals but didn’t win the grand prize.)

“It’s funny, in New York we don’t get that at all,” says Linda Shelton, executive director of the Joyce Theater, who will sit on the expert panel in all four cities this year. “The dancers are more in the spirit of it there, with a cozy, dressing-room kind of atmosphere. They cheer each other on. The arguments against it came up a little bit in Chicago and a little more in Philadelphia. I was surprised by it.”

(More about The A.W.A.R.D. Show and how Seattle dancers—Zoe Scofield, Amy O'Neal, KT Niehoff, Corrie Befort—feel about it below the jump.)

But the New York A.W.A.R.D. Show! hasn’t totally escaped controversy: It began at the Flea Theater as Dance Conversations with choreographer Neta Pulvermacher: all dance and Q&A, no cash. When the award component was introduced in 2006, Shelton says, “the Flea didn’t want to be part of it anymore. They didn’t like the idea of competition.”

Dancers here have been a little wary of the competitive aspect, too. Zoe Scofield, who did not apply says: “Some choreographers are pooh-poohing the structure of the show—a solid good/bad, yes/no judgment is irrelevant. It isn’t helpful or useful. But it’s also good to find new containers to present dance.” 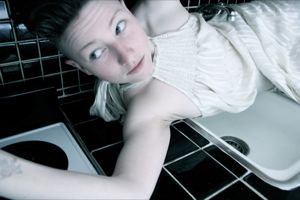 Amy O’Neal, who did not apply: “There is something equally humiliating and exhilarating about the whole thing. But if dance was more like a sporting event where people felt like they could invest more of themselves in a way that is familiar and collective, maybe more people would go see dance.”

Corrie Befort, whose well-respected company Salt Horse applied and didn’t make the cut: “I am profoundly grateful,” says Befort. “Everyone involved seems so stressed out about it and no-one is getting paid except whoever hits the jackpot and the runners-up.”

KT Niehoff, whose company Lingo did make the cut: “We're heading into a prime time TV format here (or the first-cousin version), about to blur the lines to a near fadeout. Helpful or harmful? The jury is out. But risk is good… better to do it and assess than not do it at all.”

I’m with KT. Not only is The A.W.A.R.D. Show! a worthwhile experiment, it’s not even that different from the daily competition of the dance world—it’s just starker, less sublimated, maybe less polite. Dancers are constantly struggling for the same grants, most of which are about achievement, geography, demographics, personal politics, or project proposals.

There is room in the world for one quick-fire, populist grant. Let The A.W.A.R.D. Show! begin.

Comments 15
Tags: Theater Blogs Dance
The Stranger depends on your continuing support to provide articles like this one. In return, we pledge our ongoing commitment to truthful, progressive journalism and serving our community. So if you’re able, please consider a small recurring contribution. Thank you—you are appreciated!
CONTRIBUTE NOW