Those Were the Days, My Friends 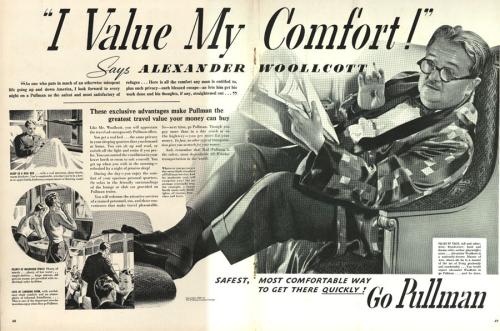 Remember when theater critics were so important they were paid to endorse trains?

Alexander Woollcott... was the inspiration for Sheridan Whiteside in the play The Man Who Came to Dinner.

Alexander Wollcott... was born in an 85-room house in New Jersey that had once been a commune.

Alexander Woollcott... contracted the mumps in his early twenties, "which apparently left him mostly, if not completely, impotent." (More like the man who couldn't come to dinner, amirite?*)

Alexander Woollcott... wrote the original "Shouts and Murmurs" column for The New Yorker.

Alexander Woollcott... had a heart attack while speaking on a radio panel about Adolf Hitler (the listening audience had no idea—they thought he just stopped talking) and died a few hours later.

*This joke brought to you by Eric Grandy.

Comments 7
Tags: Theater Blogs
The Stranger depends on your continuing support to provide articles like this one. In return, we pledge our ongoing commitment to truthful, progressive journalism and serving our community. So if you’re able, please consider a small recurring contribution. Thank you—you are appreciated!
CONTRIBUTE NOW