"The Journalistic Equivalent of a Flaming Bag of Dog Poop"

Is it significant that the author of the response, S&GS business manager Pamela Kelley Elend, discloses in the second paragraph that "as a black woman I am often confronted by issues of racism and sexism" before going on to defend the production and chastise columnist Sharon Pian Chan for using "the power, prestige and privilege of the press" recklessly?

It's an open question—and I don't feel 100 percent qualified to answer it in a binary, yes-or-no way. But have at it in the comments. Regardless, Chan is not the only person to have reacted poorly to this production. The blogger Angry Asian Man (aka Phil Yu) wrote: “Take a good, long look at the photo. Does any of that feel right to you?” 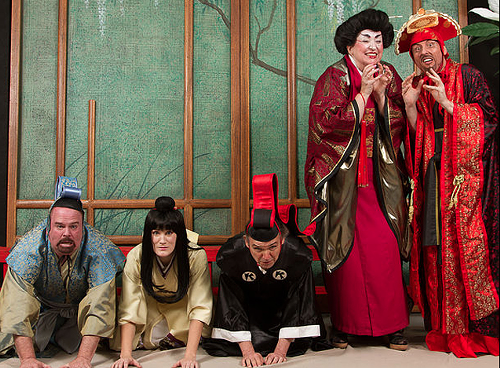 In her response to Chan, Elend argues that The Mikado is, in fact, racially charged—but that it's making fun of white people:

Is The Mikado an antiquated period piece best left to history’s dung heap? Is The Mikado on its face racist? Is it a stereotype laden, caricature driven, finger pointing farcical look at a racial group? Yes it is. It is a stereotype laden, caricature driven, finger pointing farcical satire of white people, and in particular the British Peerage of the 19th century. It is a poke at that august sector of Society, who had little to no understanding of Japanese society and culture, but held a superior belief that they did understand Japanese society and culture, and could not be bothered to learn otherwise.

No matter how you come down on this issue, there's no denying that this summer is seeing an unusually broad and public discussion about race and theater. Judging from the number of emails I've gotten about the Othello story from a few weeks back, this is a subject a lot of people have been wanting an excuse to talk about.

Comments 47
Tags: Theater Blogs
The Stranger depends on your continuing support to provide articles like this one. In return, we pledge our ongoing commitment to truthful, progressive journalism and serving our community. So if you’re able, please consider a small recurring contribution. Thank you—you are appreciated!
CONTRIBUTE NOW