Last Night's Polite But Necessary Discussion at the Seattle Rep About Race, Theater, and the Mikado Controversy

Last night, over 400 people crowded into the Seattle Repertory Theatre for a conversation that was billed as being about "artistic freedom versus artistic responsibility," but was really about theater and race in Seattle. It was a packed house, full of actors, playwrights, and arts administrators from all the larger theaters and many of the smaller and mid-sized across in the city.

They'd gathered because this summer, Seattle has seen an unusual number of high-profile public discussions about race and theater (unusual because the number typically hovers around zero), including one about an all-white production of Gilbert and Sullivan's The Mikado that went national after Seattle Times columnist Sharon Pian Chan called it "yellowface." (Chan's subsequent interview with KIRO talk-show host Dave Ross, who was in the production and got blustery and defensive about it, fed the fire.)

In the lobby before the discussion, Randy Engstrom from the Seattle Office of Arts and Culture—which helped organize the event, under the leadership of actor, director, and playwright Kathy Hsieh—said they'd expected 40 or 50 people to show up and had to change the venue at the last minute to accommodate the crowds. The Seattle Gilbert and Sullivan Society, he said, has produced The Mikado half a dozen times over the past decades and people have talked about diversity in the arts for at least 20 years. So what's different now?

"It's the time, more than the show," Engstrom said. "We're having national discussions about income inequality, disproportionality of discipline in schools, racial profiling by police, unarmed young black men being shot by white police officers..."

For all the heat of the surrounding issues, the two-hour conversation at the Rep was pretty polite—maybe a little too polite. As director Valerie Curtis-Newton, who was part of the onstage panel, said at the end of the discussion: "What makes this time different? Because we do this really well—a community event, everybody feels good about everybody else's opinion... but I'm a double Virgo, and I want to know what happens next."

Then she announced: "Because I'm not coming up here [for this kind of panel] again—I'm just not." (These quotes may not be 100 percent verbatim—I was taking rush notes—but they should be pretty close. A full list of the members of the on-stage panel is at the end of this post.)

As one theater-maker sitting nearby wrote in a note passed to me (referring to some raucous theater-community discussions called Shitstorm that I used to co-organize with a bunch of folks):

Regardless—the fact that the conversation even happened in such a large and diverse room was important, and some of the things people said were revelatory. As Jim Kelly of 4Culture said in the lobby, "I've never seen anything like this in my lifetime." These kinds of conversations happen among small groups of people, he said, but never in such a big, public room. 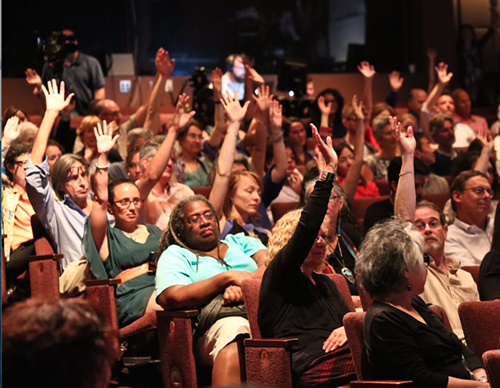 "I am told by some people that my work can be provocative," said John Feodorov, a Diné/Navajo artist and professor at Fairhaven/Western Washington University, who was on the panel with Hsieh and Curtis-Newton. Then he shrugged and deadpanned: "I still don't see it."

But he went on to list things he tries to do when faced with criticism that his work is offensive: "I don't act like I already know what the person is talking about, I don't get defensive or self-righteous, I don't stand by my right to freedom of expression no matter what, I don't congratulate myself on how provocative I am, and I don't discount the protest as overreaction or tyranny."

Hsieh talked about the preparation her company (SiS Productions) did for their show Ching Chong Chinaman, which they knew was going to draw serious heat, especially from Asian-American audiences, for the title alone—they thought about it, and thought about it seriously, every step of the way from program design to discussions with their box office staff about how to deal with angry walkouts. She said the company was resolutely unapologetic about doing the show (about a heavily assimilated Asian-American family that meets a new immigrant and commits just about every faux pas imaginable), but it was ready to have a discussion about it, including post-play talks after each performance—which 90 percent of their audiences stayed to participate in.

While it drew criticism, Hsieh said, Ching Chong Chinaman was the best-attended show in the company's history.

Making a serious choice to do controversial work, doing research about its potential consequences (including in-depth consultation with what Curtis-Newton called "cultural authenticators"), and being ready to respond calmly and intelligently to the blowback were themes for the evening.

"The cardinal sin for producers," Curtis-Newton said, "is to be caught unaware—if you're engaged with the community, you'll know when you're likely to piss them off." She talked about a production of the 1936 play Stevedore she directed in which the n-word was spoken 87 times. "I knew black people were not going to be happy," she said.

She started by asking herself if all 87 instances were necessary. Then she asked herself if she was going to cut one, why she'd cut any. Then she thought about her grandfather, who lived in the South in the 1930s, "and heard that word 87 times a day." That, she said, made her realize that people are just going to have to deal with it. So she did the play and went into post-play discussions "with my flak jacket on—I made the choice."

Despite the delicate tone of the evening, there were a few poignant moments of comedy and tension where people showed some flashes of emotion. One young activist from the Japanese American Citizens League, who went on at length about protesting the Seattle Gilbert and Sullivan Society's production of The Mikado, said she was exhausted after the first day but asked herself: "WWMLKJD? What Would Martin Luther King, Junior Do?" Then a grey-haired African-American woman sitting near me gasped and said "oh, don't you dare!"

Actor Bob Williams stood up in the audience and talked about how the Civil Rights Act was passed just around 50 years ago, effectively removing signs on drinking fountains that read "white" and "colored."

"But what if those signs said 'black' and 'bleached'?" he asked. A giggle rippled through the crowd. "You chuckled at 'bleached,' but nobody raised an eyebrow when I said 'colored,'" he said, and went on to argue that when "white" is seen as neutral, natural, and normal and everybody else is "other," that has serious consequences, including what happens in the theater community. "If a white [actor] is neutral, they can play anyone!" he said, while actors of color are typically only asked to play characters of color. "I'd love to play people on stage," he said, and gave credit to the quick-turn festival 14/48 for giving him the opportunity to play Elvis and Dick Cheney.

Pamala Mijatov of Annex Theatre added to this point, saying local playwright Courtney Meaker puts a note to directors in her scripts, reminding them that the default look of any of her characters need not be "able-bodied, slim caucasians."

In one particularly poignant moment, Mike Storie—who's been producing the Seattle Gilbert and Sullivan Society for almost two decades—stood up to speak, after much coaxing by Hsieh. An older gentleman with a white beard, he said he'd just returned from a summit of Gilbert and Sullivan societies from all over the country in San Francisco which had gathered specifically to discuss what happened with this year's Seattle production of The Mikado. They hadn't found any silver bullets, he said, but he was willing to admit that as a white man he'd been "sandbagged" by the controversy. "I acknowledge that there is a phenomenon called white's man privilege," he said. "It was rampant in Victorian times when [we] had the privilege of putting on blackface, going onstage," then to take off the makeup and "disappear. What we need to do is take works and get the context up to date."

The roof stiffened a little bit as he spoke, but several people afterwards commended him for being willing to show up, absorb what people had to say, and take what he'd heard back to his cohort.

There were a few soft groans and almost audible teeth-gritting as white arts administrators went around the room asking people of color what they should do to be more "inclusive." It was an awkward moment because while people talked a lot about feelings and casting choices, there hadn't been much real talk about the tough structural issues in theater—economics, education, employment, and why the leadership of our major arts institutions doesn't usually look like who's on the sidewalks outside.

Again, Curtis-Newton nailed it, saying she knows all too well what it's like to be "jobbed in" as the go-to person about race on a given project. "Because all I think about is race, right?" she said sarcastically. "I've been here as an out-of-school director for 20 years and I've only been asked to do the not-black play five times." She specifically credited Andrew Russell and Kate Whoriskey of Intiman for approaching her and asking "what do you want to do?" instead of "what black play do you want to do?" While Curtis-Newton has done great things with the work of Lorraine Hansberry and Alice Childress (most recently Trouble in Mind at last year's Intiman festival), she said last night—and has said in interviews—that she also wants to direct Albee and Shakespeare and Sondheim.

Fern Renville, managing director of Red Eagle Soaring Native Youth Theatre, added that if mainstream institutions want real, serious insight into what the issues are, they have to do the work. "Native people are generally happy to teach, happy to share," she said. But they receive disproportionately fewer dollars than mainstream (whiter) organizations, "so don't invite us downtown to find parking, take staff time, and visit your well-funded organization for a couple of hours... Take yourself to where Native people are and spend time with them."

For my part, I hope Curtis-Newton doesn't make good on her promise to never participate in a public discussion about race and theater again. While I thought last night's discussion was a little tentative, it was a necessary step forward—though it studiously avoided talking about how to change the demographics of the people running arts organizations when the education and training for such jobs is much more available to the racially and economically privileged in America.

I hope we collectively find a way to organize some more rigorous, maybe more harrowing, but ultimately useful conversations in the future. (Band-aids and salves are good for healing scratches; sometimes you have to re-break a limb to set it straight.) And I hope Curtis-Newton—and Feodorov and Renville and Hsieh and the rest of the gang, including people who were in the audience but didn't speak last night like director Tyrone Brown—are willing to join in.

Valerie Curtis-Newton, director and artistic director of The Hansberry Project

Comments 28
Tags: Theater Blogs
The Stranger depends on your continuing support to provide articles like this one. In return, we pledge our ongoing commitment to truthful, progressive journalism and serving our community. So if you’re able, please consider a small recurring contribution. Thank you—you are appreciated!
CONTRIBUTE NOW