A hit man, a gravedigger, a lawyer, a sheriff, a wrestler, a country vicar, a ghost, a New York police sergeant, an LA district attorney, and at least a dozen characters from Shakespeare.


Back in 2010, during the world's umpteenth production of Hamlet, actor Charles Leggett did something unprecedented. He was playing the ghost of Hamlet's father, that dourest of dour roles, and he extracted an astonished laugh from the audience with a single "O." He wasn't mugging or being at all hammy. He used a deadly earnest "O" in a way no one in the audience had ever heard it before. It was in the famous line "Amazement on thy mother sits: O, step between her and her fighting soul." Instead of delivering the "O" as it's always delivered, he glanced at the dead body of Polonius and spoke it as a mildly surprised but almost indifferent "Oh."

There are lots of "O"s in Shakespeare, and most actors use them as a running start toward whatever words will come next: O, I'm about to make an emphatic declaration! Not Leggett. With one carefully deployed syllable, he gave the ghost, his relationship to his closest adviser, and the world of Hamlet, a 400-year-old play, a whole new dimension.

Leggett has been working in this town for a long time—thank god. Whenever I open a theater program and see his name, it instantly sparks a sense of relief and hope. Whatever else might happen over the next few hours, you know you're in good hands with Leggett. Some critics praise actors by saying they inhabit a given role, as if they had picked out a second skin to wear for the evening. When it comes to Charles Leggett, the roles inhabit him. 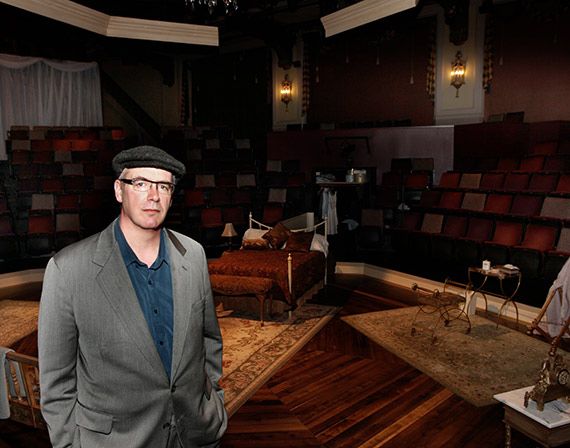 Maybe it's his intensely language-based approach to the work. Leggett doesn't sit down to memorize lines on flash cards. "I don't like to torture myself," he explains. Instead, he reads them aloud—slowly, attentively—dozens and dozens of times. "The reading distracts my conscious mind enough to allow my imagination to work," he says. "I don't like to tell my imagination 'go to work' or tell my memorization muscle 'go to work.' I just repeatedly wash myself in the text until those things start to happen." It's not memorizing so much as metabolizing.

Perhaps unsurprisingly, Leggett is also a poet—he has been nominated for two Pushcart Prizes—and during Intiman's 2008 production of A Streetcar Named Desire, he spent a significant chunk of the play sitting quietly upstage, writing verses about the play. You can hear his deep relationship with language in all of his characters; his voice has vibrancy unlike anyone else's. That quality might be rooted in an experience he had at Carnegie Mellon University in the 1980s. A big-name Israeli director had come to work with the students and was relentlessly hard on Leggett, who started to wonder what he was doing on stage at all. "What he was telling me," Leggett remembers, "is that there's a difference between making something sound realistic or unawkward and actually taking action—that I wasn't doing anything. You can't just make it sound good. You have to do something with your words. It's a way of meeting the language head-on and not evading what it is. I never forgot that."

Good actors, like good politicians, recite their lines convincingly. They draw us into a scene by making us believe that they believe what they're saying. On rare occasions, they may even fool us into believing that they're saying it for the first time. But when a great actor like Leggett speaks, something moves. The words aren't simply things of beauty, or little packets of communication, but an almost physical force with the power to transfigure both the audience's attention and the play itself.

Comments 1
Tags: Theater
The Stranger depends on your continuing support to provide articles like this one. In return, we pledge our ongoing commitment to truthful, progressive journalism and serving our community. So if you’re able, please consider a small recurring contribution. Thank you—you are appreciated!
CONTRIBUTE NOW