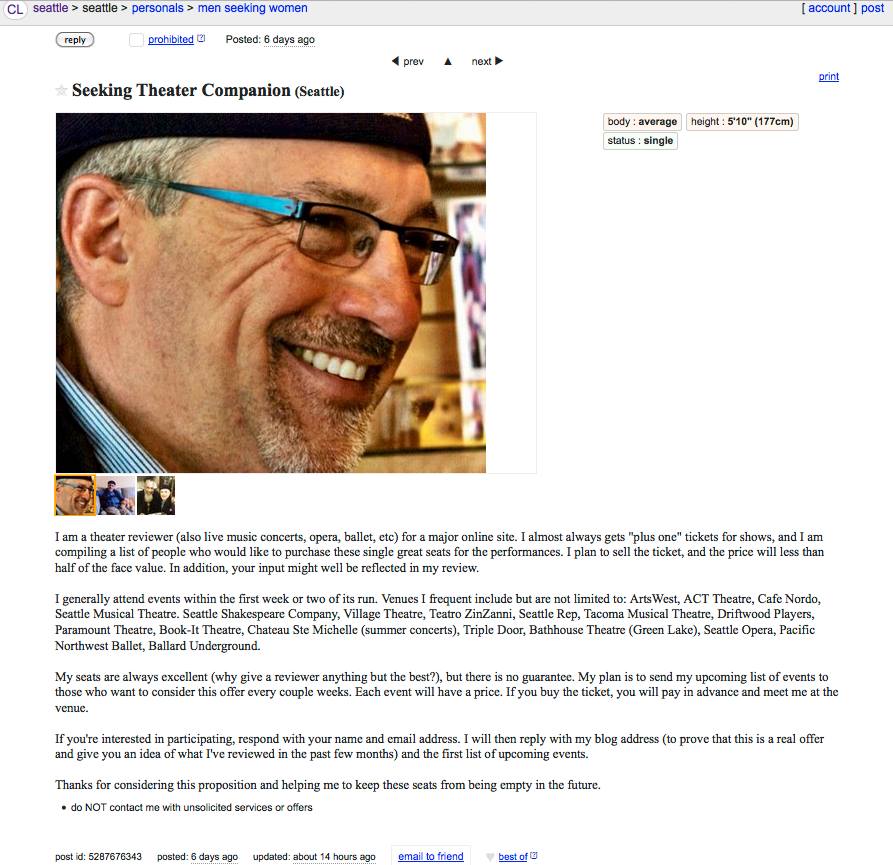 L. Steven Sieden reviews theater in Seattle and publishes his stuff on the Huffington Post. He's also a bit of a Buckminster Fuller scholar. And, yes, that's a backwards Kangol cap that he's wearing, made from the finest acrylic. Screenshot from Craigslist

Hey ladies, need a date to the theater? Then L. Steven Sieden is here for you.

Last week, the theater critic and Buckminster Fuller aficionado (meow) posted a personal ad on Craigslist under "Men Seeking Women." In the ad, he offers his "'plus one'" to ladies for "less than half of the face value" of the ticket.

If you accompany him for the evening, he says "your input might well be reflected" in his review. Sieden is clearly after your mind, ladies, your intelligence. He likes a big, healthy intelligence. One he can really get behind.

He wants you to know that his seats are "always excellent," and that he also does "live music concerts, opera, ballet, etc.," if you don't mess with straight plays. Oh yeah, and, in case you were wondering: Mr. Sieden is 100 percent single.

The ad was taken down today, but luckily we live in a world where our earnest romantic protestations and private enterprises can live forever in screenshots.

As you can tell from the ad, Sieden is selling his comped tickets because he genuinely loves the theater. He's not scamming theaters and profiting off of potential dates, he's just trying to put butts—nice ones if he can help it—in seats.

And what's so wrong with that? If he doesn't sell the ticket, then the seat beside him would be empty. No laughter, no tears, no emotional response to fuel the performances of the actors. Just an empty seat beside a beautiful, single man who likes to wear attractive hats.

Sure, he could just plan ahead and only request one comped ticket. Or he could e-mail the box office the day of the show and tell them that he doesn't have a plus one for the evening. Or, if he's swamped with work and can't get to his inbox, he could simply go to the show and leave his ticket for anyone who might need one, apologizing profusely for the faux pas and begging forgiveness. But you have to ask yourself: How does any of that help Sieden get laid?

I tried to contact Sieden, but he has yet to respond. Maybe you'll have better luck.