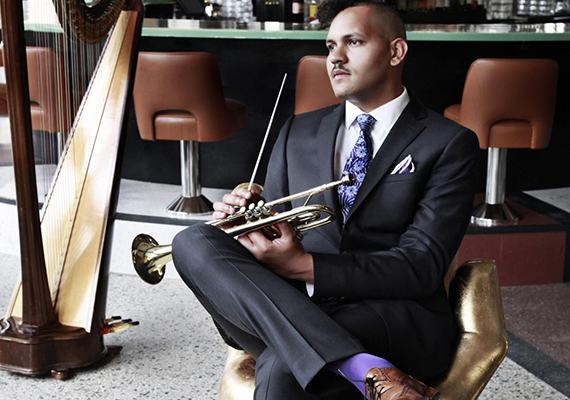 All the critics love u in New York Kelly O

You know that whole thing about how Seattle never pays attention to an artist till they make it big in New York? Well, we've been paying close attention to Ahamefule Oluo for quite a while, and as of today, it's safe to say that the big city has finally caught up.

The New York Times published what you could only call a rave review of the NY debut of Oluo's show Now I'm Fine, which premiered at On the Boards at the end of 2014.

Though this show’s title, “Now I’m Fine,” might promise a narrative out of the popular “It gets better” school of storytelling, Mr. Oluo refuses to traffic in false hopes. Being fine, he makes clear, is only a provisional state.

But when he conducts his band, his calm, carefully measured, sad-sack comic demeanor drops away. He bounces on the balls of his feet, and even occasionally jumps, just a little, into the air. Music provides the not inconsiderable consolation of at least temporarily defying gravity, in all senses of the word.

The show, which is being performed by its original group of brilliant Seattle musicians—including vocalist okanomodé SoulChilde, and Oluo's Industrial Revelation bandmates Evan Flory-Barnes and D'Vonne Lewis [CORRECTION: Dawn Clement is filling in for Josh Rawlings] —as part of the Public Theater's Under the Radar Festival through this weekend, and returns to Seattle on April 2 at the Moore Theatre. I'd buy tickets now if I were you.

It doesn't take a soothsayer to predict that there won't be many more occasions when a write-up of Oluo will involve the words "under the radar."

Sincere congratulations to the entire crew, and here's hoping you all march down Broadway on a team of stallions through a blizzard of ticker tape before you come home.

Tags: Theater Music Blogs
The Stranger depends on your continuing support to provide articles like this one. In return, we pledge our ongoing commitment to truthful, progressive journalism and serving our community. So if you’re able, please consider a small recurring contribution. Thank you—you are appreciated!
CONTRIBUTE NOW