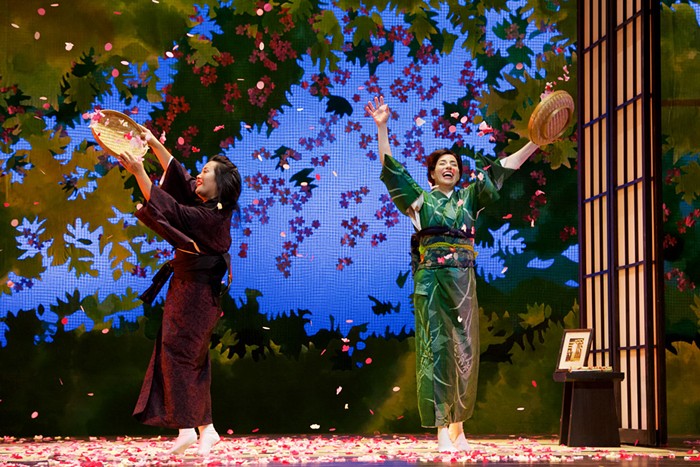 Great art keeps saying new stuff forever. It says what it meant when it was made and it says what it means when you see it now. I'm thinking about this because of how Madame Butterfly, which I saw twice over the weekend at Seattle Opera, still says even more.

The opera tells the story of an American man who buys a young Japanese girl for sex, etc., and the terrible things that happen. The week before I went to see Madame Butterfly, the Seattle Times published "Busted," a story about a prostitution ring based in Bellevue for American men who pay to have sex with young Korean girls.

Giacomo Puccini's opera debuted in 1904, 50 years after Commodore Perry's black ships arrived in Japan to open trade between the East and West. When the Yankees settled in, the shogun ordered a teenage geisha named Okichi to leave her fiancé and become the housekeeper and temporary wife of Townsend Harris, America's first consul to Japan. After Harris returned to America, Okichi was left and, according to some sources, committed suicide. Today there is a statue of Okichi in Shimoda, and her biography echoes in the zillions of late-19th-century stories of Pierre Loti, David Belasco, John Luther Long, etc., that preceded Puccini's opera.

Madame Butterfly is problematic because it's about buying a 15-year-old for sex, and because it portrays an Asian female as childlike ("a little toy" her temporary husband calls her), and because the whole culture—Japanese and American—seems to go along with it all. The 15-year-old Butterfly/Cio-Cio-San's poverty-stricken family is overjoyed that she gets to marry a rich American; after all, the rich get richer and get away with it, the poor get poorer and die. This story is troubling in terms of politics, race, feminism, and just plain worldview.

But oh my God—the music!

How can an American opera company with 21st-century values present Puccini's magnificent music without further contributing to the demeaning stereotype of the passive Asian female and making it seem okay to buy 15-year-olds? The whole system is gross. As staged, the girl is vetted by marriage broker Goro (tenor Rodell Rosel, who is always slimily great in these sorts of caricature roles). As Goro takes Pinkerton (tenor Dominick Chenes, who stepped in for Alexey Dolgov halfway through opening night when Dolgov had to bow out at intermission) through his new home in which the screen walls can be shifted easily, he assures the American that nothing needs to be permanent.

"Temporary wives" were common in some Japanese ports, an arrangement whereby a female would be housekeeper, sex partner, etc., for a time and then move on when her sailor sailed. But a problem occurred when the idea of a convenient, short-term partnership collided with a desire for a lifelong romantic love alliance. When Pinkterton is introduced to his poetically named staff of servants ("Rising Sun," "Delicate Cloud," "Perfume"), he dismisses them as "1, 2, and 3," and here you have it: the delicate beauty the locals present to Pinkerton versus his view of life as quick, efficient, all-business. Madame Butterfly, aka Cio-Cio-San, is an earnest romantic and a lover of beauty.

The sets are gorgeous—Kabuki meets Miyazaki. The music is deservedly beloved—soaring melodies, rich and complex orchestrations, and gongs!

Definitely try to hear University of Washington professor Judy Tsou's pre-opera talk. When I saw it, Tsou played excerpts of traditional Japanese and Chinese folk melodies, and then passages in Madame Butterfly where Puccini adapted them. She also made the case that Cio-Cio-San, as her music morphs from Eastern to Western modes, is "the most sonically nuanced character" in the opera. Plus, Tsou is hilarious.

Lianna Haroutounian makes a magnificent Seattle Opera debut as Cio-Cio-San; I hope to see lots more of her. (In other performances, Yasko Sato makes her US debut, having sung Cio-Cio-San in her native Japan and in Europe more than 100 times.) The always moving baritone Weston Hurt returns to the company as Sharpless; he gets my vote for the second most nuanced vocals.

It's hard to think about Madame Butterfly. You want to be politically aware, but also maybe you want to shut your eyes and forget the words and have the music of the East and West wash over you in the weird strange hybrid harmony where everything is distinct and itself but also together and blended that Puccini, somehow like God on a good day, makes happen. You want to imagine a world where we're like that.

Comments 8
Tags: Theater
The Stranger depends on your continuing support to provide articles like this one. In return, we pledge our ongoing commitment to truthful, progressive journalism and serving our community. So if you’re able, please consider a small recurring contribution. Thank you—you are appreciated!
CONTRIBUTE NOW