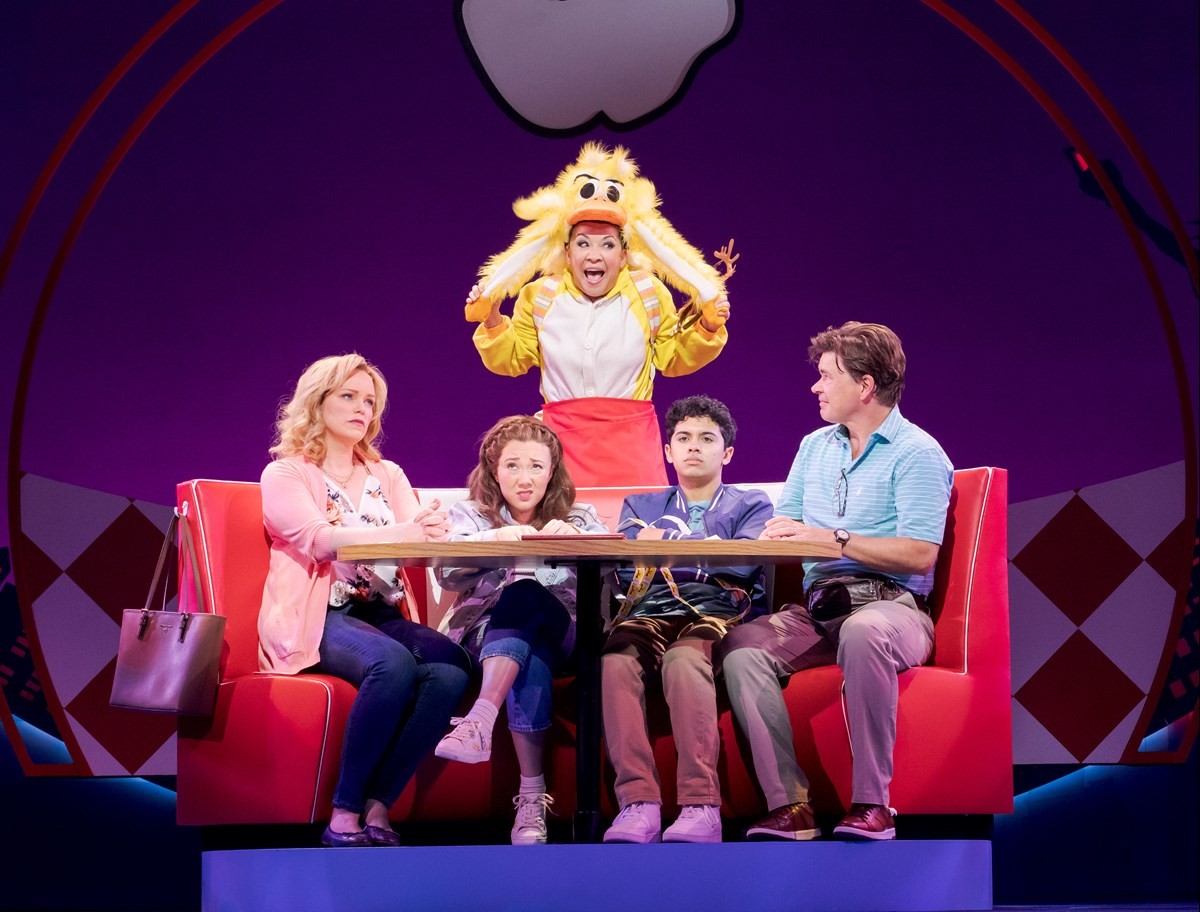 Early in act 2 of The Griswolds’ Broadway Vacation, a new musical playing at the 5th Avenue Theatre, I found myself wondering, “Who is this show for?” Then, one of the characters made a crack about millennials being entitled and expecting participation trophies and the audience laughed in boomer and my question was answered.

I suppose it’s not really such a mystery—who else but retirees would remember the Griswolds? The characters were created by John Hughes for a magazine story in 1979 and brought to life by Chevy Chase et al. in films over the ensuing years. In this installment, the family has arrived in New York to see a Broadway show, shepherd their daughter on college tours, and gawk nervously at tall buildings.

There are easy jokes about how expensive everything is, how hard it is to find parking, and how weird the locals are. There’s also a reference to Lady Gaga’s meat dress. Yes, really, a meat dress joke in the year of our lord 2022. That’s not just low-hanging fruit, it’s completely decomposed.

So who’s it for? The show seems to have been created in a laboratory to be as relatable as possible to real-life tourists from the sticks. Like many laboratory creations, it runs the risk of sterile blandness, but fortunately, this musical has two things working in its favor: A talented, funny ensemble that is able to create comedy far surpassing the material on the page, and a handful of moments that are utterly and enjoyably deranged.

Let’s get the plot details out of the way as quickly as possible because they don’t particularly matter. Idiot-dad Clark has brought his hot-mom wife Ellen and impatient teenagers Rusty and Audrey on a vacation to New York. Ellen is desperate to see the hottest show on Broadway, Wilson. You may think that's a parody of Hamilton—haha, a hip-hop musical about Woodrow Wilson—but no. It’s a musical about the volleyball in the Tom Hanks movie Castaway. So maybe this is a parody of Broadway shows that nonsensically tomb-raid corpses found in the back-catalogs of movie studios? (Incidentally, The Griswolds’ Broadway Vacation is produced by special arrangement with Warner Bros. Theatre Ventures.)

Anyway, as Clark struggles to obtain tickets to the show, we learn that he’s lost his job but hasn’t told the family. Ellen encounters a friend from high school who is interested in rekindling an old romance. Audrey chases New York coolness in the hopes that any of it might rub off on her. Rusty obliviously wanders into one catastrophe after another, narrowly avoiding disaster each time. (Was his storyline originally going to be a musical version of Baby’s Day Out?)

There are distant echoes of nostalgia for the original films: There’s a momentary cameo by the Griswolds’ hideous car; a tossed-off reference to knocking over Stonehenge; occasional reflections of familiar plot beats like a temptation to infidelity (pleasantly, it’s Ellen tempted to cheat instead of Clark). Notably, the show does not bear any National Lampoon branding, which is probably for the best as National Lampoon is now one of those intellectual-property zombie companies, currently dabbling in NFTs, and there but for the grace of God go we.

The strongest signifier of the original films, the pop song Holiday Road, only exists as a brief haunting hook at the start and the end of the show. The familiar "whoa-oh-oh"s condense into the score and then evaporate so quickly it feels like a mirage, and alas, that was the piece of music that I was humming as I left the theater. The original music is fine, very nice and beautifully sung, but all boiler-plate new-musical style with no toe-tapping standouts. In fact, most of the show is fine, enjoyable, not boring but also not memorable.

Actually, wait, no, I take that back. There are a handful of memorable touches, and they’re all moments when the show seems to have temporarily lost its mind: Ellen starts to sing what seems like it will be a particularly flavorless ballad, then unexpectedly takes a bite of a giant pretzel and continues singing through a mouthful of bread. A Times Square microcelebrity introduces himself with an absurdly ostentatious costume maneuver and a hilariously deadpan announcement. A song about the virtues of failure is “ruined” by the entire company missing their cue. A lively plot beat involving a scam with Swedish tourists seems to have been teleported from a Looney Tunes universe. These were moments when the cast truly seemed unleashed, and were the most fun to watch.

A particular standout is Jay Klaitz as abrasive Cousin Eddie (who seems to have shed the massive brood sported by Randy Quaid in the movies). He is an agent of utter chaos, and reliably disrupts any creeping blandness with powerfully insane hick-schtick. His schemes are bonkers, his caffeinated energy jolts the show back to life, and the hints that he is a filthy pervert get the biggest laughs of the night. Eddie’s sheer weirdness keeps the second act aloft, and it’s a ludicrous miscalculation on the show’s part that we’re forced to wait so long for his introduction.

In fact, it’s Eddie-style nonsense that suggests that there might be a soul hidden away in this show after all. It comes in glimpses through the comedically talented cast, like a surly ticket-clerk copping an unnecessarily snide attitude, or a tiny duck-onesie-wearing Times Square costume-character who adopts an inexplicable (and hysterical) gangster persona. A back-alley psychic is deeply entertaining and has, ludicrously, a staff of about a dozen dancing helpers. There’s an inspired gag in which Clark tries to pay for illicit tickets without his wife noticing... while they are engaged in the physical act of love.

When the show got truly absurd, I leaned forward in my seat. When Clark and Ellen mused about the nature of marriage, with hetero-upsetero dialogue that could have been transplanted from any episode of King of Queens or Modern Family, I had time to sit back and let my gaze wander over the production design. (It’s very nice.)

But maybe this isn’t a show that wants me to lean forward. I get the sense that it’s instead meant for the people it’s about: straights from the suburbs who drove into Manhattan for a squeaky-clean time like it’s Branson, Missouri. The producers intend to bring the show to Broadway in 2023, and without spoiling too much, I can't imagine any audience except one comprised entirely of tourists appreciating the final note, which is, essentially, “Fuck New York, let’s go back to Skokie.”

If this is a musical meant to validate the lifestyle of suburbanites, okay, fine, best of luck with that. But it’s worth pointing out that this is a cast capable of doing much, much more.

The Griswolds' Broadway Vacation is at the 5th Avenue Theatre through October 2.