Who she is and what she is doing don't fit into tidy categories. Kelly O / lettering Mike Force
Tweet

Like a cross between a drag queen, a clown, a glamor icon, and a bug.

"Make work that's serious. I've tried. It always has a
comedic edge to it."


Cherdonna is like if you put a drag queen and a modern dancer and a person with psychological issues into a blender, and then poured the result into a vintage gown. She falls, she squeals, she breaks things, she vogues, she takes off her clothes, she loses her mind over inanimate objects, she expertly lip-synchs entire monologues from old movies, and she even sings occasionally. Poorly.

She is a human spectacle who makes you feel species shame. She's brilliant.

The first thing audiences try to do is figure out who she is and what she is doing, but who she is and what she is doing don't fit into tidy categories. She's not a drag queen—technically, she's a bio queen or a faux queen or a female-impersonator impersonator or a female female impersonator. She's not a modern dancer—or at least she is the last thing you'd think of when you think of a "modern dancer." And yet she has the chops. As choreographer Wade Madsen says, "In one movement, I can see classic jazz to an abstract shape from Graham to a release improvisational slow movement to a grounded moment in yoga." She's not a clown—or if she is a clown, her main joke is that you feel vaguely uncomfortable and confused in your own body. 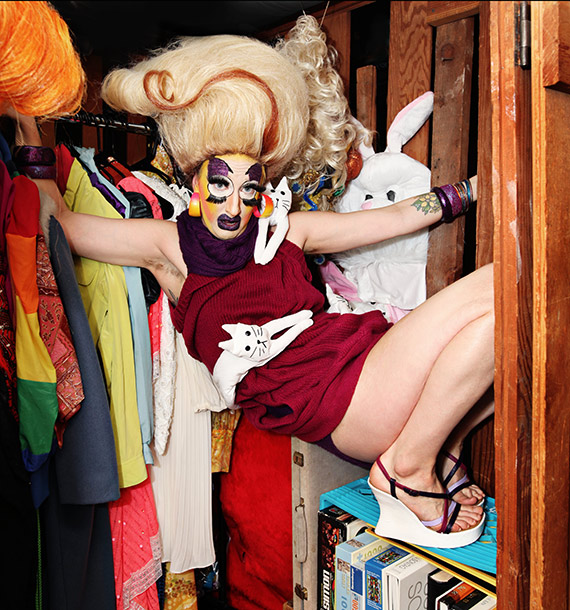 She had three backup dancers who held her in midair and launched her, insect-like, toward individual audience members.Kelly O

During Worth My Salt, her first full-length solo show at Velocity last year, she had three male backup dancers, in togas and Greco-Roman haircuts, who held her in midair and launched her, insect-like, toward individual audience members. She would get very close to the audience member, her arms and legs and gaze pointed tightly at them, and then retreat backward through the air, her arms and legs expanding out, and then choose another audience member and bear down toward them, frighteningly. Hilariously.

She is not precious about her work. She choreographs elaborate sequences and destroys them over and over. She is more generative than you would think; she makes far more work than her audiences ever see. "I'm not going to stop making shit," she says. "It's the only thing I like to do." She was recently named a finalist for a National Dance Project production grant for a proposed collaboration with Orkestar Zirkonium, a Balkan marching band that would compose original music and play it while being integrated into the narrative of a piece, the working title of which is One Great Bright Brittle Altogetherness.

Having already broken the rules of modern dance, drag, and clowning, she's recently been breaking the rules of straight theater. For a few dates in May 2015 at 12th Avenue Arts, late at night, she performed new work on the set of an existing Washington Ensemble Theatre play—a wagon wheel, some dirt, a scaffolding-like structure, even the theater's utility closet became fodder for her uncategorizable spectacle. At one point, she leaned down and scooped up rocks and sand in her arms and started filling the leotard she was wearing with them. Then she solicited an audience member to help fill in her back. The audience, which had been confused at first, was roaring by the end.

"My new idea is I want a theater company to do a full production of a play, and I get to come in and do whatever I want throughout the whole play, and they don't interact with me at all or see me," she says. Dear God, please make that happen. Dear world, please do not stand in her way. Dear National Dance Project, please give her that grant. We need to give Cherdonna whatever Cherdonna wants. Cherdonna is a genius. Cherdonna for president.

Cherdonna, Winner of the 2015 Stranger Genius Award in Performance