He designed Who's Afraid of Virginia Woolf? at Seattle Repertory Theatre, The Pillowman at ACT, and Our Town by Strawberry Theatre Workshop. Kelly O / lettering Mike Force
Tweet

Is a scenic designer who estimates:

"A great tool for editing."

Says the complicated sexual relationships at the old Annex Theatre:

Were once diagrammed on a pizza box during a party.


Scenic designer Matt Smucker talks about objects as if they have rich inner lives. In his world, a cement block can "gesture," the corner of a room can be "aggressive," and a void can have "style." While many designers simply decorate their stages, Smucker conjures physical environments that seem to perform alongside their actors—they have a sense of movement, even when they're not moving.

His recent set for Who's Afraid of Virginia Woolf? at Seattle Repertory Theatre lashed out at its audience. Smucker designed it in a V shape—as if the audience were sitting in one corner of a living room—and gave it a barely perceptible upward tilt. Then he carefully stuffed it with books, abstract expressionist paintings, Asian and African artifacts, and boxes of games (a nice symbolic touch for an Albee play) that looked ready to fly off the shelves and into our faces. That was the "aggressive" corner I mentioned earlier: a 45-degree angle that simultaneously retreated from the audience and attacked it.

Smucker grew up in a Midwestern Mennonite family, came to Seattle in 1995, and quickly fell into the hurly-burly of Annex Theatre. "I claimed to be a set designer," he says. "They believed me." (Annex is where he met his late wife, the director Andrea Allen.) In the fringe theater world, he learned that tight budgets don't have to be the enemy. "You can use the frustration of limited resources," he says, "to create a solution that's more interesting than if you'd just thrown money at the problem."

That adaptability and sense of surprise, even when the production is moody, is the watermark of a Smucker design. ACT Theatre's in-the-round production of The Pillowman, for example, began with a monolithic gray cube covering the entire stage. Smucker introduced the audience to that play about cruelty and censorship by shoving its face against a wall. (That Pillowman also featured the unforgettable image of a small girl crucified on an illuminated cross.)

But Smucker's work isn't all aggressive corners. His 2008 set for Sarah Ruhl's Eurydice, also in the round at ACT, was an eerie, abandoned swimming pool—a wistful environment for that moody play about love after death. But that's not all: A descending elevator car transported characters into the underworld, and inside the elevator it was raining. 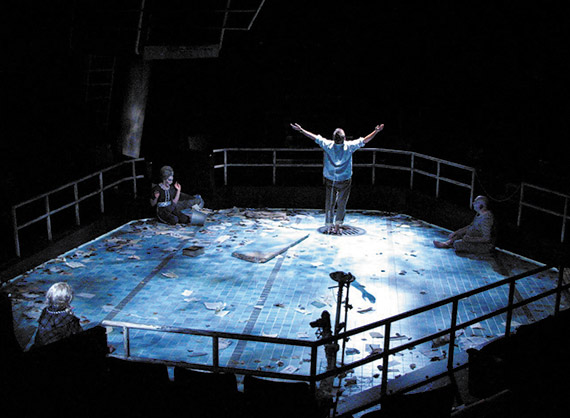 Smucker’s set for Eurydice at ACT.

His set for Our Town, which inaugurated the main stage at 12th Avenue Arts, was designed with leftover stuff from the construction of the building itself: ladders, paintbrushes, scaffolding, sawhorses. It was a radical set (the play's opening stage directions command "no scenery") and a thoughtful one, marrying Our Town's themes of community to what was happening in Seattle's real-world theater community: That production was the founding of a new home.

As of this writing, Smucker is designing Anne Washburn's Mr. Burns, a Post-Electric Play, in which some unarticulated catastrophe obliterates the world's electrical power. Over three acts spanning 75 years, we watch the survivors recount—and distort—an episode of The Simpsons until it becomes an operatic epic. The challenge, Smucker says, is trying to imagine "the art a future civilization makes, creating that game of cultural telephone, projecting ourselves forward." What kinds of architecture will survive? What kinds of musical instruments? What will be meaningful?

Every audience, Smucker says, comes into a play with visual expectations. "You can honor those expectations or subvert them," Smucker says. "Or take them and make something that feels both unexpected and inevitable."

"There’s no formula for us."