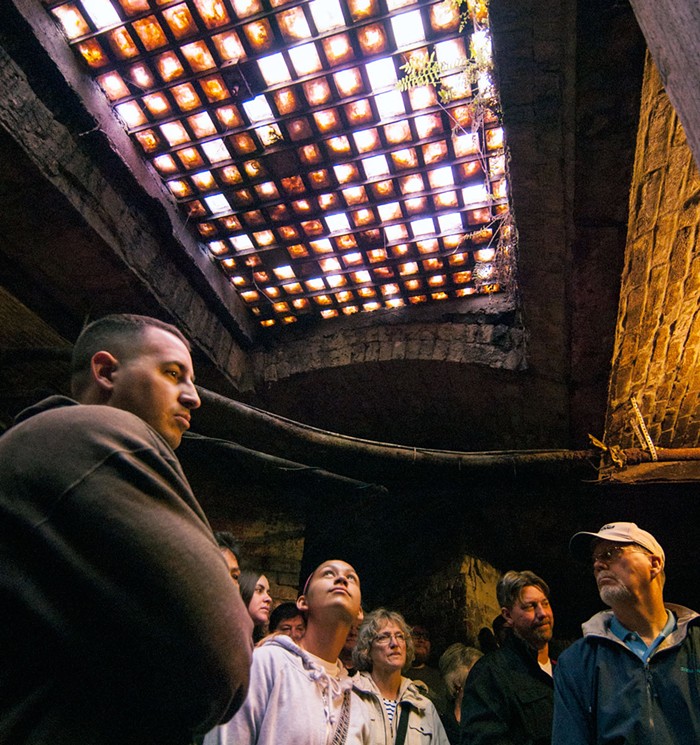 From Savor Seattle to the Seattle Obscura Society, these are the most fascinating, delicious, heady, spooky and downright cool tours of the city. Check out a breakdown of Seattle’s best tourist attractions here.

Learn about how Seattle's original streets were once literal rivers of human waste, how a benevolent prostitute created the public education system, and how a lazy immigrant started the fire that burned it all down in 1889 during Bill Speidel's Underground Tour. More importantly: As you lament the ongoing nightmare of your new hometown's transit imbroglios, it may come as some relief to understand that this city, like so many other pre- and postindustrial American conurbations, was founded and framed by thieves and idiots. The tour was created in 1965 by an ambitious publicist who both understood and typified the maxim of the entrepreneurial huckster: If you've got a giant pile of garbage that you can't dispose of, put a sign on it that says "Private Property. Admission $18." (PRO TIP: The tours are guided by genial and talented performers. Slip yours an extra $10, and they may take you down to the sub-sub-basement. I obviously can't disclose what they keep down there, but it lends a whole new historical context to the term "beast mode.")

Started in 1997, these true-crime van tours have been featured on TV shows including the BBC's The Last 48 Hours of Kurt Cobain. The company offers 2.5-to-3-hour true crime and historical tours of Queen Anne Hill and surrounding areas (which covers the 1995 warehouse arson fire and Seattle's worst mass murder in Chinatown), and of Capitol Hill and surrounding areas (which covers Kurt Cobain and Ted Bundy). They also offer ghost tours and a "Booze, Broads & Jazz Tour," where you'll end at a cocktail bar after visiting the sites of Prohibition-era clubs, brothels, and gambling houses.

"Real ghost hunters" guide these 90-minute tours of what they claim to be the city's most haunted sites, focusing on "actual paranormal investigations." Their offerings include the Pioneer Square Ghost Tour, a "Haunted Pub" tour, a "How to Murder" tour (where you'll see crime scene photos), and actual underground ghost hunts. Your tour ticket also gets you into the Seattle Death Museum, featuring coffins, embalming tools, and vintage mourning jewelry.

Choose from tours of Pike Place Market during regular hours or early in the morning before it opens; a "Chocolate Indulgence" tour (stops include Dahlia Bakery for local mogul Tom Douglas's famous coconut cream pie and Fran's Chocolates, a reported favorite of the Obamas); a "Gourmet Seattle" tour that includes cuisine from an Iron Chef winner and James Beard Award honorees; a seafood-focused progressive dinner, “Seattle Dinner Soiree,” featuring four renown local restaurants; a “Hip on the Hill Tour” of noteworthy Capitol Hill eateries; or the "Booze 'N Bites" tour, during which you'll get five cocktails. Tours range from two to three hours and include anywhere from 12 to 18 food and/or drink samples.

Learn about the city's most important beverage on Seattle by Foot's signature tour, the Seattle Coffee Crawl. During the 2.5-hour walking tour, you'll stop at cafes for at least six different samples, and you'll learn about different brewing techniques, types of roasts, and the philosophies that make each coffeehouse unique. There's also the private (six-person max) Caffeinated City Tour, and Seattle Kids Tour, a morning stroll to downtown's most children-friendly haunts.

The Wing Luke Museum offers two regular tours of its neighborhood—the busy International District, known for its complicated history and incredible restaurants—both of which include admission to the museum itself. On the three-hour Bruce Lee's Chinatown tour, you'll learn about the famous martial artist who lived and was buried in Seattle, see highlights including his first martial arts studio and first practice space, and eat a meal at a local restaurant featuring some of his favorite dishes. Take the comprehensive 90-minute Touch of Chinatown option and you'll learn about the neighborhood's history, sights, and smells from a local guide. On Friday afternoons, carefully curated neighborhood food tours are also available, with different themes throughout the year: "The Rice Stuff" (through June), "Grilled Things and Chicken Wings" (July through September), and the "Twilight Noodle Slurp" (October through December). And finally, there's the INS Building Tour around the old U.S. Immigration & Naturalization Service Building, where new immigrants started their new American lives (available select Saturdays in July and September).

Former Stranger pot writer Tobias Coughlin-Bogue called this one of the best ways to see behind the scenes of the legal weed industry, as it grants you access to facilities that would otherwise be closed to the public. On the 3.5-hour tour, you'll start at swanky Diego Pellicer, watch a glassblowing demonstration, learn how cannabis oil is produced, visit a grow operation, and end at more recreational stores.

The Seattle Obscura Society (a local chapter of Atlas Obscura, an online magazine devoted to the weird, wondrous, and underappreciated) hosts one-off events around the city that celebrate unique, offbeat locations and experiences. Past events have explored the artwork at a former Naval Air Station and current park, a distillery focused on producing unique liquors, and the cemetery where many of Seattle's pioneers are buried. Check their website for future opportunities to explore unique parts of Seattle.

These "rock & roll sightseeing tours" play up the nostalgia for Seattle's early 1990s grunge and rock scene. Stops on the 2.5-hour van tour include the space where Pearl Jam and Soundgarden used to rehearse, the bar where Nirvana played, the home where Kurt Cobain died, and more.

Where to Celebrate National S'mores Day 2020 in Seattle

A S'mores-gasbord of Options for August 10, From Sundaes to DIY Kits

Support Black Music: A Guide to the Seattle Artists You Should Be Streaming Right Now

Spicy, Avocado-Based, Pineapple-Infused, and More Tequila Drinks To Try on February 22 (Or Any Time)