Best Places to Get a Drink in Seattle 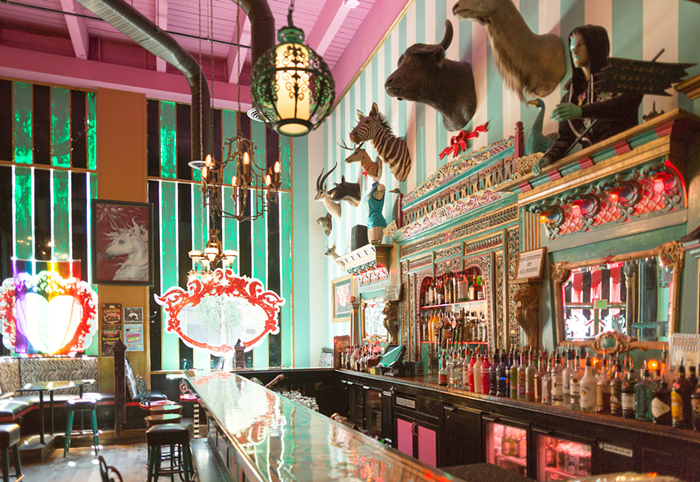 Hankering for a drink and maybe a bite, but don't know where to go? Never fear: We've hand-picked a selection of Seattle's prime watering holes, from the humblest dives to the kitschiest tiki bars to the schmanciest craft cocktail bars. Read on to discover the places where you can snack on complimentary Goldfish crackers and Cup of Noodles alongside luxe libations, play arcade games and eat fried "unicorn balls" amid circus-themed decor, grab a beer in a place where Kurt Cobain used to hang out, and more.

Award-winning "whiskey and bitters emporium" Canon has a hundred-drink menu and a ridiculously extensive liquor library. With more than 4,000 labels and counting, they boast the largest spirits collection in the United States—their whiskey menu alone is 176 pages. In the spirit of excess, their menu warns, "Alcohol, eggs, sex, undercooked foods, and most enjoyable things in life can and will kill you if you give them enough time. Live life to the fullest until then." JB

This Olive Way speakeasy is hidden away in an unmarked building. You ring the doorbell to enter, and they accept reservations only through text. If it sounds gimmicky, don't worry: With excellent craft cocktails and a Filipino-inspired menu, this place has far more to offer than mere charming mystique. The steak tapa sliders (with Velveeta cheese and a kiss of Kewpie mayo, which makes everything good) and duck-fat-fried patatas bravas are so delicious, you'll catch yourself daydreaming about them the next day. JB

Inside this dark bar resides one of the most lighthearted happy hours in town (4 to 7 p.m. every day). Billed as "ridiculously" happy, its snacks are snarky but its drinks are serious. Most intriguing, perhaps, is the Daily Punch! (exclamation point theirs), basically a negroni punched up with sparkling wine—a fun, smart twist on an old favorite. Fun is the operative word at this happy hour, where the free Goldfish crackers flow with as much ease as the smiling bartenders' ordering advice, and the "faux pho ramen" doesn't cost anything at all. Of course, if you ask for one, you might learn it's just Cup of Noodles fancied up with lime and herbs. NT

Tucked away in a nearly secret spot below Pike Place Market, this gorgeous downtown hideaway (which possesses the dubious honor of being referenced in Fifty Shades Freed) is the Platonic ideal of a cocktail bar. It's romantic, intimate, and not too crowded, with solid craft cocktails and an unpretentious, classic Mediterranean-inflected menu. JB

With stiff drinks and good food, 100-plus-year-old Hattie's is one of Ballard's most beloved dives. There's also karaoke on second and fourth Thursdays and, occasionally, other live music in the bar.

Under the baleful watch of a taxidermied buffalo, Capitol Hill has hung out at western-themed Linda's with shots and pitchers of beer for more than two decades, with the additional benefits of a pool table, a good jukebox, comfy booths, and a-okay burgers. Weekend breakfasts are served until the generous-to-the-hungover hour of 3 p.m., and the back patio is pure summertime awesomeness—get there early to stake out a table on sunny days. (Tourist note: This is reportedly the last place Kurt Cobain was seen alive.)

On one side, Mecca is an old-timey counter-and-booth-style diner for those times when only dependable diner food can hit the spot—and dependable it is. On a bad day, one of their good, greasy breakfasts or hot open-faced turkey sandwiches might just save your life. On the other side, there's one of the world's best dive bars—narrow, noisy, and well-loved, serving cheap, strong drinks with a no-nonsense attitude. The bar is always dark, timeless, and weatherless, like an alcoholic submarine, and you can still smell the scent of cigarettes past.

This graffitied Capitol Hill bar straddles the precarious balance of hip and divey without being too hip or too divey. The pickle-back shots are a one-two punch of bracing vodka and savory brine, and Moscow mules flow forth from a tap. Perhaps best of all, you can grab Malaysian street food takeout from Kedai Makan next door and bring it back to the bar to savor. JB

The Pacific Inn Pub is an unpretentious place to drink with cheap beer, a jukebox, and superb fish 'n' chips. Located in the Stone Way crawlspace between Fremont and Wallingford, this true neighborhood dive is sure to please all old-school Seattle enthusiasts.

Like any good tiki spot, Hotel Albatross buys deep into their own mythology, spinning a legendary yarn on their website about their origins. Inside the Ballard corner bar, though, things are more real-life: Punk music plays loudly in the cavernous space, the menu proffers an eclectic mix of cuisines, and the tiki focus stays mostly at the bar. NT

After transplanting from Lower Queen Anne to Capitol Hill, this Seattle classic has managed to preserve—even improve—its commitment to tiki life. Hula Hula doesn't half-ass anything—the entire bar is thatched and tiki-ed, and even the karaoke hut is decorated with Hawaiian-themed records. NT

This bar cuts across a continent, bringing sun-starved Seattleites directly to the shores of the Caribbean Sea. The bar snakes around the room like water hugging a coastline, encouraging a melting of the Seattle freeze as patrons are forced to (gasp!) look toward each other. The bold turquoise-blue seats add pops of color rarely seen in tandem with the flannel and fleece of the local uniform. But neither the bartenders nor the patrons here are beach bums: Rumba, with one of the biggest selections of rum in the country, caters to rum nerds. NT

The Masonry might be Seattle's coolest beer spot. On a recent visit, the bar was lined with beautiful people who were dressed well and drinking interesting beer while a vinyl record played in the background. The original location in Lower Queen Anne is an intimate space off Roy Street with graffiti art on the walls and built around a wood-fired pizza oven, while the Fremont location is an expansive, light-filled space with a long bar and plenty of seating. Both have impressive beer lists. The Masonry is the type of place where you can throw a dart at the beer menu and still end up with an amazing beer. Their ability to get kegs from some of the most sought-after breweries in the Pacific Northwest—and the world—is seriously impressive. They serve good pizza and food as well, somewhat of a rarity in Seattle's best taprooms. LB

Drinking beer in Ballard is a formulaic process. It basically involves nursing IPAs in cold warehouses while fighting with babies and dogs for a place to sit. It's a redundant formula, but when the IPAs are good, all of those babies suddenly seem worth it. And the hoppy beers at Reuben's are not only good, they're prestigiously good. Since opening six years ago, Reuben's has won dozens of national and international awards for their beers, including three gold medals in the last three years at North America's premier beer competition, the Great American Beer Festival. LB

The Pine Box is a familiar staple of Seattle's beer scene, and for good reason. Located an easy climb from downtown or an easy descent from Volunteer Park, the Pine Box is housed in a building that was once a funeral home, known for hosting Bruce Lee's funeral in 1973. With comfortable booths and plenty of room, the Pine Box has one of the best curated beer lists in the city, including hard-to-get kegs like Holy Mountain, Cloudburst, and Machine House, as well as a smattering of great out-of-state and international beers. LB

Add-a-Ball is a retro-style arcade and pinball joint that serves booze and snacks to its quarter-laden patrons. It's like the basement you wish you'd had when you were 14, if you were 14 in 1983. They also have a huge back room named Point Break with a whole wall of diner-booth tables, so you can hang out forever playing weird and awesome pinball.

Come to the Garage for bowling and billiards in a pretty, late-1920s setting with unusual and above-average pub food that includes truffle potato chips, poutine, and garlic kale.

Mox Boarding House—a game store with an impressively large and varied selection, bright and airy interiors, and a long history of hosting everything from board-game competitions to official Magic: The Gathering set releases—is home to what is widely considered the default nerd bar: Cafe Mox. It has large tables, borrowable games, 16 taps, good food you can eat without ruining your cards, and friendly staff that won't judge you for nerding out for hours.

Unicorn—with its absurd name, rampant stripes, salvaged carousel panels, and menagerie of taxidermy—is insane. The bar serves Jell-O shots, and the place gets wild. The food is carnival-style deep-fried, including various corn dog configurations, "unicorn balls," and elephant ears, as well as good, inexpensive burgers made with Painted Hills beef. Downstairs lies Narwhal, Unicorn's secondary bar, which hosts additional sources of alcohol, as well as arcade games, extremely dark corners, and a stage from which small glories like the weekly Mimosas with Mama drag brunch are recurrently presented.

The Stranger made mistakes in 2020.

Good News: These 58 Major Seattle Events That Were Canceled Due to Coronavirus Now Have New Dates

Here Are the Details So You Can Plan Ahead

Taku and Milkie Milkie Open, Plus More Seattle Food News You Can Use: March 13, 2020 Edition