Justin Colt Beckman's new show at PUNCH Gallery, Honky Tonk, is a transformation of the urban white cube into a functioning country bar. 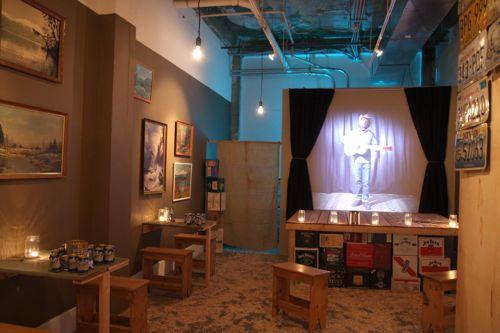 Beckman, like most (all?) of the members of PUNCH, lives not in Seattle but in Thorp, Washington, a rural town of a few hundred people about an hour and a half southeast of here. (Last year, Christopher Frizzelle wrote a piece about going to Thorp to see these artists, replete with a photograph of the old general store burning down in 2007.)

Beckman decided to bring this honky tonk to Seattle after noticing that plenty of hip Seattle bars and restaurants were going country—serving "rustic" fare, hanging dead animals on the walls, offering up ironic-chic dishes like wild boar sloppy joes. He wanted to know what city people wanted from country.

It makes me wonder whether American cities today get their strength from simply having become more rural. People are tearing out their lawns to grow food. There's been talk of extending farmer's markets year-round. The DIY movement is just another form of old-stock self-sufficiency. Used-clothing stores are like a communal hand-me-down system for a family that's bigger but just as thrifty and self-contained as the one on the farm.

The same goes with construction-salvage stores. I don't have all that much in common with my mother, who grew up on a farm in Jeffersonville, Ohio, and has lived in the suburbs since the late 1960s, but when I bring up salvage materials I've just adapted for my house or thrift-store dresses I've just mended, it's like we're discussing a shared ancestral trait.

Comments 6
Tags: Visual Art Blogs City
The Stranger depends on your continuing support to provide articles like this one. In return, we pledge our ongoing commitment to truthful, progressive journalism and serving our community. So if you’re able, please consider a small recurring contribution. Thank you—you are appreciated!
CONTRIBUTE NOW