A Memorial to TUBS 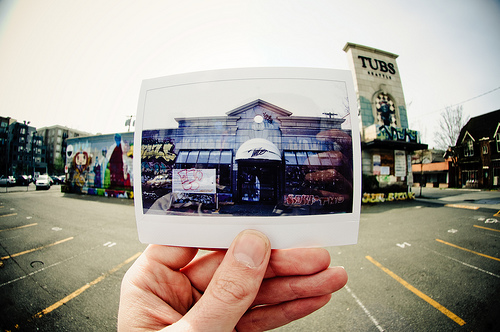 Not having grown up in Seattle, I was not privy to TUBS, the legendarily skeezy hot tub joint I've heard so much about in the U District. It opened in 1982, and then suddenly, in 2007, it was gone, its used tanning beds, hot tubs, and linens and towels up for auction.

Soon the TUBS building will be gone completely. The spot at 50th and Roosevelt is about to be developed into a 60-unit apartment building with ground-level retail.

This building has quite a past: Between 1905 and TUBS-time, it was a residence and small commercial space, a grocery store, the Big Bear Store, the Lucky Store, the P&C Serve U Grocery, a car dealership, the District Tavern, and Fotomat Drive-thru.

Fittingly, Free Sheep Foundation is throwing a memorial party from 2 to 6 pm Sunday (April 26). The building has already been decked out with murals and window installations by more than 20 artists. There's a Flickr page already. (The images this page, both by Slightlynorth, are from there.)

Free Sheep are the people who brought you the Bridge Motel closing and the Belmont sendoff. They're like a roving crew of commemorators, marking the spots where the city is changing, making space for attention to be paid. It's a simple, powerful, and great idea they've got, and if their other projects are any indication, then the TUBS Memorial Mural Project will be worth checking out. From Free Sheep's statement:

FSF would like to invite the public to view this artistic intervention with the same heart as viewing cherry blossoms in spring. This temporary project is meant to serve as a beautiful display of color in the waning days of a building's demise, as well as a re-interpretation of site and celebration of the city. In partnership with the property owners, we offer this gift to the neighborhood and the world, embracing our rapidly transforming urban landscape.

As the project was getting underway last month, KING 5 did a segment on it—not as urban commemoration but as Graffiti Gone Wild!! If there's anything TV news is dumber about than sex, it's art. (See example from just this morning.)

Comments 31
Tags: Visual Art Blogs
The Stranger depends on your continuing support to provide articles like this one. In return, we pledge our ongoing commitment to truthful, progressive journalism and serving our community. So if you’re able, please consider a small recurring contribution. Thank you—you are appreciated!
CONTRIBUTE NOW