I've been out looking at art all day and came back to my computer to find this on Facebook: 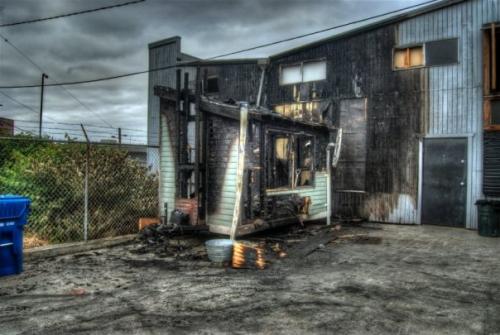 The photograph is so beautiful, I thought it couldn't be real. But it is.

It's not an artwork—it's an artwork that went down in flames this morning after what authorities are calling an "accidental transient fire," says Scott Lawrimore.

The fire—probably started when someone broke into the back sculpture yard of Lawrimore Project on Airport Way and was smoking—destroyed the SuttonBeresCuller artwork There Goes the Neighborhood, a 2005 portable "living room" in a trailer that they've trekked into suburban neighborhoods all around King County. 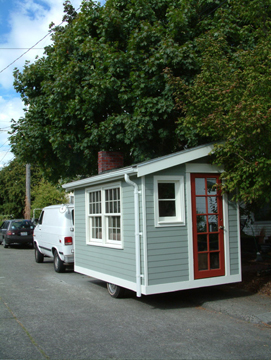 No other art was damaged. The firefighters rescued some artwork that would have been in the line of fire of their hoses, such as an Isaac Layman photograph, but contained the water well enough that the basement-full of crates of art from the last show, phot(o)bjects, was saved, Lawrimore said. "They could have easily flooded the basement, but they didn't," he said.

The damage to the building is minimal, including charring and a few windows blown out. He estimated it at around $5,000.

This happened on the eve of Spite House, Lawrimore Project's next show, which opens tomorrow night. "It's funny in the context of this show, which is full of so many fuck-you gestures," Lawrimore said. "I wish I could say it was an artwork, but it very much is not."

To make "lemonade from lemons," the gallery will set up a bar in the back for tomorrow night's opening—and serve flaming cocktails.

Here is a link to more images of the destroyed There Goes the Neighborhood, which was for sale for $8,500. Awful. 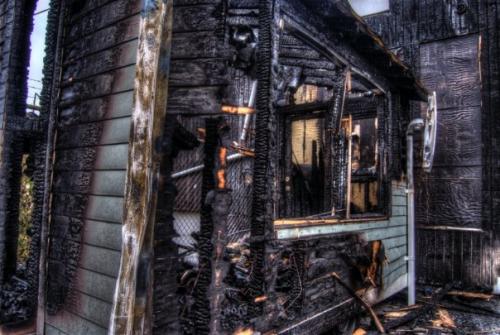 Comments 13
Tags: Visual Art Blogs
The Stranger depends on your continuing support to provide articles like this one. In return, we pledge our ongoing commitment to truthful, progressive journalism and serving our community. So if you’re able, please consider a small recurring contribution. Thank you—you are appreciated!
CONTRIBUTE NOW