There's Only You and Me, and We Just Disagree

On her blog Another Bouncing Ball today, Regina Hackett takes issue with my enthusiasm for the new Frye director:

Jen Graves wrote today that she didn't think the Frye could have hired someone better. True, if the museum insists on maintaining the delusion that its collection is tip top. I was looking for somebody who'd figure out a way to free the museum from the dead hand of the past, to move the Frye's holdings into storage, deaccession and trade up.

(Graves also wrote Danzker's exhibit, William Hogarth: Nationalism, Mass Media and the Artist, was "awesome-sounding." Awesome? Hogarth is an illustrator in the worse sense of the word. He belongs in picture books accompanying stories.)

1. Hackett tries to portray Birnie Danzker as a one-note Munich Secessionist. To this I can only respond: Did you actually read her resume or just the press release? It isn't really true that Birnie Danzker has "chosen to focus" on the Munich Secessionists. She spent 13 of her 32 years in the business running the Villa Stuck in Munich, but even her time there was expansive, yielding major traveling exhibitions of African (curated by Okwui Enwezor) and Chinese art.

2. There is no delusion that the Frye's collection is "tip top." I have never in my life met a single person who harbors that delusion. This non-tip-top collection is nevertheless the founding collection and the museum must deal with it. Birnie Danzker's show brought some great stuff here; of course it also was full of weirdo duds, as I wrote at the time. That's the story of the Munich Secessionists. Telling it isn't selling it.

3. I cannot even address a person who dismisses Hogarth.

William Hogarth, 1743, The Visit to the Quack Doctor 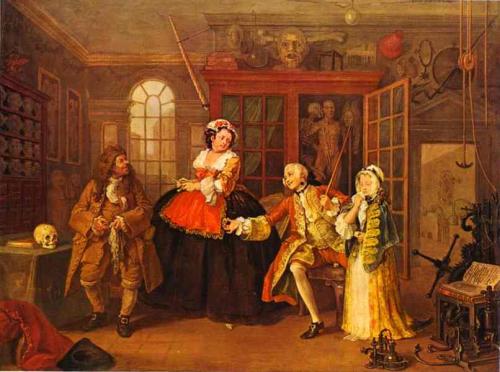 Comments 19
Tags: Visual Art Blogs
The Stranger depends on your continuing support to provide articles like this one. In return, we pledge our ongoing commitment to truthful, progressive journalism and serving our community. So if you’re able, please consider a small recurring contribution. Thank you—you are appreciated!
CONTRIBUTE NOW