Now Akio Takamori of Seattle has created sculptures based on photographs, then retranslated those sculptures back into photographs taken by the photographer Richard Nicol. During a residency in Denmark last year, the American artist (originally from Japan) found himself observing Northern Europe from his particular cultural vantage point. He was taken with images he found by Danish photographer Rigmor Mydtskov, and those became the source material for his porcelain figurines. Then, he took snapshots of each figurine until he determined the angle he wanted to use, and instructed Nicol to create a well-lit, refined image from the chosen perspective. He printed the images on thick German drawing paper, which gives them the quality of watercolor paintings. The edges of the photographic images are as blurry and indistinct as the bumpy edges of the little sculptures. 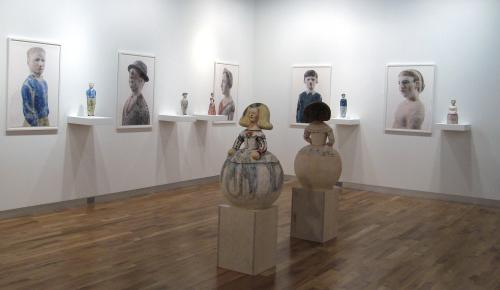 The way Takamori installed the sculptures and photographs, they can be read either in groups of like things or unlike things. I was drawn first to the "like" pairs—each sculpture with its own photograph (the time element is prominent here, your awareness that every sculpture preceded and therefore is somehow the original of every photograph). But I quickly noticed how not like they are. The sculptures often seem set at a certain angle so that the viewer cannot replicate, while standing there, the angle of the camera. You cannot see in three dimensions, then, what you see in two. Photography comes across as the most unstable of elements, making even these highly fictive figurines look more real by contrast. At the same time it is the photographs that carry the charisma of the personalities. The expressions in the photographs somehow seem different from the expressions on the figurines, even though they aren't at all. More pronounced.

Zoom out—you are the camera now—and the room is a web of personalities incompletely glimpsed by each other according to the way the figurines and photographs are placed: which direction they face, how close they are to one another. The queen mother, the Spanish maid, the writer, the comedian, the teacher, and the scolding Dutch grandmother—each coming from a world of their own but brought to bear in this middle zone. The photographs are almost like thought bubbles that express how they want to be seen, projections. It's also possible to see them the other way around, as almost political photographs intended to dictate a specific character back onto an otherwise messy human. See? Photography and sculpture: like peanut butter and chocolate.

In the back of the gallery are photographs by Danny Lyon. The show is up through December 19.