Irishnesstimes!: The Right Honourable Desmond Guinness in the House 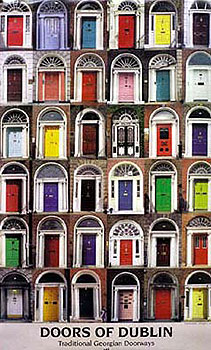 I am Irish. In part. My Irish family name is Considine. (I also have a French Canadian family line with the name Balthazard. Do those names kill, or what?) I also once ran a marathon in Dublin. I ran it slowly. The weather was 39 degrees, rainy, and headwinds in all directions (science was shocked!)—kind of like the way the weather has been around here for the last few days (minus the strong winds). The Irish Times headline the day after the marathon read, "Marathon of Suffering." I do not run anymore.

The point in telling you all this is that it is nearly St. Patrick's Day and I am kicking off the celebration tonight at the Henry, with a talk by the Right Honourable Desmond Guinness—a character who is crazy about Irish architecture, lives in a castle, is the great-great-great-great grandson of Arthur Guinness (founder of the brewery), had a fascist/anti-Semite mother who invited Hitler to her second wedding, is a master of foxhound hunts, married a princess, had one relation who famously sat silently in the House of Lords for 72 years without ever speaking a word in debate, and had another relation whose early death inspired John Lennon to write the song "A Day in the Life."

The man is Right and Honourable.

At tonight's appearance he'll screen a movie about preserving Irish architecture—those Georgian doors!—and then talk. Tomorrow he's Grand Marshal for the downtown St. Patrick's Day Parade, which I believe involves quite a lot of waving.

This is the REAL meaning of green.

Comments 13
Tags: Visual Art Blogs Architecture
The Stranger depends on your continuing support to provide articles like this one. In return, we pledge our ongoing commitment to truthful, progressive journalism and serving our community. So if you’re able, please consider a small recurring contribution. Thank you—you are appreciated!
CONTRIBUTE NOW