Out in the middle of the desert in New Mexico is a grid of silvery, pointed poles planted in the ground in a pattern that stretches one mile wide by one kilometer long. This is where I went, for the first time, last week.

That's the photograph provided by the Dia Foundation, which owns this classic piece of land art, by the artist Walter De Maria. None of your own photography is allowed. There is one other photograph that Dia provides upon request, too: 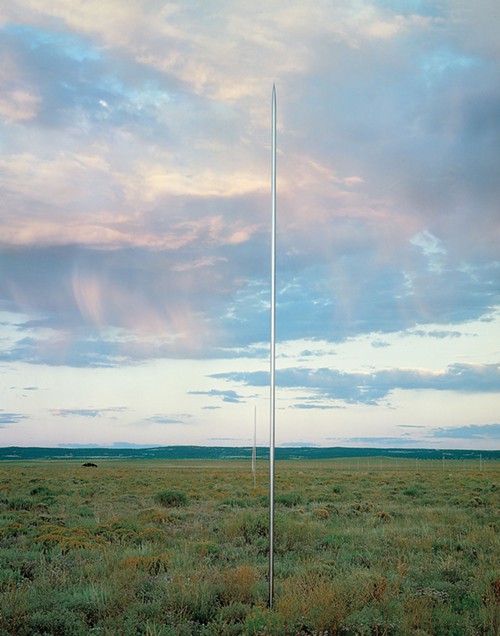 Those are the two competing visions of The Lightning Field, which was created in 1977, and has been receiving visitors since then. There is a cabin that sleeps six people on the property—an old wood cabin built by homesteaders in the early 20th century and updated (given a kitchen and bathroom) after 1977.

But it's the other version of The Lighting Field that feels more like what De Maria intended. He left a set of instructions at the cabin, including that you should really experience the place alone and over a duration of at least 24 hours. (You are only allowed to stay at the cabin a single night, and this leaves you with just a little less than a full day.) These instructions are meant to help you notice what happens to the piece over a period of time that lasts far longer, and has far more dimension, than a photograph. In his series of lectures Pictures of Nothing, the late Kirk Varnedoe points out that almost nobody ever sees lightning at The Lightning Field, anyway: There are, on average, three incidences of lightning near the field during lightning season, which only lasts about three months every summer. De Maria wrote in his instructions, "The invisible is real," and I don't know exactly what he meant by that, but I think he also meant that in some ways the visible is unreal, or less real than it seems to be in this eye-centric culture. The iconic photographs carry falseness by their very nature.

So that's how I walked into The Lightning Field, which you get to by way of a driver who meets you in the closest town—45 minutes away—then drives you out to the site, making dozens of turns on unmarked dirt roads, knowing it all by heart. No one ever shows up unannounced, she tells you. How could they? No one but the family of the caretaker (Robert Weathers, who's been doing it since the beginning, and this is his daughter now driving you) knows how to get there, except maybe the housekeepers, who keep the simple place immaculate and leave you dinner.

This was the background for my trip. This was what I knew and what I thought before I arrived. I wasn't ready for what was about to happen.

Comments 8
Tags: Visual Art Blogs
The Stranger depends on your continuing support to provide articles like this one. In return, we pledge our ongoing commitment to truthful, progressive journalism and serving our community. So if you’re able, please consider a small recurring contribution. Thank you—you are appreciated!
CONTRIBUTE NOW