So Much Local Art It Hurts: Fourteen—14!—Shows

Last weekend I saw so many art shows in the city—14—that I'll spread them all out in front of you buffet-style. You can go to see every single one of these. (Hurry to the first one!) 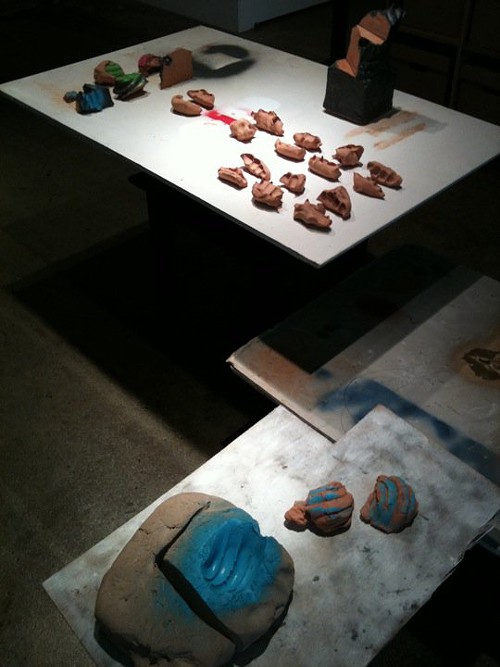 1. Ben Waterman, The Grand Rooms, at Gallery4Culture through today.

This will be the longest review, because Waterman is a really exciting young artist I haven't written much about before. He has a pitch-perfect but offhanded way with material (he uses lots of different stuff, but clay, fabric, cardboard, and spraypaint come to my mind as major elements) and color (often neon or metallic), almost as if all he has to do is flick his wrist and watch entire atmospheric landscapes fall from it.

These landscapes aren't anything like traditional landscapes—there aren't mountains and rivers and whatnot—but instead are like the byproducts of a self-conscious body camping out in a dirty city that also happens to feel like the moon. I see Waterman's relationship to Northwest artists like Nicholas Nyland, Chauney Peck, Eli Hansen and Oscar Tuazon, and Wynne Greenwood (in addition to the UW ceramics teachers he studied with); but also LAers like Amanda Ross-Ho and Anna Sew Hoy; and basic art-world eminences like Gerhard Richter, Bruce Nauman, and Robert Rauschenberg. 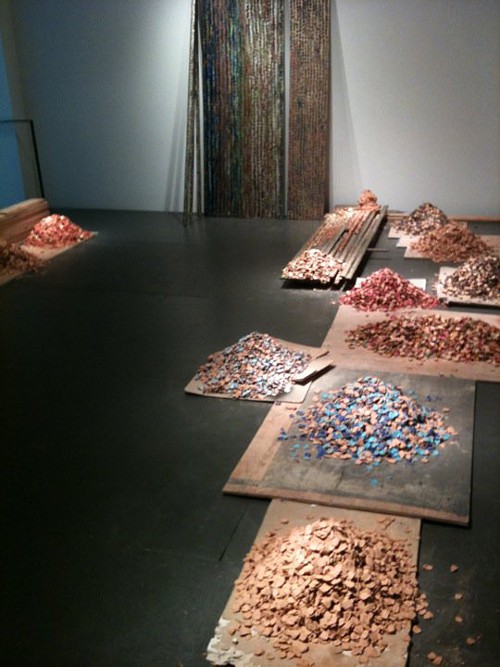 All of which is why I feel comfortable saying that he is somebody I think could also benefit from a swift kick in the ass. He doesn't edit enough, which means his work can feel trendy in that discarded-shit-strewn-around, Unmonumental sorta way. He can do better than hiding behind messiness or obscurity. It feels like he's playing at the edge of making you call bullshit on his work, and when the work wins you over, you realize you can believe in something new, believe that something inanimate is actually full of life. The blue-spraypainted clumps of raw clay that stand in for a mouth and two hands are primitive and postmodern, like a coyote under a gargantuan digital billboard. There are not enough little moments like this, where color, shape, and material come together in an unholy, righteous union that justifies itself beyond any external "meaning" it might point to.

The major work in the show, 17 Lines (Each Over 400 Feet)—a process work in which the artist laid down thumb-pressed bits of clay and spray painted over them to create a Richteresque layered abstraction, then put the thumbed bits in obsessive piles next to studly wood planks—feels like a breakthrough. It is a painting made and unmade at the same time, soft as a thumbprint but determined to stack itself into existence/importance—which is an endearing determination to expose, maybe because it's so damn familiar.

So, humbly I ask: Less, please. But also: More, please. 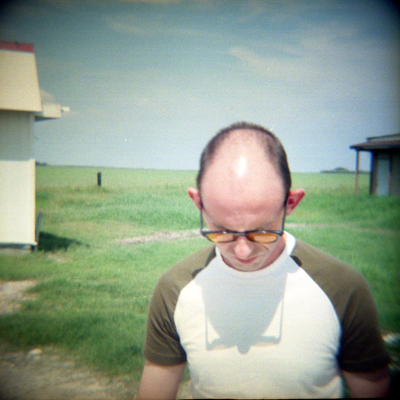 3. Eric Eley, Look Out, at Platform Gallery through October 9

This is where old photographs taken by Eley's grandfather out the window of a fighter plane in World War II get filtered through Eley's layered abstract geometry—which sounds promising. Unfortunately, the installations struck me as cold. Was it something to do with the middling scale? This one floor piece is like a groovy version of the Space Needle.

I once wrote that I hoped that Nola Avienne would do more in her career than cleverly arrange magnet filings, and I have felt guilty ever since—both because that is a catty thing to say, and because, clearly, she intended to. 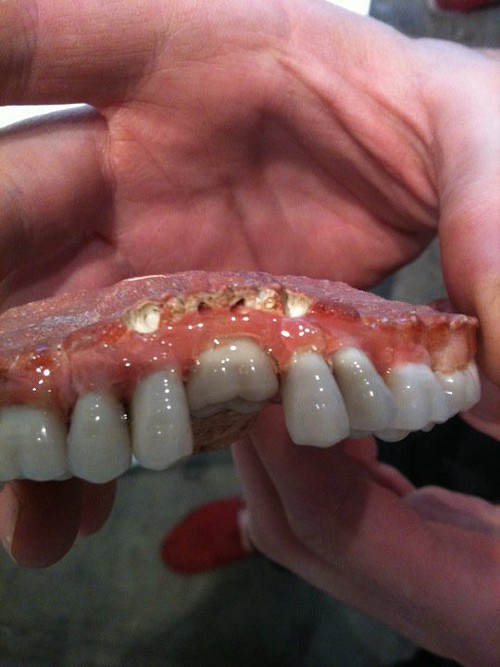 Avienne has lately been working in blood and crystals, and this latest show at SOIL includes an entire wunderkammern in which she creates a Victorian/gothic/postmodern collection of tests and displays and statements that make you love her and want to touch them, and make you slightly afraid because they are uncanny and even gross. (The more unheimlich, the better: I do not like them when they are cutely historical.) She is looking for answers and content not to find them—she mocks science while practicing it (for some of her work involving blood, she actually became a licensed phlebotomist). You might say she's a little bit Sol LeWitt, a little bit Deb Baxter, and a little bit Jennifer Zwick, plus a lot just Avienne.

Kirk Lang, as far as I can tell, makes machines that do not do what they invite your hands to try to make them do. I like this, although I don't like the feeling of "getting" it and then being done.

Jana Brevick is a mad scientist who makes things that look like and sometimes are jewelry. They also are robots and satellites and all manner of obsolete and quaint metal futurism. I always cheer for them, and they seem to have come from a bunker. A bunker for very small things.

As a whole, this show, Beaker, seems to suggest that artists toy with science but are separate from it—even in time. Avienne's in the 19th century, Lang's solidly Industrial Revolution, and Brevick is in her bunkers, which I believe date to approximately Soviet Russia. Science is oldtimey? It's not quite enough to hang a show on, even though the artists have much to recommend them. (This seems to happen often at SOIL, where themes for shows can be diffuse, overly abstract, or just dull.)

Goofy, gooped-up rocks three ways: in watercolor on paper, in thick drippy oil paint on canvas, and as a pile of sculptures in the corner. They are not fresh, but they are sweet. 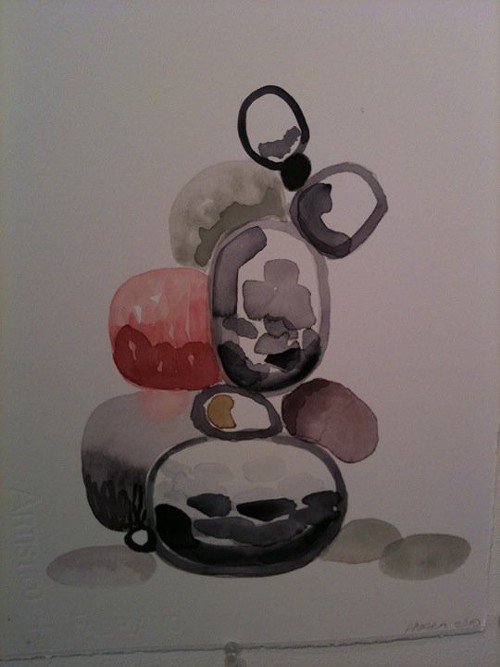 6. Primitivo Suarez-Wolfe. You already heard about him.

7. NEPO House, still available by appointment. My column on it here.

Face Time is a simple, artist-driven way of opening up Seattle U's streetfront art gallery (the Hedreen, on 12th) during "non-art" hours. Hansen lined the place with tools and hosted craft night. (I got my hands on a chainsaw in honor of a chainsaw carving class an editor once made me take, in which i carved a mushroom and considered a career change because of the immense satisfaction of wielding the saw.) The week before, Emily Pothast and David Golightly gave a 12-hour performance; you don't know what will happen until you get there and share the night. The best part has to be students coming by and discovering their own school's art gallery for the first time; these aren't exactly art shows, but more community-building events.

Partum is a small but full show, set to burst, divided into the first, second, and third trimesters of the artist's first pregnancy. (And she just had her baby a few days ago.) Jennifer Zwick applied her signature wit and style to her new condition. A photograph of her giant belly—the late-pregnancy stripe streaking down it—sticking out through a canvas covered in floral fabric is an update of an earlier painting called Hello, which featured a pair of breasts smiling out, satirically but friendly, from the same surface. Both images are instant icons. Added to them is a making-of photograph, which pictures a behind-the-scenes side view of Zwick pushing her belly through the canvas to create the frontal image. It's a making-of in several senses: she's making a baby, she's making a self-portrait, and she's making the first portrait of her first baby. She's also both celebrating and critiquing the isolation of the female body into reproductive parts. The images are funny and uncomfortable.

Zwick is never afraid to be modest or goofy; her work is not self-important. This may cause some to overlook her, but that would be a mistake, because her photographs and paintings have energy, grace, intelligence, and warmth. A series of relatively austere, small paintings of interlocking colored lines on wood refer to her anemia in her second trimester; they form a stark contrast to the exuberant portraits of exploding fireballs with tiger faces and shooting stars from the first trimester. In the third trimester, Zwick pictured herself lying on her back, her belly jutting up into the air and forming a platform for objects—a trophy (look what I've done!), a red suitcase (where are we going?)—just before the end/beginning.

11. Jason Hirata, Let me be a stranger, The Living Room through October 6.

This from Jessica Powers's great review of what this encrypted exhibition of text and case-of-beer-tucked-under-a-blanket-under-the-stairs is all about:

To disappear into one's art is one thing, but to disappear from one’s own art is another, and a pretty radical gesture at that. Granted, his most recent exhibition at The Living Room in Seattle, Let me be a stranger, includes an ingenious variety of documentation that laid out his careful planning and revealed the hidden machinations of the piece. Using text messages to lure random individuals into a perfectly logical but bizarre art-making-by-proxy process, Hirata meticulously timed and planned each step of his plan down to the last detail. Indeed, some of his directions and notations are nearly lyrical in their complexity and mystery. They speak to a participant, but the artist remains behind a veil:

“good job, you're almost done. your final set of instructions along with another bonus can be found around the corner behind a stack of insulation, on the left-hand side. you will see its corner sandwiched between the insulation and the wall. when the elevator comes up, i will grab the instructions, put them in my jacket, and take it down to the garage. i will walk past the participants, and around the corner to my car. I will get in, and begin driving home. across from this stack of insulation is an elevator.”

The full transcript of Stranger is thrilling, almost as if one is being placed within a spy movie. But the excitement doesn't come from a sense of fantasy or escapism. It comes from the way Hirata opens up the possibility of true everyday life, that you actually could have something magical and bizarre happen to you, and that malaise and boredom aren't inevitable.

Again, not fresh, but sweet. Fiebig's landscapes are also obsessive textiles, and Moriyasu's fu dogs are landscapes in themselves (a la Claire Cowie).

14. Brian Gillis, NO!, at Kirkland Arts Center through October 6.

This Eugene, Oregon artist's show is less about the impulse to resist and more about moving past that impulse into the systems that actually facilitate—or block—resistance and disobedience. The art here is dry by design: The idea is not to exercise (or exorcise) the feeling of rebelliousness but to explore and extend the ways it wends through systems that might help it along: Journalism, vigilantism, reading and writing and flyering (there is an actual office—"a modern-day printing press," as curator Cable Griffith describes it, set up for you to use), alternative gardening, alternative transportation, etc. The most abstract of the sculptures is a safe attached a computerized safe-dialer that's continuously trying to crack the lock. The other works endeavor to extend art beyond itself: Tomatoes, for instance, are growing hydroponically in the gallery. Their crop will be donated to Hopelink, a local charity, after the run.

Are you full yet?