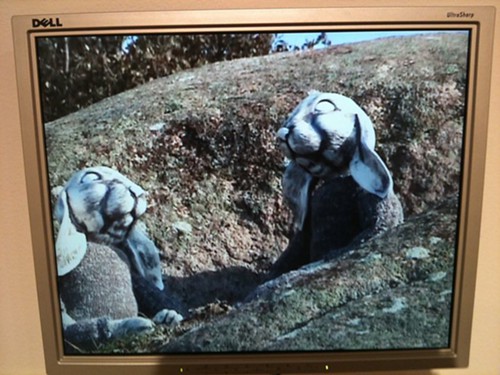 The group show Man and Beast at SOIL includes Jacob Foran's eerie life-sized ceramic dogs, a humming rock by Debbie Reichard, and Nidhi Jalan's charming claymation video Supper with a Vulture, in which a girl and a vulture eat and become each other over the course of the meal.

But I was most drawn in by Timea Tihanyi's video of two rabbit figurines set in an ancient-looking landscape. The rabbits don't move. But the camera does, changing focus from one rabbit to the other according to the soundtrack: a back-and-forth from one of Plato's Socratic dialogues about the nature of courage. What is courage? Is it a lack of fear? Faith over fear? Can non-human animals be courageous? What if the highest human thought is no more resolved than the intentions of rabbits?

While the brain wanders over abstract ideas, the eye starts to fall for this silly, endearing scene, and to enjoy believing that these serious male voices and their intellectual explorations are coming from these rabbits. There's some sort of cosmic letting-go here, like when Woody Allen's character asks his father, very seriously, whether there's a God, and the father responds, "How would I know? I barely know how to use the can opener."

An attitude to live by.

Comments 0
Tags: Visual Art Blogs
The Stranger depends on your continuing support to provide articles like this one. In return, we pledge our ongoing commitment to truthful, progressive journalism and serving our community. So if you’re able, please consider a small recurring contribution. Thank you—you are appreciated!
CONTRIBUTE NOW