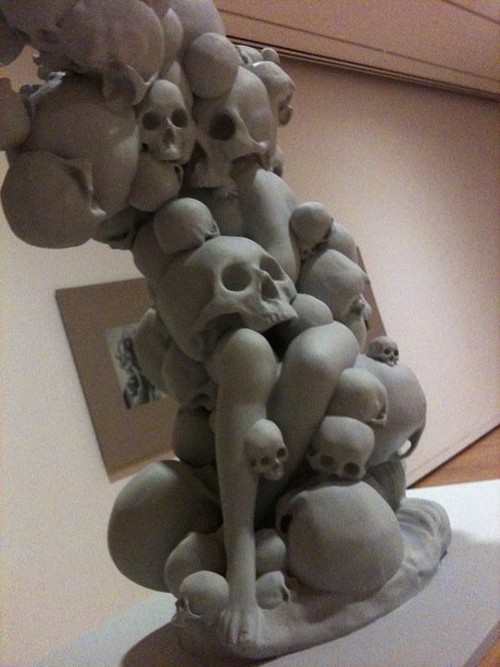 Picture an imperturbable seated classical nude, her hair upswept, a piece of fabric draped loosely around her hips. She is a sculpture, maybe carved of a piece of white marble. She sits—this is where she lives now—in a light-drenched museum room, with other historical ideals.

Cris Brodahl, a female artist (Belgian) who works with antique images of women, took this figure and recreated her. The process released a tornado of death: The figure's seated body now rises up into a twister of skulls piled on each other. That's the white version. 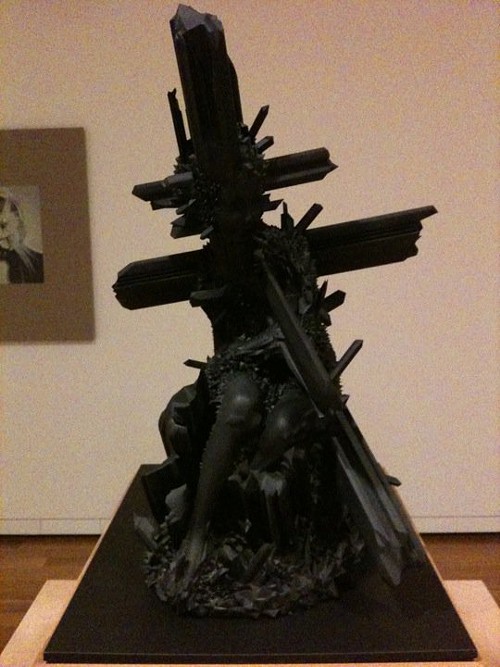 There's also a black version, which sits across the gallery. In that one, crystals explode out through the figure's skin in a beatific, million-point crucifixion. The smooth, curved female body has given way to this new growth pattern, angular, regular, rectangular. The sculpture's surface is matte, but the proliferation of crystalline facets makes you imagine it shimmering. Some of the crystals are so young, so small, that parts of the body look covered in hair. It is a completely seductive, disturbing object.

As the bodies are consumed and reconstituted, they gain new dead life. One type of undeath becomes another. And as in ballet—check out the new Natalie Portman movie's portrait of pink asceticism—there is no visible pain. The faces remain blank. The processes are highly controlled, highly satisfying, and very creepy.

See the sculptures—and other works by Brodahl—in her solo show at SAM.